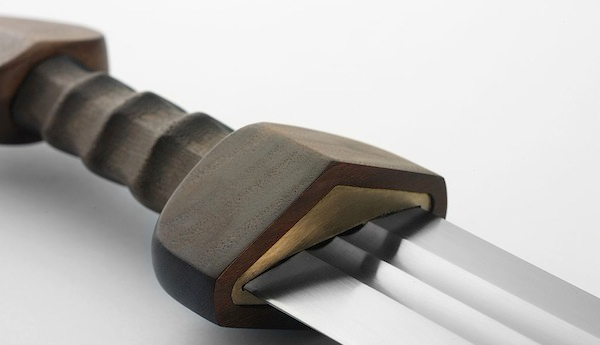 They cast me in Julius Caesar because I’m good at pretending to be surprised by murder.

Our aim was for Brutus. You’ll just have to trust me when I say he deserved it. The director told me the aim was for Brutus, he told me Brutus deserved it, and he gave me a figure and a cash advance. He told me who was in on it: Julius Caesar, Cassius the Conspirator - and now me. They wanted somebody strong and reliable in the chorus, because they weren’t all as accustomed to the act as I was. They were all committed to the job, don’t get me wrong, he said; but until you’ve truly gone through with it, you don’t know for sure. My job was to rehearse the big crowd scene just like an ordinary extra, and wait for the signal. We were going to do it during a performance. The audience were going to be our witnesses and our alibi. I told the director it was a ridiculous idea, and he doubled the figure. I said I’d do it.

For many long days I had to pretend to be interested in moving about like an angry Roman citizen, and playing learn-everybody’s-name games.

I didn’t see Cassius or Caesar until our first full cast rehearsal, and then never alone. We all knew, though, so it didn’t matter. Caesar was a gent, polite to everybody, from the lowliest sentry to the actors with laurel wreaths on their doors. The woman playing Cassius was formidable and haughty. I liked her. A few days before the dress rehearsal, we all watched a full run-through of the play for the first time. I watched Cassius convince Brutus - our target, Brutus - to murder Julius Caesar, and I admired her for being able to do that.

Our scene - the post-assassination riot - looked pretty funny if you picked a single person out. You’d see a Roman citizen so angry he’d pick up a table and move it to… just there… and put it down very precisely. Or if you picked Liberty - yes, that was her name, a great coincidence, and the line “Liberty! Freedom! Tyranny is dead!”, became even more famous in rehearsal, the number of times the director shouted it to set us off – if you picked her to follow you’d see a Roman citizen angrily skipping about the stage perimeter, throwing papers into the air like confetti. But if you watched us all as a group we looked impressive, though I say so myself. Cinna shouts that tyranny is dead, and the crowd comes together with an angry, riotous whoosh - and when the last citizen leaves the stage, my goodness: what a seamless scene change.

Opening night happened. The first performance happened, then more. Reviews were clipped and pinned onto dressing room walls, or the green room dartboard depending on their content. I was getting impatient. I was here to act: not pretend, like everyone else. A week of shows – two matinees a week, mind you - went by before I said something to Cassius, quietly, as we passed in a corridor. She told me to wait. I asked if she was having doubts. Her look assured me no: I’d never been so assured.

On a night like the others, we arrived at the theatre to a message that the director wanted to see the whole cast. So we found out all together, gathered in the biggest dressing room where the lowly roman citizens kept their bottled water. The director told us he’d been thinking about the assassination scene - and that stupendously exciting moment of mob rule, we were doing so well, undoubtedly a highlight, a critical consensus on that - he’d been thinking about it, and he’d had a word with the lighting designer, and they were going - as an experiment, for tonight’s performance - they were going to add strobe lighting to the fray. The cue had been pre-programmed, but he was telling us out of courtesy, of course; and did anyone have any medical objections?

Nobody had any medical objections. Those of us with aesthetic objections kept quiet.

The director said that was great news, break legs and hearts everyone, he would see us tonight, after the show. I didn’t need to look at Cassius to know tonight was the night we’d been waiting for.

“It’ll look absolutely fucking shit,” said Mark Antony, sotto to Cinna, as the principles filed out and left us to change into our togas.

I found myself uncharacteristically impatient. Us citizens didn’t have anything to do until Act Three, so I went for a loiter backstage. Act Two was just starting and Brutus was in his orchard, whining away. I looked at the trees painted onto the backcloth. They’d used this for another play - I could see where they’d painted over the cherries, made them into pears and apples. A cheap thing to do, but then I guess I’d cost.

Brutus said, “It shall be by his death.”

Ha, I thought. More than he knows. Brutus whittled through more self-pitying pentameters and I got bored. I never cared for pre-mortem regret, myself; plenty of time for that afterwards, if you must. Then:

“Between the acting of a dreadful thing and the first motion,” I heard him say, “all the interim is like a phantasma, or a hideous dream…” I felt like I was hearing those words for the first time. They got into my bones. I tutted at the melodrama of it all and got shushed and glared at by a passing stage assistant, and I went to put my sandals on.

If I had to put my dagger on the point where Brutus might have sensed the slightest of somethings, I’d say it was when Caesar changed how he pronounced his punctuation. It was Caesar’s big moment - or one of them - just after he’s been killed and just before he dies, which I understand in Shakespeare is often a window of a good few minutes. Caesar’s dying line has always been: et tu Brute? and you note that question mark. I’m no critic but he was good at that bit, the disbelief at the betrayal he could cram into those four syllables. Well, tonight, things went a little differently: Caesar played it as a sentence ending with a full-stop. As good as told Brutus what was coming, straight out. I could see Caeser, leaning right in to his face, clutching Brutus by the top of his toga - if only we had modern-day setting, costumes with grabbable suit lapels - Caesar leering the line out, not to the audience tonight, but right into Brutus. I couldn’t see Brutus’s face, but I saw a stiffening in the sinews of his neck and I thought - Caesar’s playing it cocky, because he knows he’ll be lying a distance away in a minute, the safest of us all, alibi-wise. It was a rash thing to do, but I wish I’d been able to see Brutus’s face on that et tu. Well played, Caesar. Cassius saw it and we made eye contact, but only with peripheral vision. Too late for anything else now. Caesar was dead, and our little crowd of angry romans readied themselves for the whoosh.

We were all waiting for our cue. Poor Cinna didn’t know what he was in the middle of. He opened his mouth to kick off the kickoff: Liberty! Freedom! Tyranny is dead! - any second now, any moment he’d shout it, any moment - maybe he was enjoying the pause more than usual, or maybe I wasn’t - but the moment took long enough.

Then he said it. He barely got to freedom when

The citizens did their shouting, their enraged gestures and their big faces, their cries of disbelief, screams of fright; their first jumps and jogs into places, towards props. I went into action too. I ran forwards. Darted left.

Between the acting of a dreadful thing -

Between the acting of a dreadful thing and the first motion, -

And the first motion -

A lap through the riot and back. Let them all see you. Go past them all.

Right turn. Up to the scrum of conspirators. Guided by Cassius. In.

An interim phantasma or a hideous dream

Between the acting of a dreadful thing and the first motion, all the interim is like a phantasma, or a hideous dream -

And, after the first motion, there’s nothing to contend with but strobe lighting, the tumult of toga’d bodies, and a care to not get your own hands on the handle of the knife.

I threw some foam rubble around so it looked like I was trashing the Capitol alongside my fellows. In a flash of strobe, I saw Cassius looking at Brutus, and in the next flash she was bending down to Caesar, cementing an alibi for them both.

Offstage and out we citizens rushed, leaving Caesar lying in his dramatic, tragic, deliberately dead sprawl; leaving Cassius and the other conspirators in their correct places; and leaving Brutus in his place too, his new place, dead on the ground. His pose wasn’t as dramatic as Caesar’s, and his blood wasn’t as red either.

A few of Liberty’s scattered papers floated to the ground.

I wonder how long it took the mob sitting out there in the seats to realise we’d brought Act 5 onstage a few hours early. I bet some of them didn’t know the play had ended prematurely until they were on their way home, wondering whether they dozed off during friends romans countrymen.

A stagehand was the first to scream.

They never caught us.

Cassius and Caesar had their alibis, naturally; they were meters away from Brutus when it happened. Caesar hadn’t even been alive. It was harder for the citizens, which made it easier for me. Thirty-odd extras had been dashing about the stage, unused to the strobe, even more confused than usual; they hadn’t seen anybody near Brutus, or, they couldn’t remember, maybe they had, but they didn’t notice, no, not at all, too busy trying to concentrate on their own blocking, you see – did they know anybody with a grudge against Brutus? No, not at all, of course not… unless, perhaps the police might want to think about a suspected love triangle between x, Brutus, and z that they’d once heard about from… the spaghetti tangle of motives you’d expect from so many show business citizens all, logistically, equally capable of doing the deed - well. The sword had everybody’s fingerprints on it, and not mine. Liberty, freedom, tyranny is dead. That phrase has changed for me, now.

I had a semblance of a defence all ready, if it came to it. A mix-up in logistics, an accident of under-rehearsal. I held the sword and he did run on it. But it never got that far.

Rose Biggin writes stories and plays, and once won a poetry slam by accident. She has been published in, amongst other places, Retreat West's The Colour of Life and Jurassic London's Irregularity. This is the first publication of this story.