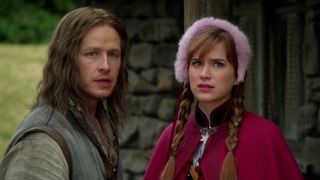 The great thing about this show is that no one has a thought they don’t immediately express (including Emma, who is always more than willing to talk about how she doesn’t like talking about her feelings). It’s the exact opposite of my current obsession, The Good Wife, which also features beautiful villains and the complicated goodos with whom they fight/team up/have sex. So watching the two shows side by side is really pretty fun. I should do a comparison some day.

We open with the Storybrook A-plot, where Elsa, wigged out by the crowds and traffic in Storybrooke (yes really – a town where evil witches regularly stride down the middle of the empty main street, past the one stoplight we’ve ever seen has ‘traffic’ and ‘crowds’) erects an icewall around the town to keep anyone from leaving until she finds Anna. Aaaand… credits.

But he big revelation of the episode comes from the Enchanted Forest B-plot. We open on Anna wandering through the fields toward a familiar-looking hut. She knocks and when the door opens we discover that David used to be Fabio, right down to the hair. Wow, his hair.  This show has committed some massive crimes against hair before, but this might be the actual worst. Anyway, Charming is friends with Kristof (because it totally makes sense that an ice-cutter who was raised by trolls in a distant kingdom would know a shepherd who lives at least one major sea-journey away. Maybe they’re pen pals?)

And then THE BEST THING EVER happens: we meet Bo Peep, who is… a warlord with a magic shepherd’s crook. She is also rocking an awesome, blood-stained dress (it is, of course, poofy) and a bad attitude. I love her immediately. Charming and his mother owe her some money and can’t pay and he wants to run away from his problems, but this show believes with all its might that running away from problems is A Bad Thing. So instead Anna (going by Joan, in one of several tiresome Frozen call-backs the writers shoehorned in) tries to talk him into standing up to Bo Peep instead. Then, I kid you not, Anna teaches him the art of swordplay in a single day.

Storybrooke: We find Henry packing a basket (literally, a basket) for Regina, who is still upset about the whole Robin Hood thing and so hiding in her house and wumping. Henry, you see, Googled break-ups and learned that ladies who have had their hearts broken like to dull the pain with ice cream and red wine. Delivered in a basket. By their adopted son. Thus the basket full of ice cream and wine.

Clearly as weirded out by the prospect of having a fourteen year old suggest she self-medicate with red wine as I am, Regina sends a crow (by way of Westeros??) to tell Henry… not to come over? Or something? This sends Henry into a sulk, because he has no friends and no hobbies and no life outside of going back and forth about which of his two mommies is really his favourite mommy. Or something. Emma gives him a little heart-to-heart at Granny’s (because, again, Henry has nothing going on in his life and that’s where he goes when he’s upset) and, in the midst of their conversation, the power goes out. Elsa’s icewall knocked over a power-line, it turns out, so Emma leaves Henry to go investigate with Charming.

Icewall: Emma and Charming arrive and are appropriately impressed by Elsa’s styrofoam wall, and then Hook pops up out of… somewhere. Like a bush, or something. He literally just appears from nowhere. He naturally takes the opportunity to try to get Emma to talk about her feelings. Emma is like, ‘hey, I think I see a thing over there’ and runs away so fast her dust spells ‘woosh’,  then David and Hook have a really awkward discussion about Hook’s intentions. Yes, intentions. Between intentions and the basket, I’m beginning to suspect that the episode’s writer spent the summer rereading Austen.

An aside: it is really weird when Emma and Snow and Charming refer to each other as daughter, mother and father. Because they are all the same age. And it happens a lot in this episode.

Anyway, Emma finds Elsa hiding behind an ice-stalagrofoamite and tries to coax her out, but Elsa still can’t control her powers and freaks out, trapping Emma and herself inside the icewall, with Charming and Hook on the outside. Hook whacks at the ice with his hook, which is kind of cute. Emma immediately starts freezing. Probably because she doesn’t ever zip up her jacket, or put her hands into her pockets (or in her armpits). I don’t know what you’re supposed to do when you’re dying of hypothermia, but I’d probably start by zipping my jacket up. I mean, if it were me. 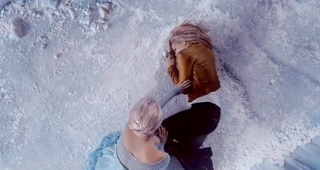 Meanwhile back in the enchanted forest/flashback, we learn that David’s father died in a drunk cart-driving accident when David was six. So now David… something something something to the effect that he has erected a WALL AROUND HIS FEELINGS etc. He and Anna talk about their feelings, but Charming is not yet sold on the whole heroism thing. Though, honestly, Bo Peep is awesome and I’d pay her warlord dues and then join her army in a heartbeat.

Icewall: interior: In a very nice scene, Elsa and Emma have a legitimately well-written and acted conversation (about their feelings, natch). Emma reveals that she has magic too, but isn’t very good at it, and that it intimidates her. Elsa is relieved to learn that she’s not the only person in the world with magical abilities. It is a lovely bit of storytelling because it’s easy to forget that, in the Frozen world, Elsa really is totally unique. It’s also exactly the sort of storytelling OUaT is best at – demonstrating to a bunch of really weird, outsized characters that they’re not alone in the world, and that no matter how weird and outsized they may be, they’re still… well not always human, but they’re still people, and capable of love and goodness. And that they have a place where they can belong, and (if they want to, and if they try hard enough) they can build a home and a life there. That’s Emma’s arc in a nutshell, and it’s mirrored by everyone else on the show, but it’s still great to see the writers use the Frozen characters to expand upon it.

Unfortunately, Elsa still can’t really control her magic, so she can’t save Emma from freezing even though she really wants to. Elsa, lest we forget, really is a nice person who doesn’t want to hurt anyone, but is so afraid that she will that she… erects barriers. GEDDIT??

Icewall, Exterior: Charming and Hook storm into Gold’s shop, where Rumplestiltskin and Belle… are hanging out behind the counter. At night. During a power outage. As you do. A bit of back and forth about the necklace clues Charming into Anna’s identity. Flashback to…

Enchanted forest: Bo Peep… kidnapped Anna? Or something? David heroes up and goes to save her.

Storybrook: David strides manfully through town to… the butcher’s. Because Bo Peep’s a butcher in present-day Storybrooke. A butcher who is spending the blackout in her butcher’s shop, chopping meat. As you do. Chop. Chop. Chop. Her shop is called the Chop Shop and it's two doors down from... well, we'll get there. Charming and Hook yell at the Butcher Peep a bit and then steal her magic shepherd’s crook. That had better not be the last we see of the Butcher Peep, because she’s awesome. I can't find a pic of her chopping (Tumblr is too busy making gifs of Emma and Hook to help out), so you're going to have to trust me. Awesome.

Enchanted Forest: Charming fights Warlord Peep and, uh, ties her up with a ribbon. And rescues Anna and thus learns A Valuable Lesson About Heroism. 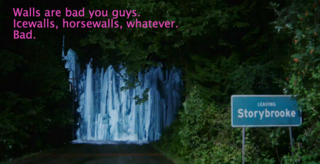 Icewall: David imparts the same Valuable Lesson About Heroism to Elsa, who pulls herself together long enough to melt part of the icewall and save Emma’s life.

Uh, in the C-plot, Snow turns the power back on (by turning on the ‘fuel’) and then gives her baby a high-five. It’s pretty cute. Yay! She will be the best mayor.

Enchanted Forest: Charming’s mother sends Anna off to find Rumplestiltskin, because all roads in OUaT lead to Rumplestiltskin; David gives her his horse (which was his father’s horse) as a symbolic gesture about tearing down the walls we build to protect ourselves. Horsewalls!

Storybrooke denoument: everyone stands around in Snow/Charming’s apartment, talking about their feelings for a while. Finally, Charming and Elsa use the crook to try to find Anna. What they find is her… heartbeat. I mean, really; we’ve got 20 more episodes to go this season.  Charming heroically utters his intent to help Elsa find Anna, and ropes everyone else in. Thus inspired, Henry goes to talk Regina out of her wumpage. ‘You can give up on yourself,’ he Heroically Utters, ‘but I’m not going to give up on you.’ Hugs for everyone!

Then Emma and Elsa go back to the icewall to talk about how cool (sigh) Elsa’s power is. Elsa’s all ‘Because this person approves of me I now have the power to take this wall down!’ But Elsa can’t take the icewall down… BECAUSE THERE’S ANOTHER SNOW QUEEN IN TOWN. And she runs an ice cream parlor called Any Given Sundae. WIN WIN WIN.

She’d better team up with the Butcher Peep, is all I’m saying. Their stores are nearly next door to each other! It must be.

Quote of the Episode: ‘I found it in the store filled with things.’ Apparently Arundel doesn’t have pawn shops. Somehow Emma figures out that, by this cryptic statement, Elsa means Gold’s store.

Theme: OUaT loves to hit its viewers over the head with its themes. This week: PUTTING UP WALLS. And also PULLING THEM DOWN AGAIN. Don't go making icywalls. Or horsewalls.

Missed opportunity: No one (not even the Butcher Peep) says ‘by hook or by crook’ when Hook's wandering around with her crook. I MEAN COME ON.

I have so many questions:

The great thing about this show is that no one has a thought they don’t immediately express (including Emma, who is always more than willing to talk about how she doesn’t like talking about her feelings). It’s the exact opposite of my current obsession, The Good Wife, which also features beautiful villains and the complicated goodos with whom they fight/team up/have sex. So watching the two shows side by side is really pretty fun. I should do a comparison some day.

We open with the Storybrook A-plot, where Elsa, wigged out by the crowds and traffic in Storybrooke (yes really – a town where evil witches regularly stride down the middle of the empty main street, past the one stoplight we’ve ever seen has ‘traffic’ and ‘crowds’) erects an icewall around the town to keep anyone from leaving until she finds Anna. Aaaand… credits.