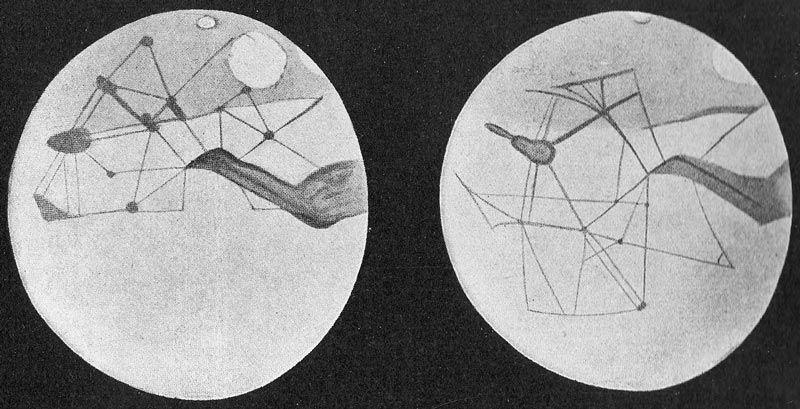 But though in neither case can we tell anything of the bodily form of its unit, we can in both predicate a good deal about their workings. Apart from the general fact of intelligence implied by the geometric character of their constructions, is the evidence as to its degree afforded by the cosmopolitan extent of the action. Girdling their globe and stretching from pole, to pole, the Martian canal system not only embraces their whole world, but is an organized entity. Each canal joins another, which in turn connects with a third, and so on over the entire surface of the planet. This continuity of construction posits a community of interest. Now, when we consider that though not so large as the Earth the world of Mars is one of 4,200 miles diameter and therefore containing something like 212,000,000 of square miles, the unity of the process acquires considerable significance. The supposed vast enterprises of the Earth look small beside it. None of them but become local in comparison, gigantic as they seem to us to be.

The first thing that is forced on us in conclusion is the necessarily intelligent and non-bellicose character of the community which could thus act as a unit throughout its globe. War is a survival among us from savage times and affects now chiefly the boyish and unthinking element of the nation. The wisest realize that there are better ways for practicing heroism and other and more certain ends of insuring the survival of the fittest. It is something a people outgrow. But whether they consciously practice peace or not, nature in its evolution eventually practices it for them, and after enough of the inhabitants of a globe have killed each other off, the remainder must find it more advantageous to work together for the common good. Whether increasing common sense or increasing necessity was the spur that drove the Martians to this eminently sagacious state we cannot say, but it is certain that reached it they have, and equally certain that if they had not they must all die. When a planet has attained to the age of advancing decrepitude, and the remnant of its water supply resides simply in its polar caps, these can only be effectively tapped for the benefit of the inhabitants when arctic and equatorial peoples are at one. Difference of policy on the question of the all-important water supply means nothing short of death. Isolated communities cannot there be sufficient unto themselves; they must combine to solidarity or perish.

From the fact, therefore, that the reticulated canal system is an elaborate entity embracing the whole planet from one pole to the other, we have not only proof of the world-wide sagacity of its builders, but a very suggestive side-light, to the fact that only a universal necessity such as water could well be its underlying cause.

...[Mars] offers another example of how increasing knowledge widens the domain that life may occupy. Just as we have now found organic existence in abyssal depths of sea and in excessive degrees of both heat and cold, so do we find from exploration of our island mountains, which more than any other locality on earth facsimile the Martian surface, its possession there as well.

Another point, too, is worth consideration. In an aging world where the conditions of life have grown more difficult, mentality must characterize more and more its beings in order for them to survive, and would in consequence tend to be evolved. To find, therefore, upon Mars highly intelligent life is what the planet’s state would lead one to expect.

To some people it may seem that the very strangeness of Martian life precludes for it an appeal to human interest. To me this is but a near-sighted view. The less the life there proves a counterpart of our earthly state of things, the more it fires fancy and piques inquiry as to what it be. We all have felt this impulse in our childhood as our ancestors did before us, when they conjured goblins and spirits from the vasty void, and if our energy continue we never cease to feel its force through life. We but exchange, as our years increase, the romance of fiction for the more thrilling romance of fact. As we grow older we demand reality, but so this requisite be fulfilled the stranger the realization the better we are pleased. Perhaps it is the more vivid imagination of youth that enables us all then to dispense with the hall-mark of actuality upon our cherished visions; perhaps a deeper sense of our own oneness with nature as we get on makes us insist upon getting the real thing. Whatever the reason be, certain it is that with the years a narration, no matter how enthralling, takes added hold of us for being true. But though we crave this solid foothold for our conceptions, we yield on that account no jot or tittle of our interest for the unexpected.

Good reason we have for the allurement we feel toward what is least like us. For the wider the separation from the familiar, the greater the parallax the new affords for cosmic comprehension. That which differs little yields little to the knowledge already possessed. Just as a longer base line gives us a better measure of the distance of the sun, so here the more diverse the aspects, the farther back they push the common starting-point and furnish proportionately comprehensive insight into the course by which each came to be what it is. By studying others we learn about ourselves, and though from the remote we learn less easily, we eventually learn the more. Even on the side, then, that touches most men, the personal, the strangeness of the subject should to the far-seeing prove all the greater magnet.

One of the things that makes Mars of such transcendent interest to man is the foresight it affords of the course earthly evolution is to pursue. On our own world we are able only to study our present and our past; in Mars we are able to glimpse, in some sort, our future. Different as the course of life on the two planets undoubtedly has been, the one helps, however imperfectly, to better understanding of the other.

Another, more abstract but no less alluring, appeals to that desire innate in man to know about the cosmos of which he forms a part and which we call by the name of science. Study of Mars responds to this craving both directly by revelation of the secrets of another world and indirectly by the bearing of what we thus learn upon our understanding of the laws of the universe. For the facts thus acquired broaden our conceptions in every branch of science. Some day our own geology, meteorology, and the rest will stand indebted to study of the planet Mars for advance along their respective lines. Already the most alert of those professing them are lending ear to information from this source, and such cosmopolitanism can but increase as the years roll on. Today what we already know is helping to comprehension of another world; in a not distant future we shall be repaid with interest, and what that other world shall have taught us will redound to a better knowledge of our own, and of that cosmos of which the two form part.

Extract from Mars and Its Canals by Percival Lowell (London: Macmillan, 1906)