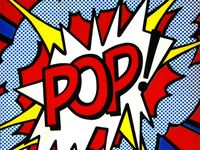 Pop music as we know is a strange little beastie, all sparkly and prickly, brash and uber-opinionated. But it wasn’t born this way.

Most of the roots of contemporary pop music can be traced back to early American blues and soul, with a steady stream of influences all pouring down and becoming what we now know as pop, rock and hip hop - or what I sometimes think of as poprockhop because there are frequently just so many blurred lines.

It probably isn’t possible - or right, or fair - to trace the roots of popular music to just a handful of songs, but I’m going to try anyway.

The story of Arthur Crudup is one that bears testimony to the charge Johnny Otis made: African American artists developing music which was whitewashed and presented by white singers, granting the creators of the music neither profit nor credit. Crudup, born in Mississippi, worked as a labourer for years before he signed a contract with RCA records. Between 1941 and 1956, Crudup released more than eighty sides, including Mean Ole Frisco Blues, Rock Me Mama, She’s Gone, My Baby Left Me and That’s All Right, which have subsequently been covered by bands like Creedence Clearwater Revival, Elton John, Rod Stewart, Canned Heat and of course, Elvis Presley.

It is Elvis who is known for giving the world rock and roll, but it was Arthur Crudup’s song that gave Elvis the means to connect what was then known as ‘race music’ with ‘hillbilly music’. Elvis’s version of That’s All Right probably shocked listeners when they first heard it – never had anything with the strum and bounce of That’s Alright ever been aired on mainstream radio before.

There were many church choir-trained gospel singers belting it out about good, pious, family-style Sunday mornings but none that sang about the raunchy Saturday nights spent dancing and drinking. Ray Charles found a way to bring gospel music out of the church and into the streets.

I Got a Woman was the breakthrough hit for the R&B musician, who combined gospel, jazz and the blues in what would end up being a song that was - after being briefly blacklisted for being obscene - emerged as a seminal song for the entire genre of soul music. I Got a Woman was Charles’ first number one R&B hit and, if it hadn’t been for this song and the defining moment when it tied gospel to R&B, there would be no soul music, no Aretha Franklin, no Al Green and not even Kanye West. Without I Got a Woman, the music of the church and the music of the streets and clubs would never have met.

The electric guitar was just another instrument, just an accessory until it became a star in the hands of the world’s first guitar hero, Chuck Berry. His first single, a 12 bar blues track called Maybellene, peaked both on the R&B charts and the Billboard charts in 1955, confirming that this was no ordinary sound, and Berry was no ordinary musician.

Maybellene is a pioneering rock song that still influences musicians today. It’s about a car race and a girl and a romance gone wrong, it’s guitar driven, unrelenting in its excitement. It cemented Chuck Berry’s guitar techniques, ones that would later be emulated by artists who then became guitar legends in their own right. Berry was an accomplished performer, incorporating gestures and facial expressions to go with the lyrics of his songs. A big beat about a fast car and a love lost - they’re still writing songs like that.

The original singer-songwriter, the original angry young man of folk and rock, and the first to talk about writing poetry to music (Chuck Berry would later explain how he did the same, he just didn’t talk about it the way Dylan did at the time, Berry was no beatnik!) – without Bob Dylan there may never have been any sensitive men with emo guitars. Without A Hard Rain’s A Gonna Fall, would we have had any songs about protest and political turmoil? Probably... but Dylan got there first and Dylan stayed there. Not just folk music, not just rock and roll and not just entertainment - this was music with a Message.

Louie Louie was written in 1955 by Richard Berry, and it’s been covered and performed by many people since then. But the version that had the greatest influence was that of The Kingsmen, a garage band from Oregon who changed the beat around a bit and made it all their own. Their version was horribly recorded, the band barely being able to keep the beat, with singer Jack Ely either losing track half way through or perhaps being really very inebriated at the time - maybe both.

The song was recorded in one take, the band made $50 dollars between them, and, because the lyrics were mainly inaudible, it was also subject to FBI investigations under suspicion of obscenity (the drummer admitted later to accidentally letting the F word fly when he fumbled with his sticks). Regardless, anything with that riff, those twangy guitars and the snarl and whine of the vocals would leave a mark for years. I still have no idea what he’s talking about, but oh baby, we gotta go.

We don’t think twice about the credit producers of records get nowadays. But it wasn’t always this way. Not until The Ronnettes released By My Baby in 1963. The very human and almost frail voice of Veronica Bennet, with her sister and her cousin on the chorus, is protected by the giant fortress of producer Phil Spector’s now legendary Wall of Sound in all its booming glory.

This was one of the first times Spector used an full orchestra in a recording, driving people like Brian Wilson to madness trying to figure out just how Spector created this many-layered sound for the song. Wilson apparently sat around listening to Be My Baby about a hundred times a day until he worked out how to create his own answer to it, The Beach Boys’ Don’t Worry Baby. It still can’t beat The Ronnettes though.

Dancing in the Street – Martha and the Vandellas (1964)

They were calling out around the world and, yes, everyone was ready for a brand new beat, but no one knew where the dancing was supposed to happen. Until Motown’s hit record writing and producing team got very serious about fun. Dancing in the Street started as a feel-good dance number (and was a precursor to the disco of the 70s), but went on to be a cited as a civil rights anthem. Any song that has resonated so far beyond its innocent beginnings to become a call for revolution has, of course, left a deep mark on the landscape of popular music. And without it, we may never have seen David Bowie and Mick Jagger perform together the way they did.

There's seven to start with. You could add in The Beatles too, since their music remains a huge influence on popular music. But I said let’s trace it back to America and so I did. What other songs do you think changed and shaped the way music evolved?

Pop music as we know is a strange little beastie, all sparkly and prickly, brash and uber-opinionated. But it wasn’t born this way.

Most of the roots of contemporary pop music can be traced back to early American blues and soul, with a steady stream of influences all pouring down and becoming what we now know as pop, rock and hip hop - or what I sometimes think of as poprockhop because there are frequently just so many blurred lines.

It probably isn’t possible - or right, or fair - to trace the roots of popular music to just a handful of songs, but I’m going to try anyway.