I don’t know why I’m in this castle or why everything is trying to kill me, but it’s a complicated task, and I’m quickly frustrated by it. A funny thing happens, though. Rather than give up, every failure compels me to try again. And again. And again.

The object is simple enough: collect five orbs, each found at the end of an obstacle gauntlet. Once you have all five, you unlock the final level, where you’ll confront the beer-stein throwing Dark Knight himself. Slay the knight, conquer the castle, rejoice mightily. Huzzah.

I did not get very far on my own, but I improved as I got older. I have memories of reaching an orb without any outside assistance. These are hazy recollections, bursting with pride. But I never beat the game, not all by myself.

The time had come to settle the score.

I went in cocky. I’m guessing it’s been twenty-three-or-so years since I last crossed paths with Beyond Dark Castle. I’ve had some practice since then. Platformers aren’t my go-to genre, and I’ve witnessed players that make me feel like the scrubbiest of scrubs, but I’d still put my running-jumping-climbing skills somewhere north of average.

So of course I was going to beat this game. Of course this childhood plaything would be a cakewalk now. Did this game not know who I am? I’m a goddamn hero, that’s who I am. Look at my Steam library! Look at my fanart collection! Look at my glorious mouse! I abandoned Dark Castle as a girl; I had returned as a woman. I would charge through with the grace and might of an avenging paladin, and my name would be forever emblazoned atop the high scores list, as it was always meant to be.

...yeah, I got wrecked. Five minutes in, and I was reminded why modern luxuries like quicksaves were invented. Let me state, for the record, the thing my grade-school self knew well: Beyond Dark Castle ain't kid stuff.

The thing to keep in mind is this is an old game, and old games do not care about your mental health. If you run out of lives, that's it. So long, farewell, et cetera and so forth. Granted, there is a save function — the Computer Room, in which you can pull a switch to preserve your progress. However, that's provided that you have a chance to actually go back and pull said switch. Cleared two levels, got all the items, fumbled a jump over a spike trap? Sucks to be you, buddy. If you didn’t make a pit stop at the Computer Room, you’re out of luck.

This is especially cruel given that the Dark Castle itself is out for blood. Here is an incomplete list of things in this game that will one-shot you:

Suffice it to say, a great deal of precision is required to accomplish anything in this game. Everything must be lined up just so at all times, which is a bit difficult when you have a glorious mouse that moves like it’s on ice skates. This is a less-than-ideal setup for a game in which my aiming arm moves like a rigored clockhand, and where a split-second can be the difference between swooning success and howling defeat. Allow me to illustrate this by walking you through the Dungeon, a place that conjured an instant memory of my father looking heavenward and saying “oh nooooo.” 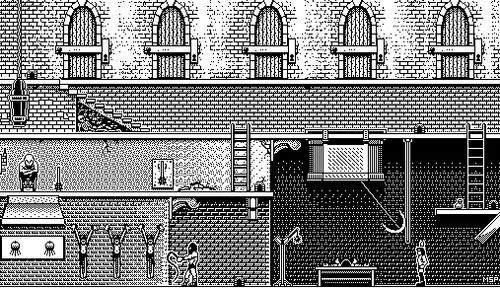 The Dungeon, you see, is where you end up if you miss a jump and fall through the cracks. It is your punishment. It is hell.

You enter by falling down the chute, which instantly chips away a portion of your health. You perform a short, quick jump onto the first pole, taking care to not get impaled upon that swinging hook (this is much trickier than it sounds). Shimmy up the pole, and knock out the first guard with a rock. Bear in mind, the guards don’t stay dead — they get back up after a brief pause, and if they’re facing you, they’ll fire their crossbow, which is a problem (please refer to the bullet points above). Run through the hall, and mind that lip on the floor — if you trip, the guard will probably wake up before you have time to knock it back out. Then, climb down the ladder into the room with the goon on the chair. Grab the morning star on the wall. Stand clear of the goon. Hit him three times to kill him. Flip the switch to turn off the swinging hook. Knock out the guard again, run back down the hall (mind the lip!), slide down the pole, grab the flail, and subdue the torturer before he can attack. Now, pay attention, because you have approximately no time at all to get this right: Jump over the unconscious torturer and grab the correct set of keys. You will know the correct set of keys because (a) the prisoners shake their heads at the wrong one and (b) the wrong one will drop a helpfully labeled one-ton weight on your head. You must do this and get back across the room before the torturer wakes up, because you are now without a weapon and cannot fight him again. From here, it’s a matter of getting up to the top of the room (around the guards, obviously), and opening any of the five doors, which will lead you to the wrong end of one of the other levels. Meaning you must now work through it backwards.

Did I mention the only way to save your game is to go to the Computer Room?

And yet, despite the unsavory things that exited my mouth as I played, nothing I could say here is more important than this: Beyond Dark Castle is marvelously fun. While there are indeed a million ways to screw things up, there are also bombs and helicopter backpacks and an occasionally benevolent wizard. There’s an infectious daffiness to this game, somewhere at the crossroads of Looney Tunes and Edward Gorey. The dangers are so diabolical you can’t help but embrace them, and the artwork is full of endearing little details (the head-shaking prisoners, for example, or the mutants sticking their tongues out at you). There’s also the sound design, which is the product of some exemplary human being making cartoony monster noises and injury reactions. It’s no wonder this game made me laugh as a kid. It made me laugh now, even as I wolfed down humble pie.

I did not finish the game, though I did get two orbs under my belt by bedtime. This is the sort of thing that requires dogged practice, and that's a luxury I can no longer afford. But I was glad for a reunion with the game that started it all for me. It's comforting to know it's still out there.