Pornokitsch
Reviews Books Comics Film Fiction Index
What should Becky play next?
The Gardens of Ladies - One Comic Gets Its Euphemism On 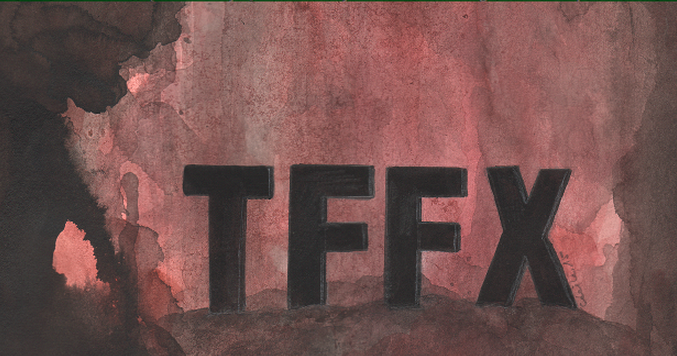 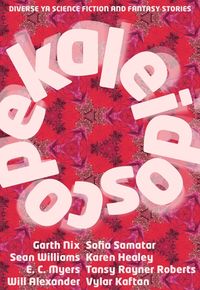 If we had to get rid of all but one of our tag-line themes, Feminist SF would probably be the one that we’d keep—in its intersectional incarnations (the only ones that are not bullshit*) feminism encompasses so many of the issues that we care about anyway. We first published an issue of Feminist SF in 2010, and it was a core element of the theme of Outlaw Bodies, and pretty much everything else we’ve done since.

There must be a million stories to choose from, including pretty much the entire bodies of work of Ursula K. Le Guin, James Tiptree Jr., Joanna Russ and Octavia Butler. I struggled a bit to single out any one story to fit this bill, but I’m plumping for one of the stories that may have excited me the most when I first read it last year in the fabulous Kaleidoscope anthology of diverse YA scifi and fantasy: the Locus award-winning "The Truth About Owls" by Amal El-Mohtar (since reprinted in Strange Horizons and even translated into Arabic).

This is a beautiful story about a teenage girl coming to grips with her own alienation, the culture of her Lebanese immigrant parents, and the destructive power inside that she struggles to control. Anisa is transformed by a visit to an owl sanctuary near Glasgow, befriending a Welsh owl and its keeper, and developing an obsession with the Mabinogion. Both a wonderful evocation of childhood and growth for a young woman, and a painfully honest depiction of coping with a divided family, through internal conflict and denial of culture. I suspect that many readers will already be familiar with this acclaimed story, but even if you are, go read it again!

*With thanks to Flavia Dzodan

We also published a Queer SF-themed issue in 2010, and are proud to have seen several TFF stories reprinted in the Heiresses of Russ annual lesbian speculative fiction anthology in the last few years. I was delighted when the Outer Alliance came along, primarily (and perhaps selfishly) because it created a community of open-minded people from or supportive of the whole Quiltbag spectrum.

In this climate, I’d probably find it harder to think of a completely cishet story that I loved than a hundred great queer stories, but the one that leaps to mind right now from recent reading is Tori Truslow's "Boat in Shadows, Crossing" from a couple years ago. A beautiful, dreamlike fairytale set in a nightmarishly inventive fantasy world of haunted wood and demon-possessed boats, set against the backdrop of a festival to a genderqueer god, every word of this story is poetry, every hellish image or beautiful vignette makes your skin quiver. An important story for the new places it takes the fantasy genre, as well as for the wonderful representation of the often-invisible queer and non-gender-binary characters, this piece was deservedly honoured with a BSFA shortlist place and reprinting in the Russ best-of. 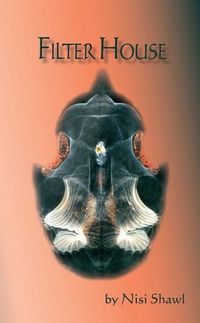 The theme of our acclaimed and much reprinted/honorably mentioned anthology We See a Different Frontier, imperialism, colonization or decolonization are rich themes in science fiction. The story that has always stuck in my mind as the most beautiful recent example of this theme is Nisi Shawl’s "Deep End" (available in Hopkinson/Mehan, So Long Been Dreaming and in Shawl’s collection Filter House, both of which are worth reading cover to cover).

Like most of the awesome stories I’m recommending today, "Deep End" ticks the boxes of more than one of these categories: it contains queer and prominent female characters as well as colonized bodies; it is partly set in a virtual world controlled by an all-powerful computer; it concerns medical and disability issues as well as colonization, an unequal legal system and patronizing social control. The imprisoned characters in Shawl’s story are being sent to colonize a new world, but they are themselves colonized: mostly people of color from the penal system back on Earth, scanned and uploaded to a computer for the long journey through interstellar space, where they will be downloaded again into new bodies, bodies that are spawned from the genetic stock of their white oppressors.

The story is gorgeously intersectional, however, as well as being a fiendishly clever use of technology to completely game-change the world along all of the axes of race, class, sex, orientation, ability, language. It has sparked a series of sequels, as well—a sure sign that there is more quality and potential than has any right residing in a single story!

We’ve published a few lovely Eco-SF stories in our time, including Melanie Rees’s "Ephemeral Love" and Don Norum’s "Neap Tide", and as a subgenre this has always been our first love; we’ll never tire of this kind of fiction. There are more great examples of the kind of science fiction that builds on ideas around our ecology and climate, of humanity’s propensity to fuck up the world or of the absolutely necessity to stop fucking it up, or even do something to start fixing it, in movements such as Mundane SF or the Shine Anthology.

A powerful example of this is Jetse De Vries’s short story "The World Coyote Made" in the Looking Landwards anthology: a story which has protagonists and antagonists, but no complete heroes or villains; a gripping adventure with a devilishly cunning solution; and an unmistakable environmental activist ethos that it wears unapologetically on its sleeve. To say much more would be to spoil one or more of the many lovely twists in this story, but you should track it down and read it. Really. 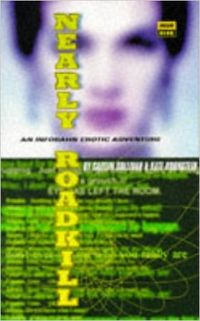 It may not be obvious any more, but The Future Fire was actually founded as a cyberpunk magazine, although that’s not really the way it evolved. Still, we have published some lovely stories in that vein, such as Mark Harding’s "Art Attack!", J.C. Hsyu’s "Safecracker, Safe" and Zoë Blade’s "Terminal City." In many ways cyberpunk is a retro genre, and so it’s perhaps not surprising that my pick of an awesome cyberpunk story is Nearly Roadkill: An Infobahn Erotic Adventure by Caitlin Sullivan and Kate Bornstein—a novel from 1996 but set in a world that feels like an alternative 1980s, full of text-only bulletin boards and technically incompetent FBI agents.

A story about identity, and sexuality, and privacy, it is both highly political and prescient—the two genderless hacker protagonists are able to be who they really are online (which is to say to be any, or all, or no genders; have any, or all, or no kinds of sex and love), but they also have to fight against an oppressive governmental programme that is legislating away the privacy and self-determination of cyberspace. A gripping and emotionally engaging adventure that crosses worlds (cyber and meat) as well as genders, generations and subcultures. Rightly a classic, if you haven’t read this yet, you’re in for a treat!

The Future Fire has been publishing stories like these for ten years now. If you’d like to help us to keep going for another decade, and to celebrate what we’ve seen so far, please consider supporting our fundraiser at igg.me/at/tffx, where you can pre-order an anniversary anthology and pick up other cool rewards.