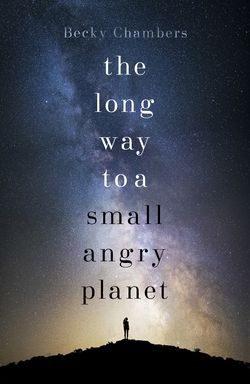 Hey, guess what's out today? Again? In a new way?

Becky Chambers' award-winning and absolutely sensational The Long Way to a Small, Angry Planet is now available in both ebook and glorious hardcover.

The story of The Long Way is pretty well-known at this point, but, in case you want to relive it, here's the Guardian on how this kickstarted debut novel became one of Hodder & Stoughton's summer blockbusters.

Here are how a few people have reacted to the book:

"It is a quietly profound, humane tour de force that tackles politics and gender issues with refreshing optimism." - Guardian

"Humane and alien, adventurous and thoughtful, vast in its imagination and wonderfully personal in the characters it builds. But above all else, it is joyously written and a joy to read." - Claire North

"A joyous, optimistic space opera. Although it isn’t shy about tackling Big Questions, Planet is a heart-warming debut novel that will restore your faith in science fiction (specifically) and humanity (in general)." - Tor.com (uh, me)

"Does The Long Way to a Small, Angry Planet really live up to the buzz? The answer is a resounding, and unconditional, YES!" - SFF World

"A refreshing, joyous book that skips neatly around convention, and – with the flick of a page – sucks you utterly into its world, so much so that you become reluctant to leave the Wayfarer and its crew" - Stark Holborn

"This is an impressive debut from an exciting author. If the series continues in this vein, we’re sure to have a new sci-fi classic on our hands." - We Love This Book

"Imagine smashing the groundbreaking, breathtaking science fiction of Ann Leckie’s Imperial Radch saga against the salty space opera of The Expanse; The Long Way to a Small, Angry Planet lacks the wall-to-wall action of that latter, and some of the former’s finesse, yes—nevertheless, Becky Chambers’ debut is a delight." - Tor.com (not me)

"What it is, rather, is a book about friendships, about chosen families and how they form, about being on someone else's side, about banding together while still being yourself. It's about people making a living in a hard universe, together. It's full of heart, and I loved it.... It was the most emotionally satisfying book I've read so far this year." - The Eyrie

"In a perfect world, all books would give me the warm fuzzies the way The Long Way To A Small, Long Planet did. It is a delightful novel, full of witty repartee, nice people being nice to each other and developing warm and important relationships be them romantic or not. I can’t wait to read more from Becky Chambers." - The Book Smugglers

And, in case you need some introduction to Becky's writing - you can find her blog here, her columns for us (yay) here, and, hell, here's a (very) short story. 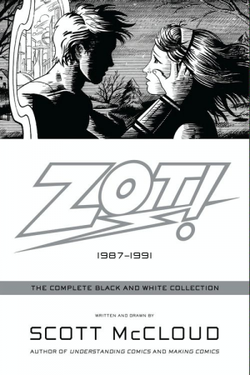 Zot fights surreal foes who are rarely menacing, except in their ability to provoke existential crises. The 'villains'  often embody abstract concepts, and rare do little more than rant and, er, make art. These portion of Zot! are oddly charming, although not spectacular - perhaps because, as a superhero epic, we're expecting more in the way of action. Or, at the very least, palpable tension.

The superhero stories pick up some assistance from the notes at the end of each arc. I'm generally not so fussed about this sort of whatnot, but McCloud is nothing if not a thoughtful creator. Especially as a reader that's not familiar with art and its history, having McCloud explain his influences and ambitions was surprisingly useful. Similarly, McCloud draws thoughtful connections between Zot! and its autobiographical inspirations as well - how his personal life changed his work (and possibly vice versa).

If Zot! stopped two-thirds of the way through, it would've been an educational read, and an enjoyable one. And that's about the end of it.

But... then there's the final third of the collection, the 'Earth Stories'. Which elevates Zot! to being one of the best comics ever created. 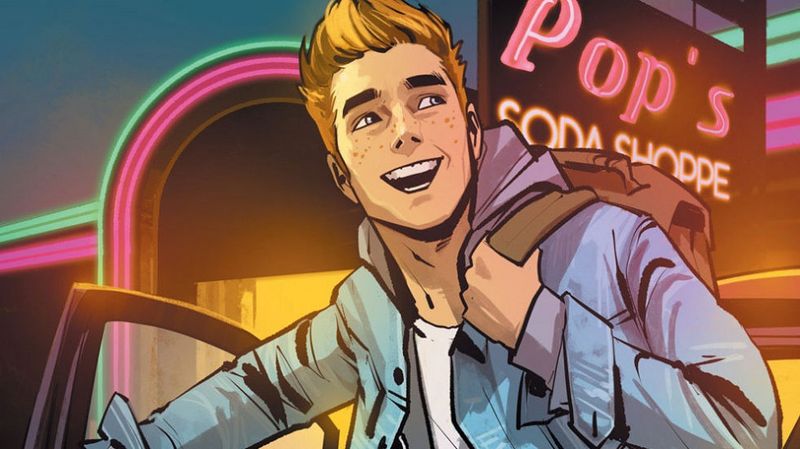 All-American icons don't get much more iconic than Archie, so the launch of a new Archie #1 felt like a suitable subject for the One Comic team's attention. Written by Mark Waid and with art by Fiona Staples, the creative credentials are impeccable. But how do you relaunch something as timeless and specific as Archie?

And on the subject of timeless - Jared looks at some eternal comicbook romances. Aw. 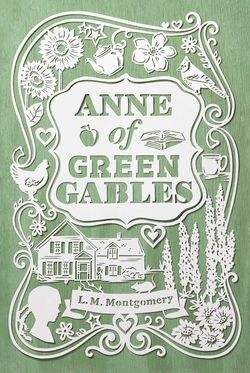 This week's Friday Five guest is Zen Cho, author of the Crawford Award-winning short story collection Spirits Abroad and editor of Cyberpunk: Malaysia. Her debut novel, Sorcerer to the Crown, is out soon from Ace (US) and Pan Macmillan (UK), and has already been receiving (well-deserved) rave reviews.

Zen's short story "The Four Generations of Chang E" is collected in The Apex Book of World SF 4, released at the end of August.

Zen's chosen the topic of "Five fictional girls and women that I will love forever" - please join in with your own favourites in the comments!

Matthew and Marilla Cuthbert of Prince Edward Island put in an order for an orphan boy to help them out on the farm, but they get a girl instead. Thus begins one of the most enduringly popular works of children's literature, featuring one of literature's best girls, the eponymous Anne.

It's hard to write a character who is meant to be universally charming and make her universally charming, but Montgomery somehow managed it. This comes not just from Anne's whimsy, but the fact that Anne is actually pretty good at life. She's orphaned at birth and exploited throughout her childhood, but she manages to hang onto optimism. She saves babies with ipecac and turns down scholarships so she can look after the people who took her in. I'd read another fourteen books about her. There's no one quite like Anne.

...and the moment we've all been waiting for. Let's pick the winner of my vote! After 12 blog posts, 10 book reviews and 6,000 pages of reading, I can now announce who won approximately 1/7,000th of a Gemmell Award!

Ok, granted, the voting closed on 17 July, but since the official winner won't be announced until Saturday, I have two days where my 1/7,000th can feel particularly meaningful. Plus, I've got a lot of rambling to do.

Continue reading "DGLA: And the winner is..." »

Secret Cinema's Star Wars: The Empire Strikes Back has been extended until 27 September 2015. Anne and I went last weekend, and it was the greatest, most fun, most joyously geeky outing we've had in a long time.

We laughed. We cried. We got frisked by Stormtroopers. It was awesome. Go.

You can pick up your tickets here.

This year I’m selecting twelve Pygmalion stories—or stories that contain echoes of the Pygmalion myth—and essaying on them. I already have a few in mind, but please feel free to suggest others in the comments or on Twitter @molly_the_tanz. 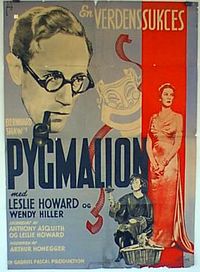 It’s Low Hanging Fruit month here at Pygmalia, hot on the heels of me totally flaking out of a July column, but don’t judge me too hard… I’d never seen Pymalion, and quite frankly I didn’t know it existed until April, as I was idly browsing the “English” section of my local video store. After noting the Criterion case, I rented it immediately. Um, by which I mean, I noted it starred Second Hottest Actor Of All Time Award-Winner Leslie Howard* as Professor Henry Higgins, I rented it immediately. What? I’m only human.

I grew up on musicals, and as I first saw My Fair Lady during the pre-Internet age, I think I can be forgiven for not going down the Google-hole to discover that the dialogue and the staging were taken from the 1938, Bernard Shaw-scripted black and white film, Pygmalion. To be fair, I did run out and buy myself a copy of the play at a used bookstore, the same one I still have, and read it several times—but as to finding out about the Leslie Howard and Wendy Hiller version, that took me until this year.

The Broken Eye by Brent Weeks 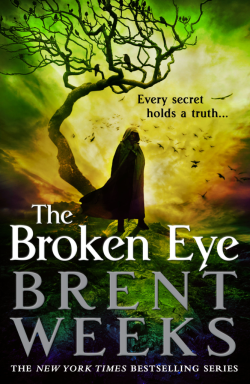 I'm reading and reviewing all ten finalists for the David Gemmell Legend Awards. You can follow along here. Voting has closed, but the awards aren't announced yet, so I'm plowing on...

The Broken Eye (2014) is the third in the four book Lightbringer series by Brent Weeks [read our previous reviews here!]. The books take place in a world where light is power, with 'drafters' as the wizards able to wield said power. The Chromeria - an alliance of powerful drafters - has been (more or less) running the world, stewarding over a (more or less peaceful) sort of aristocracy.

Although drafters are the top of the pecking order, there are checks and balances in place - largely involving noble families, the high church, a handful of military organisations and a seemingly-infinite number of secret conspiracies.

Arguably the greatest 'check' is the cost of drafting - as the wizards use their power, it begins to change them. The immediate effect is an emotional one: drafting 'blue', for example, makes you more logical, while 'red' makes you angry. But there are long-term physical changes as well, with drafters eventually becoming more and more colour-infused, and eventually turning into 'wights' - colour-monsters.

Prince of Fools by Mark Lawrence 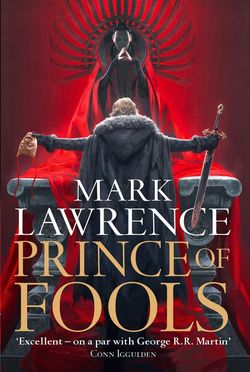 I'm reading and reviewing all ten finalists for the David Gemmell Legend Awards. You can follow along here. Voting has ended, but the prize isn't announced yet, so I'm forging on...

Prince of Fools (2014) is the start of a brand new series from Mark Lawrence. Lawrence's previous trilogy, The Broken Empire, picked up last year's DGLA with its concluding volume - Emperor of Thorns.1

Prince Jalan Kendeth is a noble and a jackass - and he would, I think, be the first to admit it. Born to privilege, but not responsibility, his primary concern in life is avoiding his creditors. And when Snorri Snagason - a captive Northerner - is hauled into court, Jalan thinks he's found a way. Snorri's a scary bastard, and, after pulling a string or two, he's Jalan's scary bastard - a pit-fighter that can get Jalan out of debt.

Except Snorri doesn't quite behave to plan. He escapes and, after an unfortunate magical incident, Jalan's dragged off with him. The two are linked together by a backfiring magical spell - one that's been kept from completion by Jalan and Snorri being in the wrong place at the wrong time.

Now they're two halves of an occult whole, a broken circuit. They can't bear to be together, but, magically linked, they can't stay apart. The heroic Snorri and the unscrupulous Jalan are off in search of a cure - a search that will take them through all the broken kingdoms of the land, and eventually, to a deep dark horror lurking in the frozen North.

This week's link o' the week - a piece from Alistair Smith on the role of subsidised culture:

The arts and culture contribute £7.7 billion to the UK economy – and quotes from some major employers inside the creative industries (and beyond) explaining just how much they rely on arts and culture as a training ground for their own businesses...

The economic case for supporting the arts and culture is a strong one, but pursued without restraint it creates a subsidised sector that simply mimics what the commercial sector could do perfectly well itself, without funding. The economic impact of the subsidised arts is a happy by-product of one of the UK’s most successful sectors, not an end in itself. We mustn’t allow the tail to wag the dog.