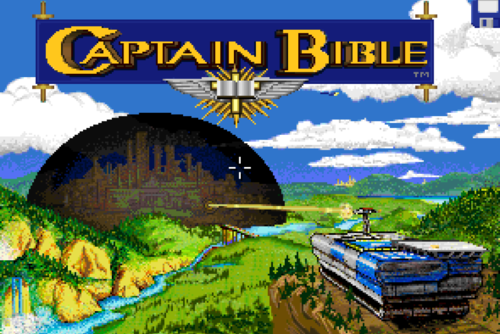 It wasn’t until I hit high school and began a lengthy tour of world religions (I got off at Agnostic Station) that I saw another side to Christianity, the side that desperately wanted to be fun. I tagged along with a few friends to various Protestant youth groups, and...Catholicism this was not. We’re talking electric guitars, church sleepovers, the whole nine yards. It was in this context that I learned Evangelical Christians have their own – let’s call it what it is – transformational fandom. Christian fiction. Christian cartoons. Christian video games. All intended to convince kids that religious education is every bit as cool, we swear as secular entertainment. In practice, most of it’s about as cool as a D.A.R.E. assembly, but after a childhood of itchy incense eyes, teenage!me appreciated the intent.

Captain Bible in the Dome of Darkness is a relic (a-ha, Catholic joke) of those efforts, as well as of the ‘90s edutainment whirlwind. This is not a game I played in my DOS days, so I went in fresh, ready for a hefty dose of cheese. Here’s the thing, though: Yes, it’s preachy. Yes, it gets weird. But honestly? It’s got a sweet side, too. I wanted to give this game a hug before politely refusing its pamphlets.

To the plot: The super high-tech Bible Corps – spaceships! transporters! shiny capes! – is dispatched to a city in the clutches of a Tower of Deception, which has trapped the innocents within under the eponymous dome. It’s up to our hero, Captain Bible, to get in there and save the day. His task (and, by proxy, mine) is to confront the cybers – nefarious robots that shield themselves in lies about the nature of the Almighty (roll with it). The good Captain can disable their defenses by countering with an appropriate Bible verse. This is followed by smashing robots with a sword, as God intended.

Now, I expect someone with the rank of "Captain" to have a modicum of competence, but this dude is a far cry from Steve Rogers. Our protagonist goes in armed solely with his "computer bible," which the Dome promptly wipes clean. This means Captain freaking Bible has to go around learning verses before he has any hope of fighting cybers. I’d expect this from, say, Catechism Cadet, but from the Captain himself? Sir, do you not know this stuff already? Did you memorize nothing in theology class? You had one job, man! One job!

Narrative conceits aside, this game is a surprisingly soothing point-and-click with a rather enjoyable soundtrack. The gameplay is simple: collect verses, deploy the right verse to counter the “cyber lie,” smash the robot, rinse, repeat. It gets repetitive fast, but you could say that about most educational games from ye olde mid-90s. That said, there are a few nuggets of game design goodness that I have to give a nod to. For starters, as a tool for teaching scripture, this thing actually works. When a cyber confronted me with "You don't need to help others, just mind your own business," I immediately thought oh, that’s Philippians 2:4. That's way better than I ever did in Sunday school. And as the point of the game is not fighting robots, there’s an option to automate combat, so that young’uns who can’t click a cyber’s weak spot fast enough won’t be prevented from progressing. If you’re making a game with a specific educational purpose, that’s a pretty good idea. Furthermore, an early game crash led me to discover that both the maps and verse locations are randomly generated, making this something you could play again and again and again (if you really wanted to). Health points are replaced by a faith meter (roll with it), which becomes depleted if a robot whales on you. But never fear! There’s no death! You’ll just be booted back to the nearest chapel, where God will restore your faith for free.

God, I should mention, is a vendor in this game. Aside from free faith points, you can pray for unlockables: the Sword of Spirit, the Shield of Faith, and improved maps. God’s not going to hook you up just 'cause, though. You want the Sword of Spirit? You better have collected the verse that mentions said Sword, or else your prayers are going to fall on deaf ears. Kind of an odd message for a game that makes a point of telling you that loving God wholeheartedly is its own reward, but then, my job here is not to debate theology. If it was, I’d point out that framing scientific observation as a pack of lies is highly subjective, since I have some Christian pals who would argue hard in favor of the coexistence of science and faith – but I digress. (Wait, nope, I'm digressing back: It wasn't even about evolution. It was about light refraction. Rainbows are apparently a big deal.)

Those inevitable moments of brow-beating doctrine were what pushed me away from an otherwise pleasant (if hokey) educational game. That, and when the human victims showed up. The robots were way more fun. The robots didn’t show up wearing literal sheep’s clothing. 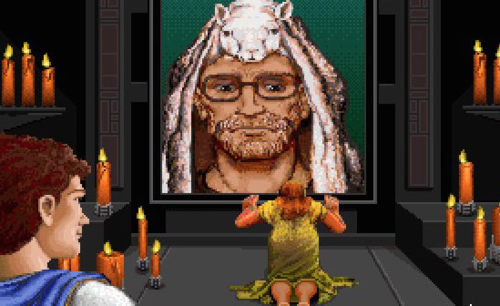 Oh, it gets worse. 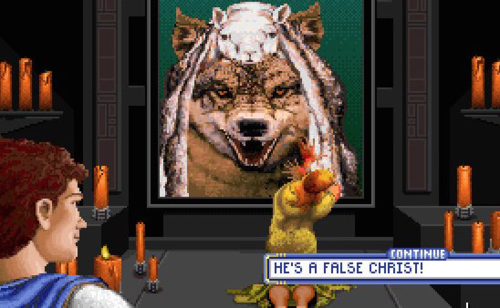 And that, blessedly (a-ha), is where my game crashed one last time. The false Christ of the future killed my play-through. I’m pretty sure my computer’s possessed now, which is a shame, because the graphics card is less than a year old. I wonder if someone who never got confirmed is still allowed to acquire holy water.