I’m being unfair. Had I played this game in the first grade (the age I would’ve been when this was released), I probably would’ve enjoyed it in much the same way that I did Oregon Trail. True, driving a shipping truck around Canadian highways isn’t quite as gripping as fording rivers and mourning dysentery victims, but it strikes a similar chord mechanics-wise. Crosscountry Canada is, loosely, an educational game, serving up a bit of geography drizzled with sincere patriotic sweetness. It’s a kids’ game from the dawn of the ‘90s. You have to embrace it for what it is.

I began with only the barest idea of what to do. I knew I was a truck driver. I knew I was in Quebec. I knew that I had to deliver four commodities to St. John’s, Newfoundland (the first of which was snowmobiles). I was told these things, then dropped into a map best described as minimalist. 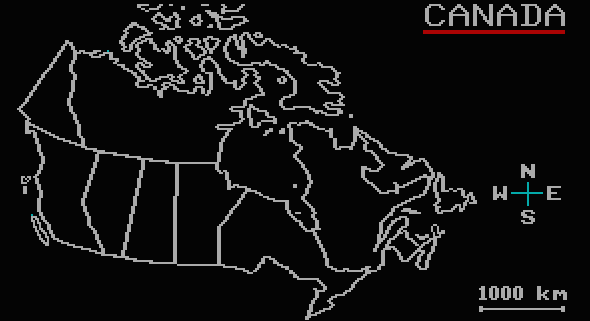 It was here that I discovered my first problem: I have no idea where anything in Canada is. I know where my friends live, ish. I know Anne of Green Gables happened on the east side of things. Realizing I had my work cut out for me, I opened a new browser window and asked the internet for a map of Newfoundland. Based on my new frame of reference, I thought it reasonable to take a route like so: 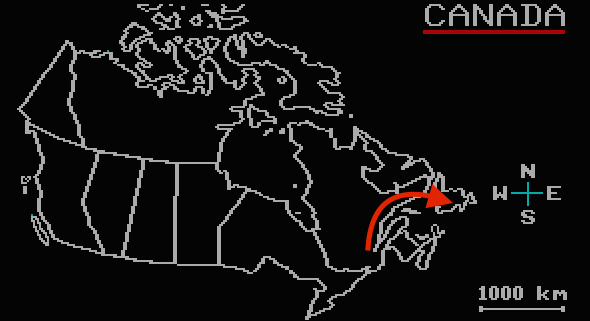 The game suggested no commands, but I was confident in my ability to improvise text input. 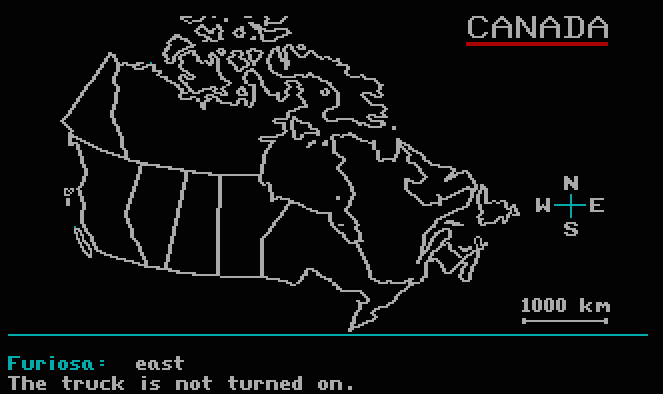 Already, I was off to a great start.

I'm assuming this game originally came with a manual or at least a readme, because nowhere in Crosscountry Canada does it give you a command list (not to mention directions beyond “deliver snowmobiles to St. John’s”). Commands such as “go northeast” were obvious, and when the game told me I was hungry, it was easy enough to determine that I was supposed to find a town and “eat.” But were it not for a helpful Internet Archive commenter who posted the complete command set (which I did not discover until later on), I wouldn’t have known the more esoteric offerings. “Down,” to get out of the truck, for example. “U” to get back in. “PM,” for “political map.” I hope to god there was a cheatsheet posted in Canadian computer labs circa 1991, or this meant for a lot of frustrated little truckers back in the day.

So. My journey to St. John’s. I’ll go ahead and spoil the ending: I drove a total of 16,828 kilometers trying to find my way there. I don’t know who designed the roads in this country, but as a foreigner, I consider them a declaration of war. The way to Newfoundland does not (as I discovered after looping around the Eastern provinces like a fly at a picnic) resemble my annotation above. It’s more like this: 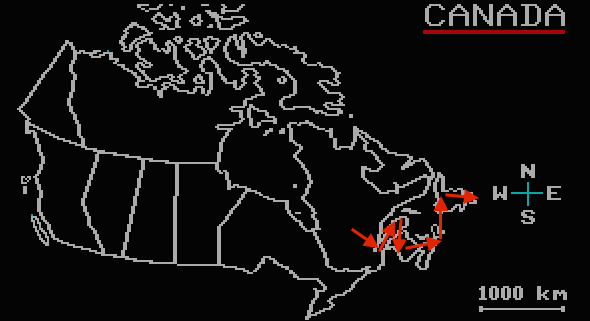 As I was following the logic that I needed to head in a northeasterly direction, this took a while to figure out. An interminable while.

I drove the endless roads, sometimes through the night. Dispatch told me to pick up some apples, if I could, but none of the cookie-cutter towns I passed through had any available. How empty my life was. How devoid of purpose. Why had I become a truck driver? Why had I not taken that curling scholarship and gone to college? I regretted everything that had led me to this moment. If only I had a companion to pass the days with. If only someone could provide me with a crumb of human comfort.

It was then, as my real-life leg started to fall asleep, that I saw the first living person I’d seen during my entire time on the road. 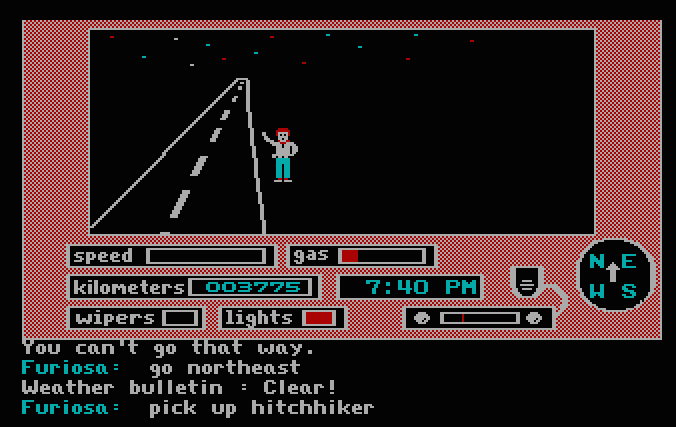 The game warned me that picking up hitchhikers could be very dangerous. I didn’t care. Danger was preferable to dying of ennui. “Yes!” I cried, slamming the Y key with enthusiasm. “Yes, climb aboard, my Canadian friend! Tell me of your life, your dreams, your desires! And, if you possibly can, tell me how the hell to get to Newfoundland!”

But my companion said nothing. There was no danger, no conversation. Just a polite goodbye once we reached Edmundston.

Once more, I was alone. Distracted by existential despair, I got in an accident. I hardly cared.

Through happenstance, I found myself on Prince Edward Island. My Wikipedia map told me this was at least in the neighborhood of Newfoundland, so given that ferries existed elsewhere in the game, it was my hope that I’d be able to hop up from there. But of course, that would’ve been too easy. 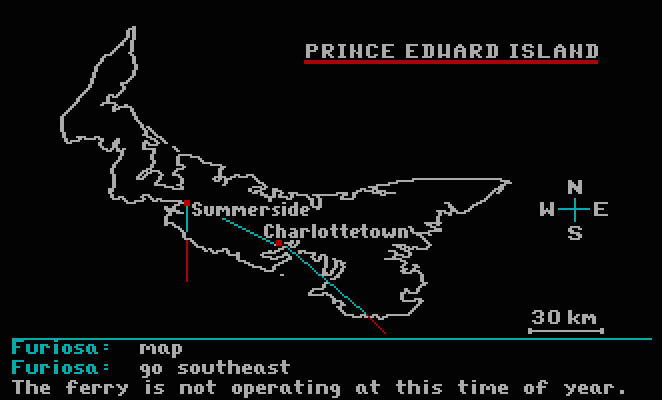 I returned to the mainland, my ire reaching a simmer. 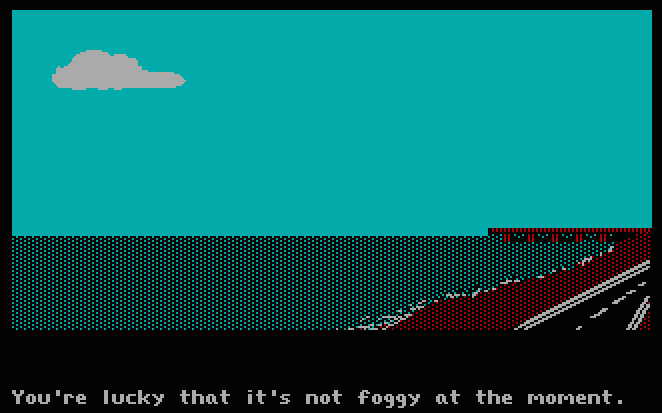 Make that a boil.

I glanced up from my corner of the couch, where I sat with my laptop perched across my knees. On the TV, my spouse was playing Dragon Age: Inquisition, a wonderful game. A fantastic game. I returned to my screen in an almighty sulk. I could’ve been lobbing fireballs and fighting monsters and smooching the grown-up equivalent of a Disney princess, but no. My sorry ass was driving in circles trying to find someone – anyone – who would sell me some fucking apples.

I still don’t know how I stumbled into Newfoundland, but it happened. Oh, glory be, it happened, and I didn’t care at all that I hadn’t found my optional cargo. I beelined for St. John’s, and...and nothing. Nothing occurred, because I had misunderstood the paltry instructions given at the start. I wasn’t supposed to bring snowmobiles to St. John’s and then continue with the shopping list. I was supposed to bring everything to St. John’s.

My eye lingered on a command I hadn’t yet tried: SPEED. The truck leapt forward, and for a moment, I was transcendent. I was living as we were meant to live, wild and reckless through tree-lined hills. No, it wasn’t safe, but I was beyond such worldly cares. If I were to die, then I’d die a free woman.

Highway patrol pulled me over, gave me a ticket, and sent me on my way. Spirit broken, I buckled my seatbelt and continued on. I stopped for a meal before leaving. 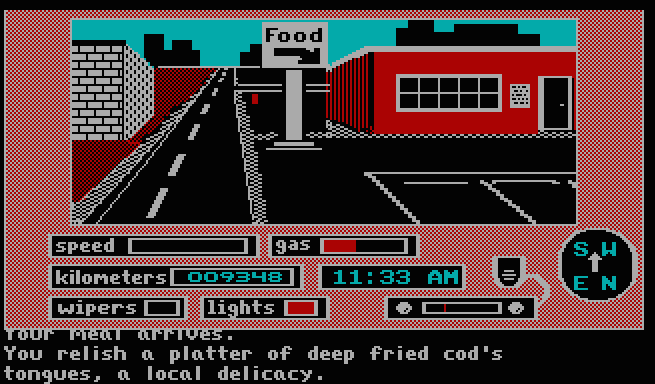 It's possible this game is an extended metaphor for purgatory.

At this point, quite by accident, I discovered the helpful list of commands was only the first part of that saintly commenter’s boon. They also included a breakdown of commodities and the towns they could be found in. At last, I found apples – and silver, lumber, and telephones, too, because my dispatcher was clearly taking advantage of the decriminalized weed. At last, I returned to St. John’s. I knew the way this time. I rolled in shamefacedly, awaiting a reprimand for the two and a half weeks it had taken me to complete a simple supply run. I was given a share in an oil well instead. I don’t understand capitalism at all.