Friday Five: 5 Comics About the Magic of Everyday Life

This week's Friday Five features five comics books that talk about magic. And life. And where the two intersect. Or don't.

This is absolutely a capital-G-Great comic, with stunning art and an exceptional high concept premise: perpetually reincarnated divine avatars, reappearing (briefly and wonderfully) every generation to inspire the mundane. The whole thing, see, is a metaphor for art, y'know - with the gods as creators, living their (literal) fifteen minutes of fame and bringing magic to the masses. And, in WicDiv (as the tumbleyoot say), that's hammered home in pretty much every conceivable way: the gods are artists, and use their holy platform to make everything from dance videos to long-form Medium-esque rants. 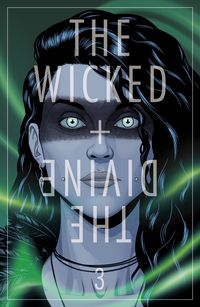 As noted, this is Great. The sole flaw to Volume 1 is that it is almost solely about the high concept; Volume 2, 'Fandemonium', brings in more of a narrative - and conflict - to keep it moving. That said, Fandemonium is also - as you might tell from the title - somehow even more heavily invested in the metaphor.

Creators, you see, are like gods. Did you get that yet? But, curiously, there's a very specific sort of creation going on here: the gods are all seemingly UK-based and devoted only to alternative culture. In fact, the high point of their media calendar is a convention that seems entirely based on the MCM Expo (a cute nod). Which could lead the discerning reader to believe that maybe the gods in question aren't pop stars and DJs, but actually an analogue for comic book creators? Who would've thunk it.

And this adds another, curious, level to the mix - intentional or not. Swapping a long, but human, life for a brief burst of divine celebrity status is a Faustian trade at any level. But getting to be Taylor Swift or One Direction - superstars already prompting millions of fans into the throes of ecstasy - is one thing... getting to be, well, a comic book creator - that's another. Judging purely on Instagram followers and Page 6 mentions.

In Volume 1, our divine beings feel more globally celestial. In Volume 2, they're operating on a more parochial level. As far as the metaphor is concerned, this allows the comic to comment, insightfully, on the fandom that surrounds it - the comics world of tumblsquee, insider bickering and the ExCel centre. But as far as the plot goes, having a cosmic reincarnation cycle that gives us Mark Millar, not John Lennon - that lessens the stakes. It is a tricky balance. But given the strength of the WicDiv concept, I think the series erred in the right direction: 'write what you know' intelligently, rather than trying to capture the already surreal reality of the mega-stars. 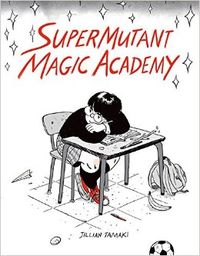 I keep thinking I've reviewed this, but I haven't - I've just been waxing lyrical about it in the comments on other sites. Weird. Huh.

Anyway, SuperMutant takes a bit of getting used to - it is a collection of webcomics, so there's not a lot here in the way of central narrative. Instead, it is a series of vignettes, often quite surreal, all taking place in a high school in a high fantasy/science fiction/mash-up kind of world. It is genuinely lovely, and has a touch of the Calvin & Hobbes about it, with the combination of light-hearted philosophical musing and deeply personable characters.

There are moments specifically about the conventions of genre, but mostly, this is about kids (some with monster heads) trying get along and find their place in the social world. Extremely clever (even the smallest throwaway line or bit character is significant), very funny, and very, very sweet - it doesn't matter how magical/super/mutant you are, your problems are still the same. 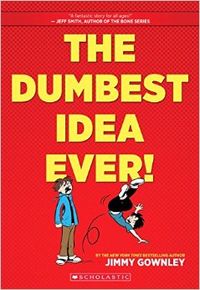 An autobiographical comic about Gownley's own childhood and the (universal) struggles of adolescence. There's something deliberately everyman (boy?) about young Jimmy, who, like many of us, went from a 'perfect' pre-teen to, well, falling off a cliff. The grades, the sports, the friends, the security... all disappear with the first thrashings of quasi-adulthood.

In Jimmy's case, there's no magic here. He gets some lucky breaks thanks to understanding friends, a loving family and a preternaturally understanding girlfriend. If anything, The Dumbest Idea Ever! is successful because, even with all that stacked in his favour, Jimmy still screws up. He's a kid, after all - no more equipped to handle success than he is failure. I can see this book being oddly controversial, as Gownley eschews the conventional metrics of success - grades, sports, peer approval - and tells the reader that a) failure is inevitable and b) suck it up, and just be who you are.

Books about 'growing up geek' seem to fall into two categories. The Dumbest Idea Ever! falls into the first - alongside titles like Zot! - showing that, harshly, there's nothing special or magical about geekdom. You're just a person with a thing; maybe that's a marketable skill, maybe that's just a temporary escape. But it is a thing like any other thing (sports, sex, drugs, knitting, whatever). The other category - see comics like Americus and books like Among Others - take a slightly more self-aggrandising position: the 'literature of the imagination' opening a unique portal that no other outlet can provide. There's certainly value to both positions. Although I find the former stance a little less self-important, the latter can still provide much-needed reassurance that we're part of something bigger than ourselves. 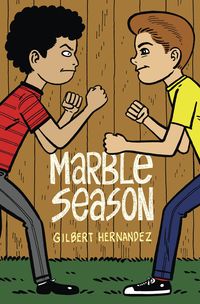 A less overtly autobiographical entry, Marble Season is still clearly inspired by Hernandez's own childhood. Probably best described as Peanuts with teeth, Marble Season is about the insular world of neighbourhood children: their politics and their play, the comings and goings, their secret currencies and languages. The adults are, like Peanuts, notable only for their absence. The children's lives take place in the liminal spaces between structured activity - walking to and from school, playing before and after dinner, the unsupervised spaces between the 'real world'.

Although a snapshot of a single period in time, the use of a whole cast of characters helps present the 'ascent of man', from screaming baby to imaginative pre-adolescent to struggling teen to near-adult. With each step, we see - sadly - the magic fade, as the children are drawn from an existence wholly magical into one that's more and more dominated by the pressures of the real world. The art is simple, but passionate, conveying emotion with every line. 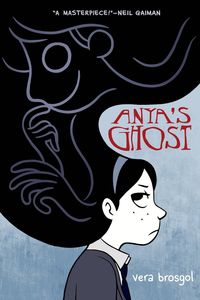 Another one where a magical intrusion into everyday life comes with costs. Anya is lonely. She struggles with her immigrant heritage, and her family's failure to 'adapt'. She doesn't fit in at school and life, well... it kinds of sucks.

Much to her surprise, Anya finds sympathy - and friendship - in the undead. While walking in the park, Anya falls down a hole, and makes the acquaintance of a ghost. Emily's been trapped down there for decades, and, when Anya makes her escape, she takes Emily with her. The two bond. They're both lonely (and misunderstood) (and put-upon). With Emily's assistance, Anya starts to find a certain freedom and, more importantly, self-confidence.

Unfortunately, 'good vibes' aren't all that Emily brings with her, and, by the end of the book, Anya is discovering, and battling against, her friend's darker side. A bit like The Wicked + The Divine, the metaphor isn't unsubtle. Emily is an excellently creepy manifestation of the sacrifices that Anya is making to adapt. A bit like Victorian, or even Reagan-era, horror, Emily-the-ghost is a floating, gloating representation of Emily's sins. Some small conveniences are ok, but, when it comes down to it, the evil demands too much. Again, unsubtle - but excellently done, and Brosgel seamlessly bridges the gap between coming of age story and ghastly thriller.

Friday Five: 5 Comics About the Magic of Everyday Life

This week's Friday Five features five comics books that talk about magic. And life. And where the two intersect. Or don't.