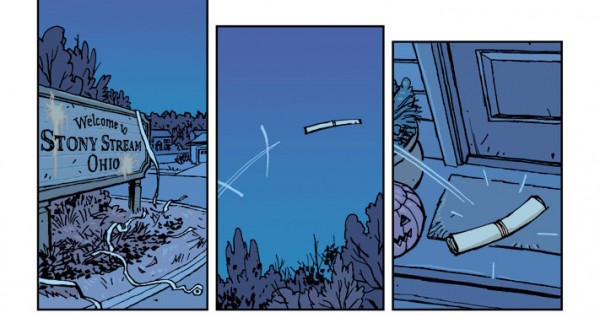 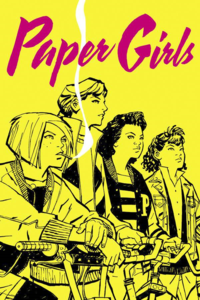 Suburban weirdness at its finest (and weirdest).

Paper Girls is the story of (you may have guessed it) a group of newspaper delivery girls in small town 1988 USA who get caught up in strange goings on involving mysterious hooded figures, an unidentifiable device hidden in a cellar, run-ins with the neighbourhood gang, and in one case, weird dreams involving monsters and the death of a sibling.

Kicking off the first issue with that dream sequence gives the opening of the story a very different flavour than the rest, which is depicted in muted pre-dawn shades and realistic style. In fact, though Vaughan's story and the characters of (most of) the paper girls are instantly interesting and engaging, it's Chiang's art that's the real star here. It's expressive and distinctive, making the suburban streets feel somehow wide open and slightly sinister at teh same time, and the various characters quite different than any others in the market at the moment. There's been a lot of talk of Paper Girls in "Stand By Me meets..." terms, and while I can see it, I suspect based on this first issue that there.a a lot more interesting stuff to come than that glib knock-off description suggests. 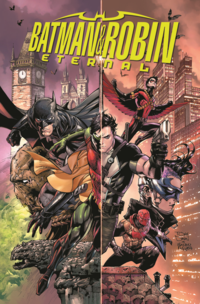 Arriving hot on the heels of the previous Batman weekly series, Batman Eternal, this one promises to be far more about the 'and Robin' than the 'Batman' part, because right now that Batman is gone. Bruce Wayne has had his memory of being Batman removed, and the Jim Gordon Robo-Bat is roaming Gotham. Which is bad news for Dick Grayson and the other holders of the Robin name, because something from Dick and Bruce's past is back to wreck havoc and attempt to kill them.

Already famous in some circles as the series that will introduce former Batgirl Cassandra Cain into the New 52, the series wastes no time in getting right into the action, throwing all the former sidekicks together and even lobbing in a cracking scene between the Robo-Bat and sidekick wannabe Harper Row before getting into the meat of the action. This first issue is oversized, and packs a lot of action in to make good use of the extra space, leading to a truly impressive and properly shocking cliffhanger. There's also an unexpected sense of the Bat-family as an actual family here, with all the slightly dysfunctional siblings dealing with the loss of 'dad' in their own way.

It's no secret that the DC Universe has been leaving me pretty cold for a long time now, for reasons that I won't dwell on here, but having recently committed to getting caught up on Snyder's Batman from the start, it's seriously drawn me in to that part of the DCU at least, and Batman and Robin Eternal 1 does a great job of expanding my interest. 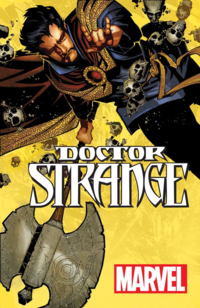 The last time we saw Doctor Strange he was being vapourised by Doctor Doom in the Secret Wars crossover. Obviously somewhere along the way he got better.

Over the decades there have been some truly brilliant takes on Doctor Strange but based on this first outing Aaron and Bachalo have a shot at joining the best of them. Aaron's Strange is a very grounded version, which makes sense given his very worldly background (recapped nicely in the opening sequence), able to get a mystical incantation wrong in the panic of combat even as he's flirting with an otherworldly soul eater. He's a more-than-slightly-arrogant figure and it looks like his over-confidence might be his undoing as he's warned that he hasn't been properly passing the price for the magic he's been using.

Once again here a great story is rendered outstanding by the art. Very few mainstream artists do batshit crazy quite like Bachalo and here he certainly doesn't disappoint. Inked mostly by longtime collaborator Tim Townsend, and handling his own colouring, the line between the Doctor's domestic environment and the other-dimensional lunacy has never been so fine. With Bachalo even a scene of someone standing in the street outside a door always contains the potential for something bizarre to come bursting into the frame and few comics benefit from that tension more or better than Doctor Strange.

This one's also got a short back-up drawn by the legendary Kevin Nowlan that connects to the looming threat from the main story, which rounds out an already great debut issue very nicely indeed. 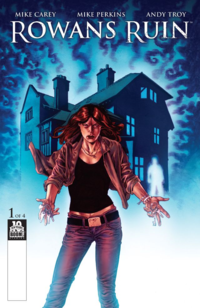 Ah, creepiness in rural England - that's a kind of horror that doesn't get done in comics often enough. The Hammer tradition is alive and well here though: the house with the dark history, the unsuspecting outsider staying there, the flickering lights and sudden blackouts (that even knock out the battery powered laptop), the half-glimpsed shapes outside the window, it's all here and it's all good.

Carey's credentials in the supernatural are well established by this point, and Mike Perkins brings some of the same style that gave his Ruse such an atmospheric look. The story is set up with a catastrophic event as visitor Katie runs for her life from the house, overlaid with her frantic call to the emergency operator. As we hit the climax of that scene we cut to 'Six months earlier' and begin to explore her journey from her US home to the house called Rowan's Rise near Stratford.

This first issue is very much Katie's story, showing her exploration of her new surroundings, the beginning of her digging into the mystery of the house, establishing a new friendship, and sharing her childhood experience of 'sensitivity' to her surroundings, all of which do a good job of keeping the story moving while building then releasing tension towards the finale. If there's a minor complaint to make it's that the final panel cliffhanger is at odds with the subtlety of the rising tension that's gone before, but minor is all that is.

Overall, this wasn't just a big week for new titles, it was actually a good one. The first issues of the New Spider-Man and Iron Man series, as well as Jughead #1 and Axcend #1 all came close to my cut too. The thing I'm particularly interested to see is whether Marvel can keep this up across the fifty-plus other new titles they have coming up, or if they've deliberately led their new wave with stronger offerings.

NOTE: Edited to fix an incorrect credit on Paper Girls.