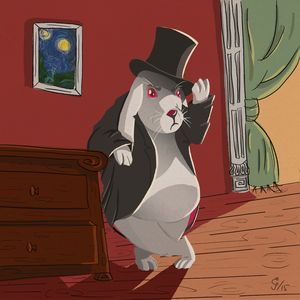 The silence that had engulfed the hotel last night had been banished by the clattering of cutlery and crockery in the breakfast room. Every table was occupied by masses of humanity, shapeless in their familiarity: Middle-aged couples; groups of old ladies; everyone modestly clothed in pastel and white fabrics.

That’s why she stood out to Michael, her floral print dress shining in the light that graced the bay window table. She sat opposite the only spare seat, lost in reverie. He touched the back of the empty chair and mouthed words, which his throat withheld in a very English silence. She nodded without looking at him, so he fetched toast and juice from the breakfast bar then returned to join her.

They ate in silence, staring across Seven Sisters Road into Finsbury Park. The sunlight echoed in the mist, burning that which made it beautiful.

Pictures of a magician adorned every wall. Press pictures and headshots hung next to endless handshakes with celebrities of yesteryear. The one over the jugs of fruit juice showed a skinny, bald man lifting Tommy Cooper’s fez from his head, manic smile matching manic smile. In such company the girl looked lost.

Michael sneaked glances at her and established she was young, her features hedging between plain and pretty. A modest bob eschewed glamour. Her floral dress was out of style. But her expression caught his eye; she seemed at peace with her place out of place.

He had meant to leave, get on his way to the British Library to boon obscure tomes with his attention, but instead he found himself saying, ‘It’s strange to see the park like this. Beautiful.’

‘Not really,’ she replied. ‘Things always look best at dawn.’

Michael knew dawn as the harbinger of exhaustion and distrusted it intimately. So it surprised him to hear a voice much like his say, ‘I love sunrises.’

‘It smells different out there. Mornings are cleaner. You can’t believe what people say at night,’ she said, glancing at him afterwards, as if she’d said too much.

‘Are you visiting friends in the city?’

‘My dad,’ she replied. ‘He’s in the Dick Whittington.’

‘I’m sorry to hear that, is he ok?’ She didn’t reply for so long he started talking again: ‘Strange story that. Whittington was real, you know? I’m doing a PhD on historical figures and folklore. Whittington, Robin Hood, people like that. Whittington used his cat as venture capital, made a fortune.’ She stared at him blankly so he added, ‘Not bad for a kid with a pet.’

Her vacancy developed to suspicion. She tapped her glass and said, ‘We weren’t allowed cats, they chased the rabbit.’

He was lost for a reply, so he said, ‘Do you know who the magician is? I don’t recognise him.’

But she was already leaving, shaking her head at the question. She stood quickly and scurried between the tables with quick small steps, leaving Michael alone with his confusion.

Mephisto the Unruly was grateful the audience had allowed him to perform from bed. He realised it was unconventional, but he wasn’t the Unruly for nothing. They loved him the day he let the doves loose in the theatre. They screamed with relief as the boy whose leg he amputated turned out to be the assistant mopping up all the blood. They would forgive him a supine illusion.

His favourite trick was making rich peoples’ watches disappear and not returning them. He never tired of watching the cascades of realisation turn into anger then flare into embarrassed impotence as the weight of the audience watching beat them into silence. Rich people always made him laugh, the way they would rather be seen to be part of the joke than reclaim thousands of pounds worth of jewellery. Sometimes he wondered what the poor people did with the watches. But the magic, of course, relied on not knowing.

From his sick bed Mephisto raised his arms. He waved his wand as briskly as he could. The bunny nodded its approval, the curtains twitched in anticipation, and the audience were as still as masonry, bound together by expectation.

This would be his greatest trick, the reason he had come out of retirement. Running a hotel was no game for a magician. He subsisted on the joys of ignorance, not the gratitude of amenities.

The girl in the flower dress held her elbow in one hand and waved the finger of the other hand at the hotel manager as Michael came into reception. ‘You’re booked up every night.’

‘But you’re happy for me to change rooms? What if the other guests find it too noisy as well?’

‘None of your concern, ma’am. Think of it as a trade secret,’ he added with a wink.

‘Funny,’ she said, to herself as much as the manager, ‘my dad used to say the same thing.’

The manager said, ‘Our guests are the most important thing at Hotel Mephisto.’

‘Mephisto!’ Michael cried out, startling both of them. ‘The magician, he’s Mephisto the Unruly!’

‘I thought he disappeared,’ said Michael. The girl said nothing.

The manager shook his head as Michael said, ‘He did though, 19 years ago. Apparently he lost his fortune, gambling they said—‘

‘Come now,’ chided the manager, ‘let’s not succumb to gossip.’

Michael joined the girl at the counter and said, ‘That’s all there is though - gossip. One night in Krakow, mid-tour, he vanishes. Poof. Abracadabra! There were rumours he found something. Something really magic.’

But Michael wouldn’t be dissuaded: ‘Can I meet him?’

‘Mephisto!’ said Michael. ‘The owner of the hotel.’

‘I’m afraid the owner is currently indisposed.’ The manager nodded tightly, removed his bell from the counter and disappeared into his office.

Michael turned to the girl, sputtering with excitement: ‘He’s a legend, and he’s still alive? I have to talk to him. Can you believe it?’

The girl looked ashen, her face revealing the wraith of the old woman who would possess her. She mumbled something indistinct before making her way round the counter in pursuit of the manager.

Michael said, ‘You can’t go back there,’ but he didn’t follow her.

He was sure he felt better, now that the shivering had stopped. This fever he was supposed to have was nonsense: how could you have a temperature yet feel so cold all the time? In fact, sitting up in bed for the first time in days, he was increasingly sure it was a trick. An old rival must have hypnotised him. Robinson, probably. That sly bastard was always jealous.

No matter though, this trick would never be solved. He could feel it in his bones, he knew because the rabbit had waited so patiently. The sun was setting, the muted colours behind his curtains hiding the day bleeding out. The dragons blackened in the gloom as the rabbit stole the red from the twilight. A decorous mantle for its final show.

He coughed once, twice, then mustered a third. He sensed the amusement of his audience more than heard it. The rabbit loped over slowly, top hat in its mouth, and presented it to Mephisto.

The magician stroked the rabbit’s ears with fondness, looked into its eyes and said, ‘We had a good run, didn’t we.’ The rabbit, ever the professional, didn’t move a muscle. The magician turned to his audience, stacked so regularly, all fixed in place, filling every inch of space he could see between floor and ceiling.

He waved his wand over the brim of the top hat, then Mephisto said the magic word.

Michael woke up, sore and shivering with cold. His pyjamas were damp and the wind cut through the scant protection they offered. He looked around, sifting the physical sensations from the lingering confusions of dream.

Even so it took him some time to realise it was night and he was lying on concrete, punctuated only by the most belligerent of grasses. His suitcase sat open on the floor near him, just as he had left it. Everything, in fact, was as he had left it - except for the hotel.

He pulled on his shoes and grabbed clothes from the case before zipping it closed. He was in an empty lot between two houses, the truncated buildings revealing wooden supports and tattered ends of brickwork. It was night, and the moon was high in the sky.

He thought he was alone until he caught a glimpse of flowers from behind a low broken fragment of wall. He dragged his case over there noisily to find the girl kneeling down, her frame shaking gently.

She was kneeling over a man. His tattered clothes, the waft of rancid air, all of these told Michael he was homeless. There was something familiar about him still. He asked her, ‘Is that him?’ only now starting to wonder when the vagrant would blink.

She shook her head and closed the dead man’s eyes, then disappeared into the night.

George functions as editorial omni-gel at Unsung Stories, an independent publishing company in London publishing science fiction, fantasy and horror. His short stories have appeared in Jupiter SF, SQ Mag, Perihelion and FictionontheWeb.co.uk. He can be found on Twitter @GeorgeSandison, and blogs sporadically at www.georgesandison.com.
Art by E.G. Cosh.