Tonight, their task is especially gruesome, a mission of repression with only a tenuous hold on not just the laws of the land, but the laws of decency. Protected under the cloud of anonymity, they move towards her and her friends, no longer upholding oaths they had taken, but creating new ones. Their march was a protest to her march; steps moving away from justice and equality, trampling on freedom, and practically parading ever forward to a world where expression can be denied by Kevlar armor and chemical violence.

She sees all this, as she has countless times before. She is no stranger to the blast of hoses or the blows from truncheons. She has felt her body lose control as gases coursed through her lungs or rubber bullets connected with nerve clusters. She has bruises and scars to mirror the medals she knew these men received for their bravery, and she wears them no less proudly. The flash and the fire and the pain has been a part of her world as long as she could remember. 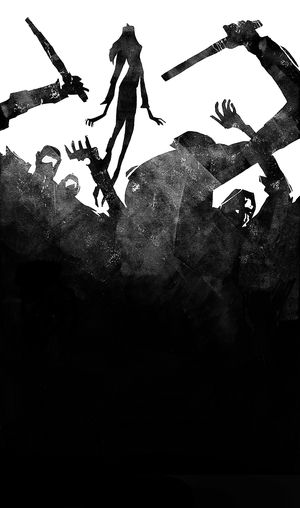 She is no saint, of course – she never pretended to be. If anything, that would have defeated her purpose. Because whenever she spoke, wherever she gathered, she only did so to have conversations with other people. For her to be set apart – to be either vilified or, worse, deified – was her greatest fear. More so, even, than these armored automatons gathering momentum as they pushed closer.

She is just a person. And yet she edges closer, too.

She didn’t begin at the front, but she makes her way to the vanguard of the protestors, sliding through gaps that formed just for her. They seem to not give way to her, but practically pull her forward.

In a moment, she is apart from them, from everyone. She is alone at the front. But, a connection still lingers, somehow, and the pulse reverberates through their shared breaths and linked heartbeats.

It is an act without choreography, a ballet without a symphony. There is no music. There is only the shuddering breaths of the nervous, the distant sirens, the hard rubber soles pounding a beat into the pavement. The sound is discordant – it lacks poetry. Bullhorn squeaks and protest chants and barking dogs are not the soundtrack, and if she hears these things at all, it is only because she knows them to be vaguely important. No, she sways and spins anyway—sometimes towards the police, sometimes back towards the protestors, but always dancing.

It wasn't as if she had done this before. And it isn't as if she is a gifted dancer. She doesn’t possess the lithe grace of a storybook ballerina. She wasn't trained in any kind of style. She is, in a single word, average – except that she is, in another word, extraordinary. Her dance is that of a person who doesn't dance for others, but instead moves only to please themselves.

It's a freeing dance to watch.

It builds in her, and if she leaps or twirls, she doesn't seem to know or care. It's only the sense of rightness, of place and time and movement being conjoined that guides her, closer and closer to the ranks of grim and determined men.

She finds her toes barely skim the ground now, and launches herself into a spin, arms upraised, back arched, and only one leg trying to make contact with the road. It is almost too much for her, and a groan ripples through the protesters when it seems as if she might fall. Tonight, though, isn't about falling. It's about rising, and even as gravity looks to drag her down, she pushes out of the spin, gliding towards the cops like a figure skater over ice. The groan grows into a cheer, and they surge with her, still inextricably tied to her.

Both sides press closer yet again, and the inevitability of her dance turning gruesome seems foregone. She is but a moment away — she can almost see past the gas masks and into their eyes—and not far behind her is a group eager to shed the term peaceful and rage against a system that wants to steal their voice. The guardsmen’s instincts hold them back, or maybe it’s simply their desire to see her move against an unyielding grain. They hesitate, they wait…

And she is beyond them, slipping amongst the armor, and new links reach out from her, connecting now with the faceless ranks of men.

For even as the two forces collide, she weaves between the silent men, spinning and darting, always out of reach, always a step beyond a swinging club or thrust-out shield. It's almost a game — almost — cavorting around the somber maypoles, those around her explode into curses and blood. It is chaos, as anarchy meets despotism, and in the middle of it all is her: a woman who slides through the cracks in the violence.

Each bond strengthens as her pace increases, the frantic energy of her dance spins out a web that ties her to each man and woman in this writhing riot. The colors blur, stretched out as the two groups ebb and flow around her, attach and disperse with effortless step. Her movements take her away from the soldiers, and back amongst the protesters, and then back amongst the armored men once more. Back and forth she goes, always weaving, always including. She doesn’t think of it as them-and-us anymore. It’s all us.

It’s all one turn around dance floor. And with it, the things that separated them—the things that tried to hide what they all shared – start to fall away.

There is pain mingling with the joy she feels. She’s not immune to it, even though she avoids the worst. No, she still leaves blood in her wake, but most comes from her feet as they search for a toehold, gripping into the street as if to find the earth underneath. Her breath is ragged – and exertion plays its role – yet it’s more because she’s sharing as much of herself as she can.

She reaches out, and another connection is made.

From above – far, far above – secret eyes take everything in. Not just clear pictures, but also abstract bursts as the grouped bodies give off heat and light. Of the spot of darkness where a teen has fallen, forever snuffed out. And something else. Something the men watching in some remote location can’t seem to pin down, no matter which image they choose.

A series of lines, crisscrossing the mass below, seemingly woven into the fabric of the fighting.

It is her dance. And as her speed increases, as she nears her climax… the fighting seems to contract inward – swinging fists become tight grappling – and then it explodes.

Bodies fly out, two at a time, thrown by a force that derives from a young woman – the young woman – twirling and spinning where moments ago anger reigned. She was alone, a single being who only knew that this was right. That this made sense. She was alone and dancing and the fighting had stopped and…

A hand grabs her shoulder. She shudders to a stop.

This is wrong. She isn’t finished. She can feel inside of her the fear and hope and rage and shame from each person she touched, and knows this can’t be all there is. That those things – those connections she made – can be something greater.

Mostly, though, she wants to dance.

She struggles against the hand, but it is strong, and she finds it amazing that something is stronger than her at this moment, that something is able to stop the dance. Her connections buzz, and it seems as if their hesitation will also be their undoing. She worries they will be lost, that the mesh her dance created would at any moment disintegrate. She has reason to worry. Because the hand is still on her shoulder, and now the other one is raising.

She does not flinch. And even as the dance – the connections, the power, the whatever – burns inside her, she doesn’t try to stop the soldier either. She just watches, the flames around her echoing off his mask, and his hand is getting higher…

And pulls off the mask.

She stares. The soldier is not an old man, but he’s not young like her, either. He’s not handsome in any particular way, and the lines from where the mask pressed against his face don’t do him favors. She knows, though, that it isn’t how he looks that matters. If anything, that’s the one thing she knows – it’s why they seem to have these same confrontations time and again.

She knows his appearance is just that: how he appears. It has nothing to do with the sharp tug she feels on the line that connects her to him, and she wonders if perhaps they’ve all been wearing masks…

That’s for another time, though. His hand has left her shoulder, and is now held out in front of him, palm up.

She bites her lip, the need to finish what she started warring with the fact that she has no idea what to do anymore.

She takes his hand. And for one brief eternity, they dance.

David Pomerico (@PomericoD) isn't really a writer, but happily rides the coattails of some great science fiction and fantasy authors as an editor. He lives in Brooklyn, NY.