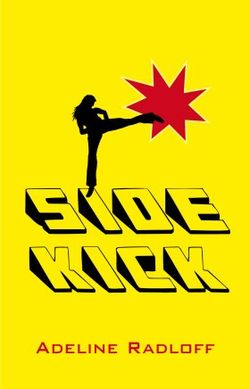 On its simplest level, Sidekick is a perfectly decent Robin-focused superhero tell-all. Katie's got her typical YA-book YA problems (as opposed to YA-life YA problems; Katie's issues are basically that she's super-attractive, she has a mutual frisson with a billionaire and she's a uniquely special snowflake with magical powers), but she's not annoying - she walks a tightrope between snarky self-awareness and charming obliviousness, without (too frequently) wobbling on either side. Her major conflict is, unsurprisingly, internal: does she go through life as a sidekick? Or can she be herself, and shape her own destiny?

As a superhero book, I'm not sure Sidekick is particularly outstanding. This may be a naive reading, but there's a barely-restrained enthusiasm to the book, in which Sidekick desperately wants to infodump, but manages to keep the impulse in check. Even with that thin leash of self-restraint, there's a lot of complexity: Finn's powers have all sorts of rules and regulations, there's the mysterious dead not-Alfred, there are new hooks and checks and twists and balances with every chapter. It is all internally consistent, but it is also... distractingly dense. Katie's voice - which is snarky but cute - is the real strength, and the breathless world-building is merely the sideshow. There's a certain argument that Sidekick doesn't even need it: the existence of superpowers only really exists to make Katie and Finn both 'born special'. But does that actually add to the book? Or does it give Katie's choices an air of predestination? I'm not sure.

Sidekick is also, be warned, slow - at least, initially. We get a lot of tip-toeing around Katie's life, essentially seeing all the mundane aspects of her world before we ever break the ice into the superhumanity of it all. But when things get moving, they move very, very quickly, and the last quarter of the book is an action-packed rush that's less 'cinematic' than 'cathartic'.

All in all, a mixed review. It is, on the whole, a book in which I find it easy to point out flaws - but it is also a book that kept me engaged from start to finish. Even when I was conscious that this was 'slow' or 'seriously over-explain-y', I still kept to it. Fundamentally, I liked Katie, and having a compelling protagonist with an entertaining voice is, well - already a success. More than that, beneath the superheroic gloss, this is actually a really solid YA coming of age novel with a strong message about being, or becoming, yourself.

I'm also not sure that there are many - (any?) - great superhero books. Lavie Tidhar, while talking about the genre, remarked that there's 'never been the Watchmen of superhero books'. Which is think is a valid point. Too often superhero books are still skimming the surface of superheroism, trying to describe a style of fantasy-action that is generally better portrayed (or understood) in comic books. Thinking about the books that 'do' superheroes well (or, at the very least, better), they fall into two camps. The first is the unintentional - something else as superheroes - something like Brandon Sanderson's Stormlight Archive or Mistborn books, or Mark Charan Newton's City of Ruin where we are, effectively, talking about superheroes, but couched as a different genre, in the vocabulary of epic fantasy. And the second is the elliptical - superheroes as something else - like Tidhar's own The Violent Century, in which the superheroes are entirely secondary to the historical forces that they represent.

Which means, of course, the big center of the genre - superheroes as superheroes - is pretty well-absent populated mostly by quasi-revisionist works like Sidekick and Grossman's Soon I Shall Be Invincible and such. And I'm not sure any of them can really compete with their comic book equivalents. To discuss. (Comments ASSEMBLE!) 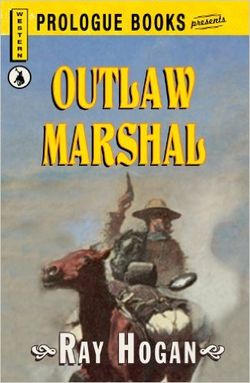 Ray Hogan's Outlaw Marshal (1959) is another book brought back to (digital) print by Prologue, who really don't pay me or know I exist, but I'm going to continue flogging their enjoyable work anyway. Ethics in pulp journalism! Like Sidekick (a YA novel masquerading as superhero SF), Outlaw Marshal is perhaps best viewed from a genre tangent: noir, not a Western.

Fundamentally, the two genres are different. To steal something from the great Stark Holborn, Westerns are largely about borders and open spaces. Noir, on the other hand, is about being trapped: in places, scenarios, passions, plots and other entanglements. There's actually some thematic overlap, at least, in some cases. If you Venn diagrammed 'agoraphobia' and 'claustrophobia', you'd fined some shared symptoms. But, in the case of Outlaw Marshal, we're almost entirely in the realm of noir.

The plot, for example, is immediately familiar to crime readers: an innocent man is wrongly accused. Clay Santell is a cowboy fleeing a bad romance and in search of a better life. Meanwhile, Harry Decket, a small-time lawman pretending to be a Marshal, is escorting Travers, a captured murderer. When Travers escapes outside the border town of Sutterville, Decket panics. Spotting Santell - also a stranger in town, Travers convinces the Sutterville folk that Santell is Travers. As long Santell dies 'evading capture', no one will ever know, and Travers will still get credit for killing a dangerous criminal. Meanwhile, from Santell's point of view, this small town is filled with crazy. All he wanted was a hot meal and a cold drink, but now he's being chased by a posse.

From there, well, we all know the drill. Despite the size of the West, Decket remains one step behind Santell. Santell is run ragged, and his exhaustion is palpable. If Outlaw Marshal lacks the tension of most pursuit-related noir, it isn't for lack of trying. Ray Hogan runs his protagonist through one set-piece after another, from sandstorms to ambushes. Santell is also faced with certain moral dilemmas, and unselfishly adds to his own problems by trying to clean up the messes made by his pursuit. When the posse threatens an innocent woman or raids a small town, Santell invariably circles back to clean things up, often at his own risk. This clear delineation of 'white hat' and 'black hat' might be what makes Outlaw Marshal not pure noir. Although the 'marshal' is the bad guy and the 'criminal' is the hero, there are still very defined moral roles. 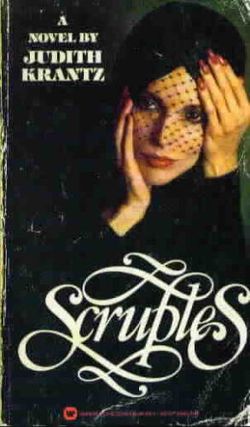 Scruples is pretty terrific in its own right. Interestingly, I found Billy the least interesting of the three stories, but I'm, generally speaking, a sucker for both thinly concealed excuses for explicit sex and 'business drama' backgrounds. This is a fast, fun read, with characters that are far more likeable and enjoyable than they have any right to be.

However, given this article's theme of NOT THE GENRE YOU EXPECT, let's pretend Scruples is something else: an epic fantasy. Here we have Billy, born into a noble bloodline, but one that's fallen on hard times. She struggles with all the weight and expectations of her upbringing, but also the genteel poverty. At home, she's the butt of jokes and the 'useless' one. But a wise old woman sends her to a far-off land (er, France), where she discovers her true calling. There's a tough ol' training montage (in this case, dieting), and at the end of which, Billy emerges - ready to seek her destiny and find glory.

Blah blah blah, and she goes on to achieve impossible things in the face of great, tyrannical evil. Her friends - a charming rogue and an eccentric dual-class wizard/fashionista - have their own subplots, but are largely there to help her fulfil her destiny and restore the balance of good [dress sense] to the world.

Obviously Scruples isn't winning the Gemmell Award any time soon (for one, it was written by a woman - zing!), but structurally, we're reading the same story. This is truly the Chosen One of False Equivalences, but the correlation isn't entirely spurious, as both Scruples and your generic-epic-fantasy are based on escapism. And the formula for commercially successful escapism is well-established - for Scruples, it winds up with Billy discovering her inner hotness, reinventing modern fashion and becoming Queen of Society. For Sword of the Dark Radiant Castle, it is about Wee Zigfried discovering his inner magic, slaying orcs, and becoming High King. For bonus points, the protagonists start unloved, in the wrong family, overlooked and unappreciated. This not only creates empathy with the an escape-seeking reader, but makes their inevitable triumph all the more delicious.