The first volume, The Serpent, takes place in 17th century Venice, where a young woman named Thene discovers, at the risk of sounding wanky, 'her true self'. Treated all her life as a pawn, the Gameshouse allows her the freedom to control not only her own life, but also the lives of those around her. Pretty seductive.

The second book, The Thief, skips forward to 1930, where another player - a more experienced one named Remy - has foolishly engaged in a round of Hide and Seek. Of course, with Gameshouse rules, this involves running around Thailand, frantically deploying 'pieces' (people!) in the desperate hope of staying alive long enough to become the Hunter...

The third, The Master, is set in the present day, and is the most abstract - but also the most powerful - of all. As two people compete for the control of the Gameshouse itself, we learn how Thene and Remy's games fit in to a single, greater game. Coupled with tantilising fragments of the Gameshouse's own history, and the stories of the behind behind it.

There's a real danger of spoiling the stories, and I don't want to do that, because the three games are immensely fun. Think Iain Banks' The Player of Games, but set in various periods of our own history, and told with the drily comic, deadpan humour of KJ Parker. But that's selling the book short - the theme, which slowly, steadily, sneakily and irrevocably comes to life - is that we're more than the games we play. The costs of victory are discussed, as well as the role for humanity: to play, and win, a game, do we give up something of ourselves, and our connections to others?

The ending to the three books is, I suspect, controversial, but it is also absolutely perfect. I'm not sure how this will work with awards consideration, but the Gameshouse, as a whole, is one of the best books of the year - a subtle masterpiece that deserves to sweep all the chips from the table. 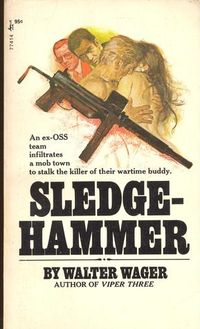 Walter Wager's Sledgehammer (1971) is a fantasy of a different sort. A group of men - part of a covert ops team in WWII - reunite to smash crime in a small town and to avenge a fallen comrade. It is a fun premise, filled with heists and hijinks, but it is perhaps more significant for its tone than its story. Sledgehammer has the same sense of isolation and claustrophia that can be found in the best 'small town' noir, for example Hammett's Glass Key or Horace McCoy's No Pockets in a Shroud.

However, unlike its noir predecessors, this is a novel that's about neither resignation nor redemption, instead it is a lengthy ode to frustration. Our heroes, such as they are, fight dirty and without compunctions. The premise to the book, which is stated repeatedly, is that our own cities have become war zones - and to take it back, we need to treat them as hostile territory. It takes a certain degree of wilful alienation to turn your own community into war-zone, and to behave with the ruthless detachment required to 'invade' one's own country. One of the book's few executional strengths is how honest it is in admitting that its protagonists are sociopaths.

It is hard not to associate Sledgehammer with the greater narrative of genre fiction - and a certain Vietnam-era cultural exhaustion. From crime to Westerns to romance to fantasy, this was an era of increased 'grittiness', as the simple four-colour heroic narratives were becoming increasingly divorced from reality. And yet, at the same time, there's a nostalgic plea to Sledgehammer: men, incapable of dealing with the world as it is, taking their cues from an earlier, more morally dichotomous time. Sure, their tactics are ruthless, but Sledgehammer is careful to only reference the guerrilla activity of WWII partisans, and not, say, the ongoing, asymmetrical warfare of Vietnam. The book similarly plays at escapism with willing (younger) women, gun-porn, wild luxuries and macho heroics. All of which do little to disguise Sledgehammer's underlying bleakness: an expression of a generation that's disappointed to the point of self-destruction. 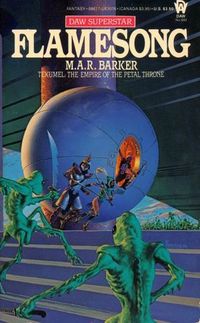 M.A.R. Barker's Flamesong (1985) is the second of the author's Tékumel books. The first, The Man of Gold, was a fascinatingly good-bad book, and merited a much longer review. Flamesong is, by the terms proposed in that previous review, a much better book, but in an awkward halfway zone that keeps it from being altogether good. Flamesong has a great 'hook' of a set-up: an ambitious young captain captures ;a devious noble from the other side of the war. There's a bit of chaos, and all of the sudden these two enemies - plus a host of support characters, all with their own particular issues and motivations - get chucked into a magical tube that shoots them all over the world.

Everyone becomes (awkward) allies in the face of new dangers: lost worlds, monstrous alien creatures, natural disasters, forbidden magic... but, importantly, their old rivalries are not forgotten, and Flamesong is as much about trust and treachery as it is dungeon-crawling. This makes for a nice shtick for a book, although Flamesong is so episodic that it occasionally feels more like a TV drama. But the world-building that dominated The Man of Gold is delivered far more naturally and more casually, giving the characters a chance to come through. There's even a bit of agency - unlike the persistent railroading of the first book, the characters all make their own decisions and suffer the consequences appropriately.

That said, it still ain't great fiction. The structure is goofy, the characters aren't entirely relatable, and I'm not completely wild about either the revelation (obvious, but silly) or resolution (straight up goofy). It is a better story than The Man of Gold, but still mostly serves as a showcase for the Tékumel world, rather than a novel in its own right. And even that it doesn't do as well as the first book.

One interesting philosophical twist - the characters in this are completely new, with only a passing reference to one of the villains of The Man of Gold to establish continuity. Perhaps more than anything else, this helps demonstrate the opportunity of playing in Tékumel, if not necessarily reading much more of it.