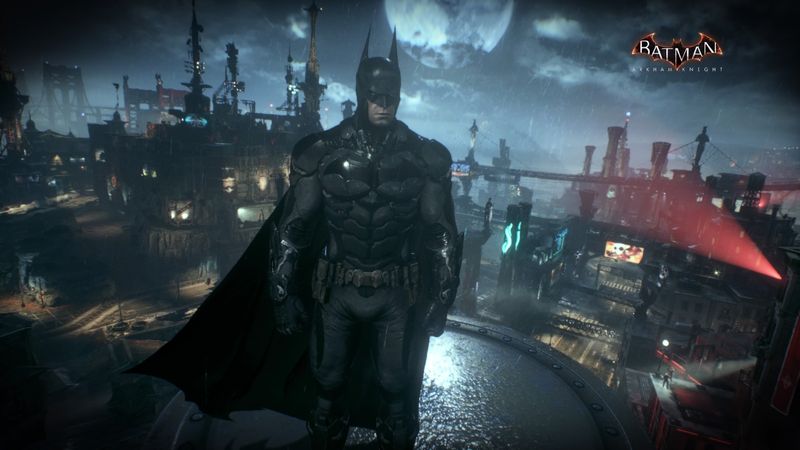 With the new generation of consoles finally coming into their own this year, it's been a great 12 months for blockbuster games. Here's the five which gave me the most fun - and in return, I've given them good write-ups. It's actually about ethics in end-of-the-year listicles.

What’s your favourite flavour of Batman? Tim Burton’s quirky crusader? The gritty noir of the comics? The brutalism of Nolan’s movies? You can find aspects of them all in the excellent ‘Arkham’ trilogy of games, which came to a close this year with Arkham Knight.

The game sees Batman teetering on the edge of madness and pursued by a mysterious new villain – the Knight of the title. The gameplay involves lots of swooping from shadow to shadow, lots of perching on gargoyles, and lots of punching the living daylights out of gangs of henchmen. A roster of villains – Man-Bat, Riddler, Penguin, Two-Face and many more – provide some extra challenges, but it’s the meaty main story that’s worth your time. Batman may spend most of his time dealing with the masterplan put in motion by the Arkham Knight and his ally the Scarecrow (voiced brilliantly by John Noble), but his old pal the Joker (Mark Hamill, of course) is forever at his shoulder. And yes, the Joker may have died in the last game, and yes, your first act in this game may be to cremate his body, but nevertheless he’s still busily tormenting his beloved Bats – and it’s this aspect of the story that’s by far the most successful. As Batman succumbs to his madness, he sees the Joker all around. Distant billboards show his grinning face – until you move closer and see that it’s just a picture of a nurse or a model or a movie star. And at every step of Batman’s hunt for the Arkham Knight, the illusory Joker is with him, snarking from the sidelines, dragging his nemesis further down into insanity.

The story twists its threads together tighter and tighter as it goes along, and all the while, you’re experiencing it through gameplay built on solid stealth and combat mechanics. True, the game could treat its female characters a bit better and some may find the Batmobile gameplay a little tedious (I didn’t, but your Batmileage may vary), but the Batman/Joker tension at the heart of this well-told story will make it all worthwhile. 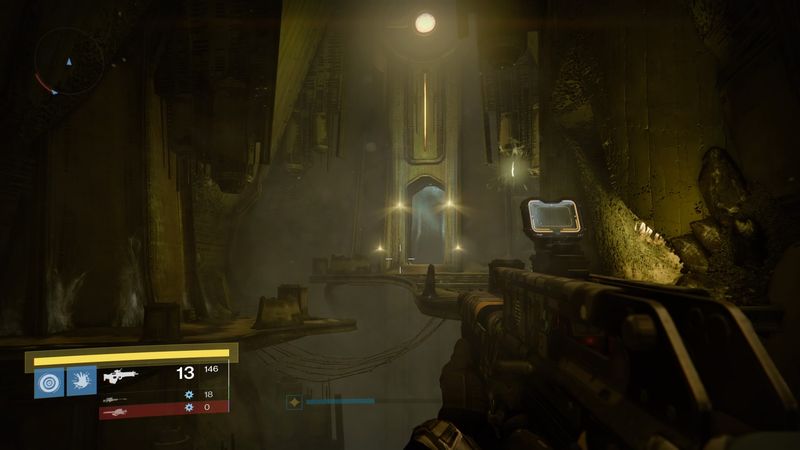 This odd hybrid of first-person sci-fi shooter and ‘massively multiplayer online’ game had a bumpy first year. People expected greatness from developer Bungie – the people behind the beloved Halo series of games – but Destiny’s initial release was met with a chorus of ‘meh’.  It wasn’t a bad game, but it was hampered by a damp squib of a main storyline and a shallowness of content. The latter was an especially big problem: Destiny was designed as a game to be lived in, a game to return to time and time again. If there wasn’t enough to do, enough material to keep people occupied, then it could hardly be considered a success on its own terms. Two small expansions helped patch things up, but it wasn’t until this year’s grand new phase of content, released effectively as its own game, that Destiny finally hit its stride.

The Taken King gets everything right: the storytelling is leaps and bounds ahead of the original, and there is so much to do and so much to explore – particularly aboard the Dreadnaught, an unholy blend of the Death Star, a gothic cathedral and a wasps’ nest which hovers in a hole smashed into the rings of Saturn. This megaship oozes evil; it’s creepy, huge and unlike anything I’ve seen in a game before. Exploring its cramped corridors and vast, echoey vaults has been one of my greatest gaming thrills this year. Bungie have a stated 10-year plan for Destiny, and if any of that includes anything half as good as the Dreadnaught, I can’t wait to see where they take the game next. 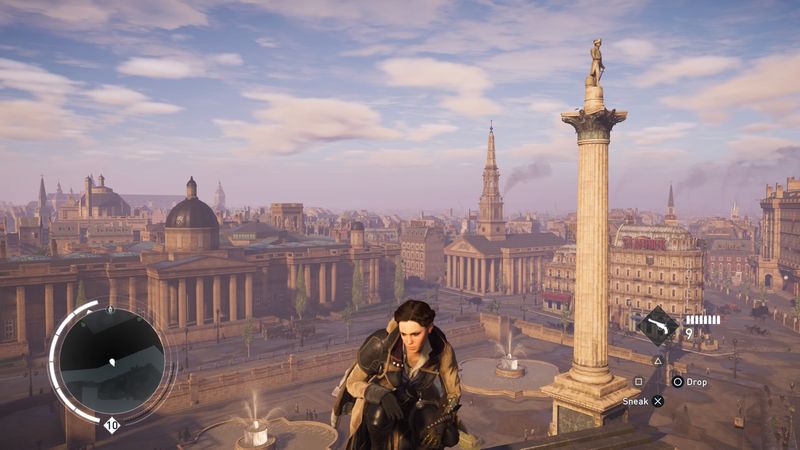 Ubisoft – the publisher behind Assassin’s Creed – comes in for a lot of stick. They churn out a new game in this series every year, and they never really change the formula: each one sees you visiting an iconic location at an equally iconic moment in history, clambering up buildings, ticking off a list of objectives marked on the in-game map. There’s an overarching ancient-alien-civilisation/Templars-vs-Assassins/meta-gaming-as-a-time-travel-metaphor/clever-clever thing going on throughout the series... God knows, Assassin’s Creed’s big picture is boring beyond words.

If you come back year after year, and play through the same basic game on a different map each time, then yes, you’re going to get sick of it. But dip in and out, and maybe you’ll have more fun. A couple of years ago, Assassin’s Creed: Black Flag slapped a piratical skin over the usual formula, and I had a whale of a time yo-ho-hoing my way across the Caribbean. (It had actual shanties.) But this year, Syndicate became the first Assassin’s Creed game that I properly loved.

You play as Evie and Jacob Frye, twins who work their way up through the underworld of Victorian London to rule over the city’s gangs. Truncated and fudged its geography may be, but this is London. From Southwark to the City to Buckingham Palace, you will pass a thousand familiar landmarks – and there is no greater thrill than climbing to the roof of a building, gazing out and saying, "I’ve worked there, and I’ve worked there. That’s where I go shopping. Right, time to have tea with Charles Darwin and then break into the Bank of England!". I suspect its charms may be wasted on those less familiar with London – but stuff ‘em. Those charms aren’t lost on me, and spending an hour or two skipping across the rooftops of this city, draped as it is in delicious Victorian verisimilitude, leaves me with a huge grin on my face. Extra marks for the great character of Evie; marks deducted for ruining the lovely ‘real’ ending with a near-future coda that advances the nonsensical ‘big picture’ storyline.

Will I be back for Assassin’s Creed next year? Probably not. But that’s no judgment on the fun I’ve had in the Fryes’ London.

Hoth, Tatooine, the forest moon of Endor. AT-AT walkers. X-wings. Thermal detonators. Darth Vader, Luke and Leia, Boba Fett. All these things. All these things and more. Speederbikes. Stormtroopers. Scout troopers. Snow troopers. The sounds, the sights, the thrills of every big battle from the Star Wars movies. Rarely has a licensed game so perfectly nailed its source material. If you want to know what it might be like to be a Stormtrooper or a Rebel solider – and if you don’t want to know that, then what is wrong with you? – then look no further. Pew pew and indeed pew. 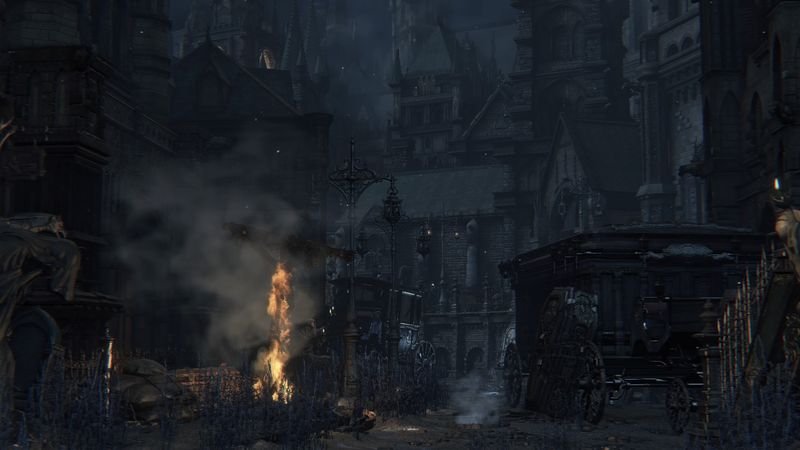 My favourite game this year. In fact, the more I think about it, the more I think it’s my favourite game ever. You’re a Pornokitsch reader, so I think it could be your favourite game, too - but there’s a couple of caveats. First of all, the game is exclusive to the PlayStation 4. And secondly, you kind of have to be good with games - or, in the lingo of the fans of From Software (the developers of Bloodborne and the similar Dark Souls and Demon’s Souls games), you have to "git gud". In a world full of games like Assassin’s Creed, with their mini-map checklists of challenges to complete and boxes to tick, Bloodborne comes as something of a shock. It throws you in at the deep end (almost your first act in the game is to allow your character’s death; this is actually necessary to proceed, and will only be the first of a billion deaths on your journey) and demands that you start swimming like Michael Phelps.

At the start, it feels as if you’re never going to get anywhere, and you’ll wonder why you even bothered trying – but eventually, you start to get a feel for the game’s intrinsic fairness. Yes, if you mistime your strikes or don’t dodge out of the way quick enough, some monsters will kill you in one or two hits – but when it all comes together, you’ll rip your enemies into tiny, bloody shreds. And just as you start to git gud, and your character’s power starts to grow, the game itself, its setting and story, absolutely blossoms. Never have I felt more rewarded by my progress in a game, not just in terms of greater strength or new tricks for my character to pull off, but more importantly in the slow unpicking of the increasingly bizarre story.

Like I said, if you like Pornokitsch, chances are you’ll like this game – but to avoid spoiling things, I can’t really tell you why. The aesthetic is certainly a big part of its appeal. There is no game as twisted, black and shadowy, so perfectly gothic. The cobbles of Yharnham – the town where you start out – are slicked with something, and the streets are lined with coffins chained shut and hearses abandoned in a hurry. The few sane residents you meet have sensibly locked themselves inside their homes. The others – misshapen and crazed – wander the streets in torch-wielding mobs, burning strange beasts on massive bonfires. As the game continues, and as you murder your way further into the mystery, the camera zooms out and out and out – and what had seemed to be a horror story about a creepy town under siege by werewolves turns out to be oh my God so much more.

By the end of the game, everything’s changed, and to this day, I am still trying to piece together the clues and figure out exactly what happened. The story is so beautifully arcane, the setting so complex and rich, that I have spent hours away from the console just thinking about it all. It’s a masterpiece of game and narrative design. You start Bloodborne wondering how you’ll ever fight your way to the end of the street; you end Bloodborne staring down the cosmos itself.

With the new generation of consoles finally coming into their own this year, it's been a great 12 months for blockbuster games. Here's the five which gave me the most fun - and in return, I've given them good write-ups. It's actually about ethics in end-of-the-year listicles.