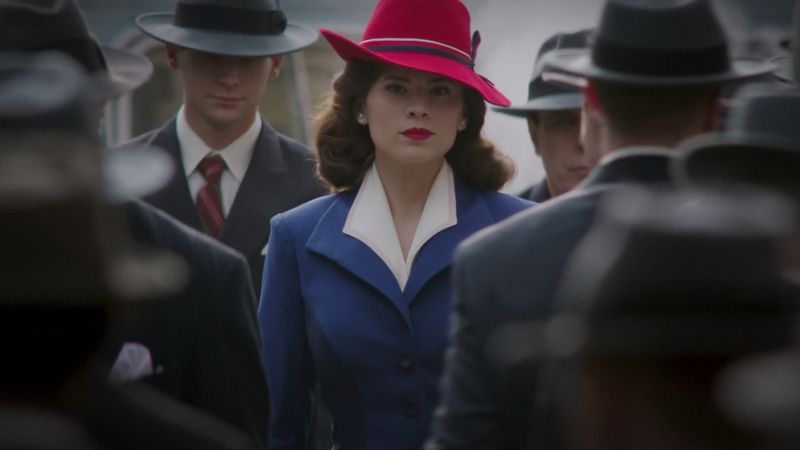 While strictly both a TV and film character, it’s on TV that Peggy gets to star, and to do some serious arse-kicking. Agent Carter season one wasn’t quite perfect, though it was pretty damn close, but I’d defy anyone to find fault with Peggy herself or Hayley Atwell’s performance. Though some of the gender politics was a little heavy handed, Atwell and Peggy rose above it to deliver a character unlike any other. I’d have to go back to Emma Peel to even get close.

Whether bolstering Angie’s spirits, throwing Dottie out of a window, or casually outsmarting every one of the men who think she’s “just a woman”, Agent Carter is always the strongest, smartest and just most interesting character on screen. When she says “I know my worth”, it’s neither defensive nor aggressive; it’s just a statement of absolute confidence. I cheered. 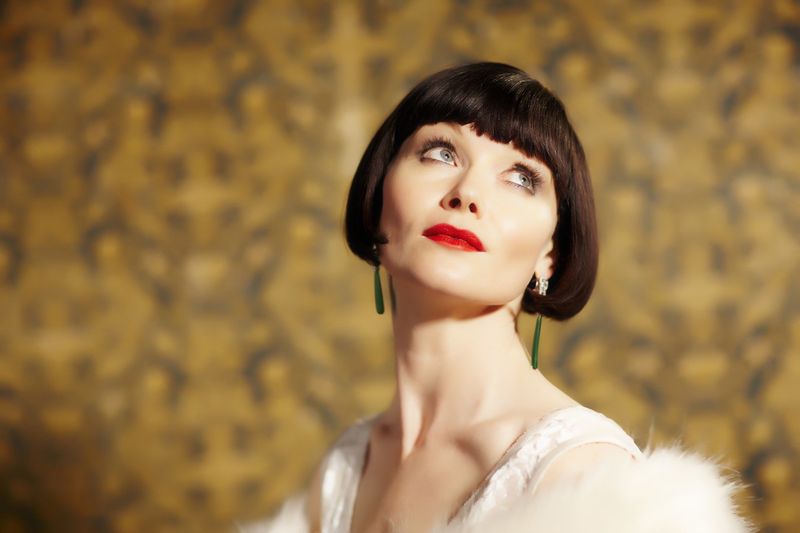 I forget who was first of the half dozen people on my Twitter feed to mention Miss Fisher’s Murder Mysteries earlier this year, but probably due to the first two series being available on Netflix, this fairly obscure Australian mystery series was suddenly in the collective consciousness in a major way.

Phryne Fisher is a private detective in 1920s Melbourne, and finds herself embroiled in everything from domestic killings to odd goings on at the circus to the sinister threat of her sister’s murderer, all whilst dancing (sometimes literally) rings around the local constabulary. What makes Phryne one of my character picks is that she’s so gloriously improbable. She’s a crack shot, an expert lockpick, handy with a grappling hook, an accomplished fan dancer, wealthy and privileged, saw some kind of service in World War One, is more sexually active than most male leads ever get to be, and does all of these things in a series of outfits so outlandishly a la mode she may as well have stepped off the pages of a fashion magazine. The world needs more Phrynes. 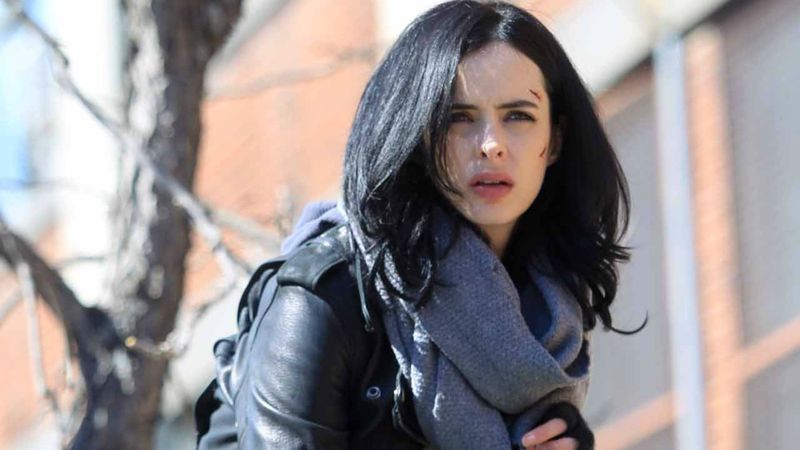 Oh how I worried about Netflix and Marvel getting Jessica Jones right - it felt like a lot was riding on it in the depressingly male-centric Marvel Cinema and TV Universe, never mind the challenge of serving such a complex, compelling and in many ways difficult to like (not to mention Brian Bendis’ best ever) character. Fortunately they did it, and with style.

One of my favourite things about Jessica is that she’s clever - she researches before she goes to confront her suspects, and she’s a great improviser when circumstances require it. She’s not just (in fact she’s barely even) defined by her powers. From the start I was more convinced by Jessica and her supporting characters than I was when I watched Daredevil, which is not a slam on the latter, but praise for how well Jessica Jones was put together. The combination of damaged, weary, cynical and at the same time strong is hard to pull off, but between Krysten Ritter’s performance and the production’s smart storytelling choices it works perfectly. More please, and soon. 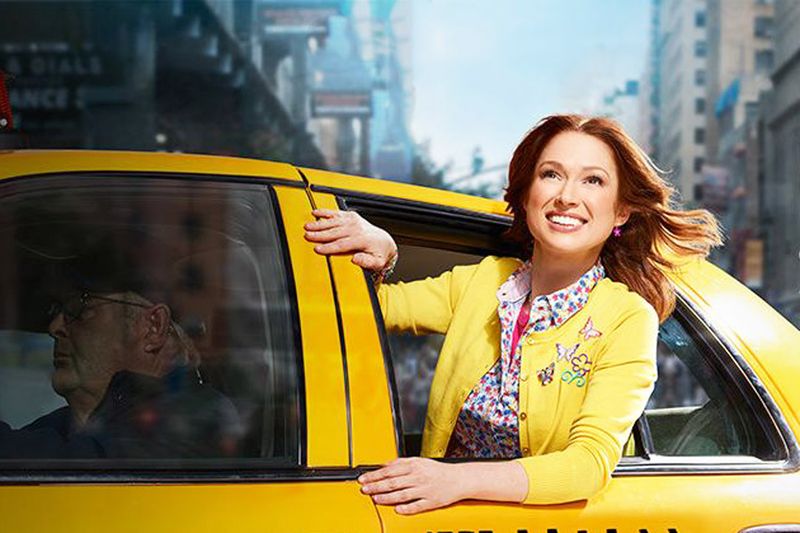 Improbably optimistic doomsday cult survivor arrives in New York and improves the lives of those she meets. I seriously doubt anyone but Tina Fey could have sold that pitch.

Kimmy is a proper one-off; worryingly close to being a Manic Pixie Dream Girl but retaining independent drive enough to stay the protagonist of her own story. Structurally, The Unbreakable Kimmy Schmidt isn’t perfect - the protracted diversion away from New York for Jon Hamm’s trial undercuts the strength of Kimmy’s fish-out-of-water ability to enact change, but fortunately the character is strong enough to retain its integrity and keep delivering the off-kilter promise of the early episodes.

Kimmy’s charm isn’t in her homespun philosophy or that improbable optimism; it’s actually in her unexpected strength and determination.  Doomsday cults have never been so entertaining. 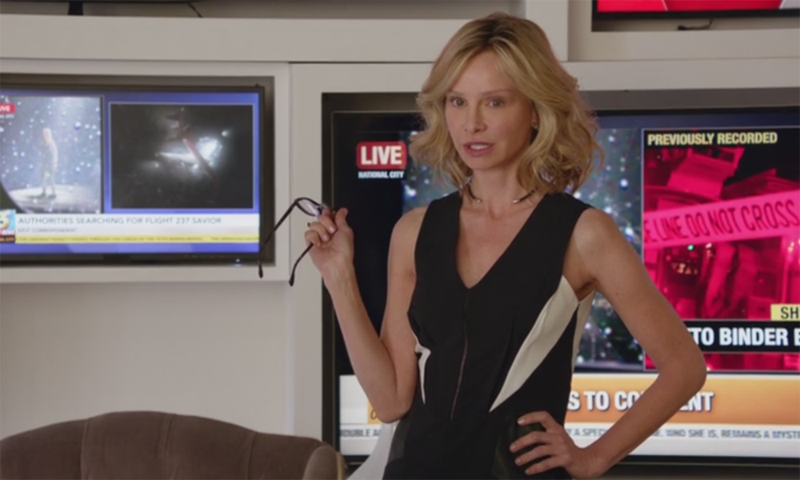 Unquestionably the most interesting character in Supergirl is not Kara herself - and it’s certainly neither of the lovestruck sidekicks - but Kara’s boss, Cat. Though not at first. Initially Cat looks like a seriously one-dimensional media career type with neither depth nor much humanity. Apparently cast from a particularly tiresome ‘career woman’ mould, on first viewing I wasn’t optimistic, but over the first half dozen or so episodes of the series she has demonstrated that she’s significantly more than her stereotype without the cheesy softening that’s the usual trajectory for characters like her.

Her actions in "Human for a Day" in particular showcased her fascinating contradictions: her motivations are 100% selfish; to prevent Maxwell Lord trashing Supergirl (‘her creation’), and hogging the limelight himself, but her message, appealing to the positive and human in a beleaguered populace, is entirely sincere and highly effective, as is her ongoing coaching of Kara in her non-Super identity.

The three-way relationship between Kara, Cat and Supergirl is far already more effective after only a handful of episodes than most depictions of the similar Clark/Lois/Superman dynamic, and most of that is down to the unexpected depth that Cat brings to the party. Best of all, the reveal towards the end of "Hostile Takeover" shows her to be far sharper than we realised, and should shift that dynamic into far more interesting places when Supergirl returns.