This week's guest is author Kim Curran, helping us end the year with a bang! Take it away, Kim...

2015 has, in many ways, been goddamn awful. Just an endless barrage of humans being utterly shit to each other. Quite often social media is criticised for bringing out the worst in people, of stoking the already ravenous fires of hatred and fear. Studies have shown angry posts spread the fastest across social channels and we all know there’s something about the anonymity offered by the internet that turns even reasonable people into trolls. And then there’s the smuggery. Oh, god, the smuggery.

However, between the rage blackouts and insufferable hotdog-leg pics, 2015 has seen some glimpses of pure perfection on social media. Moments where humanity has been its best self: creative, empathetic, generous and above all hilarious.

So here’s my list of my Top 5 best moments on social media. 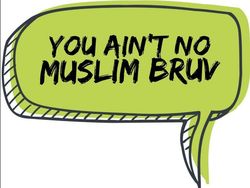 Before the shockwaves of the attack in Leystone tube had really hit, the hashtag #youaintnomuslimbruv had already started trending, thanks to a video shared from the scene. While police wrestle a man to the floor a Londoner can be heard shouting “You ain’t no muslim, bruv.” A perfectly London response to the horror of the attack.

In that simple phrase he spoke for all British Muslims and for all of Britain.

Of course, this swiftly became one of the worst moments of the year when David Cameron got hold of it. But, hey, that’s social media for you. There’s not a thing of beauty that can’t be ruined by some smug twat.

If there’s an award for the best Instagram Bio, then it should go to one Baddie Winkle. The woman came as a wonderful, indomitable reminder that you are as young as you feel. Which in Baddie’s case must be about 15. She’s a great big fuck you to the idea that women can’t be beautiful after a certain age. I spend a lot of my life surrounded by brilliant people a lot younger than me and I often feel ancient. When that hits, I scroll through Baddie’s pics and make a pact with myself to be half as spirited as she is at half her age. 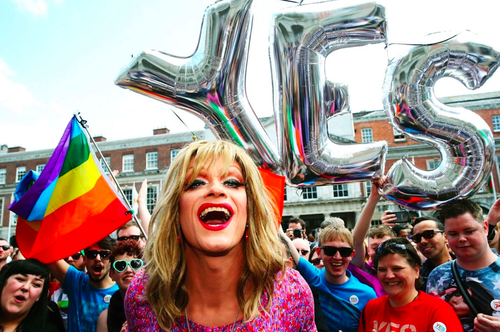 This year, Ireland (my home country) held a referendum on equal marriage. This in itself was a historic moment for a country that can be a bit of an embarrassment when it comes to equal rights. But what elevated it to sublime was the thousands of people sharing their journeys home using #HomeToVote.

Irish citizens who had left the country less than 18 months before the referendum found out they were still eligible to vote. However, they needed to show up at a polling booth in person to cast their vote. Cue the rainbow-flag waving exodus home. It was described as “that bit in Return of the King, when the elves appear on the horizon and save the day.” And it was glorious.

2: Patrick Ness fundraising for Save the Children

This came as a response to a moment of total hopelessness. The heart-breaking picture of three-year-old Aylan Kurdi went viral along with the hashtag #KiyiyaVuranInsanlik (humanity washed ashore). His death became a symbol of the full horror of the human tragedy playing out across Europe’s shores. And I, for one, wanted to turn away.

But, instead of giving in to the hopelessness of the situation, Patrick Ness decided to do something. Angered by the British government’s feeble response to the refugee crisis, he tweeted on the spur of the moment:

His example became a beacon to which people flocked. Mainly writers, publishers and readers. Within hours, it had raised £10,000. One hour short of a week later, that number was $1,000,000.

Every time I checked Patrick’s JustGiving page and watched the numbers rank up, I broke out in tears at just how wonderful people could be.

The page is still up and you can still give.

Why aren’t we all still talking about this? Why isn’t Cameron met with a salvo of snorts every time he opens his mouth? For a moment, when the news broke, I truly thought we might be able to bring down a government with humour. Alas, this sublime moment wasn’t to last. But, while it did last, it was magnificent.

I lay awake at 2am with tears of laughter streaming down my face because as Twitter out did itself with brilliance. The piggy puns came thick and fast. The photoshoppers got in on the act. Social Media was its most brilliant, creative self. For a moment, we were all united by the sublime, absurdity of the whole thing.

Many people mistook the excitement for anger and became angered themselves as to why everyone was getting so #snoutraged about this while ignoring #Hameron’s true crimes. To me, they were missing the point.

The true glory of #baeofpigs was precisely because no one got hurt. Every other horror this year has presented us with had to be looked at through the sieve of our hands: moments too awful to comprehend, too terrifying to think about. And yet, here was something that symbolised everything that is wrong with the British class system, everything that’s wrong with British politics. But instead of turning away, we could stare it straight in its beady, piggy eyes and laugh. And laugh and laugh.

And I am still laughing.

Special mention: #PorteOuverte when the people of Paris opened their doors and their hearts to anyone seeking refuge the night of the Paris attacks. It hasn’t make my list because the hashtag was quickly rendered useless by everyone using the hashtag to talk about how great the hashtag was.

This week's guest is author Kim Curran, helping us end the year with a bang! Take it away, Kim...

2015 has, in many ways, been goddamn awful. Just an endless barrage of humans being utterly shit to each other. Quite often social media is criticised for bringing out the worst in people, of stoking the already ravenous fires of hatred and fear. Studies have shown angry posts spread the fastest across social channels and we all know there’s something about the anonymity offered by the internet that turns even reasonable people into trolls. And then there’s the smuggery. Oh, god, the smuggery.