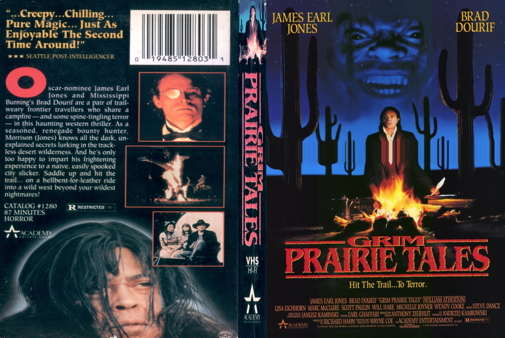 Brad Dourif and James Earl Jones. In a Western. That’s “The Good”. Without them, this film ain’t worth a plugged nickel. What the hell are they doing here anyway? Either it was a quiet month in Hollywoodtown or they couldn’t resist the chance to Western it up.

Anyway, Dourif plays Farley Deeds, an uppity, bespectacled “city boy” from Chicago, riding out to Jacksonville to meet his wife. I’ve got no idea which Jacksonville, but I’m guessing not the one in Florida. During a dark, dark, very dark night (more on that later) he is surprised at his campfire by a fur-wrapped, corpse-toting, tobacco-chawin’ bounty hunter name of Morrison: James Earl Jones in a spectacularly off-beat role for him.

The two get along about as well as you might expect, but in their cantankerous banter there’s something of a mutual fascination; a longing for company and conversation in the endless darkness of the prairie night.

Deeds: Listen you corpulent buzzard, I did not invite you into this camp to listen to this spew! Just who the hell do you think you are?

Morrison: Well. I think you might be good for a round or two yet.

Deeds: I don’t care what you think!

Morrison: You wanna hear a story?

Deeds: … what kind of story?

A horror story, as it turns out, which Morrison promises will make “bats fly out of your ears and your tongue blaze like a Marrakesh pig.” Sounds promising, eh?

Well, I’m sorry to disappoint, but the framing narrative sections featuring Morrison and Deeds shine out like glorious bookends on either side of some real tat. If the stories themselves were narrated by James Earl Jones, they might stand a chance of being better, but no. And so we’re galloping on to…

60% of this film is absolute rubbish. And yet, the other 40% where Dourif and Jones insult each other over the campfire is highly enjoyable, and certainly worth watching.

The problem comes with the stories themselves. Anthologies often run the full gamut in terms of quality – and there are always going to be some tales that are stronger than others – but here, they’re all pretty awful.

For one thing, they’re not scary or horrific in the slightest. They’re not even that “weird”. They veer more towards psychological horror or morality fable than full-blown creep-out fest. One exception might be the second story. (Anyone who’s seen this film will remember it vividly…) No spoilers, but I’ll just leave the phrase vagina dentata here.

Morrison gleefully tells three tales, including the one mentioned above. Deeds offers one: an odd story of the “monster inside us” variety, about a seemingly decent father who is, in fact, a murderous racist who participates in lynch mobs. It’s pretty garbled, both thematically and narratively, and as a result, we just come away from it feeling disgusted and a bit confused. Basically, the stories are neither very well written nor entertaining. So you’d be forgiven for fast-forwarding through them, to get back to the campfire repartee.

One explanation for the film’s inconsistency could be the inexperience of its director, Wayne Coe. Grim Prairie Tales was a labour of love for Coe: a Hollywood storyboard artist who designed the original poster for Back to the Future, among other things. This was the first film he ever wrote or directed, and to date remains the only one. Apparently he put a lot of money into the production, and wasn’t happy when the powers-that-be mucked around with the final cut. I guess all of this goes some way to explaining the discrepancy between the sections. But it doesn’t make those shoddy stories any better.

Now, I’m a big fan of low budget films. I think they can encourage innovation, resourcefulness and a kind of manic genius in filmmakers, which is often lost as soon as Hollywood chucks a big bucket of millions their way. (Cough cough Tim Burton cough).

Grim Prairie Tales is definitely on the low side of low-fi, but some of it is quite endearing. James Earl Jones sports a wig that’s even worse (better?) than the one he wore for Conan the Barbarian. The studio lights are repeatedly reflected in Dourif’s glasses. The day-for-night shots are excruciating in their blueness, and overall, the film is so dark, that it’s hard to tell what’s happening a lot of the time.

The quality doesn’t help. Grim Prairie Tales was only ever available on VHS, so it hasn’t benefited from a DVD spruce up. It’s a hard film to find, cropping up sometimes in charity shops and at car boot sales. It’s the type of thing you might find yourself watching during the long night of the soul that is BBC 2 at 4am.

But for all of that, I’d say if you can lay your hands on a copy, watch it. As Morrison and Deeds ride off into the sunrise, their growing friendship is sure to put a smile on your face… Forget Butch and Sundance, this is a pair who should’ve had their own TV show.