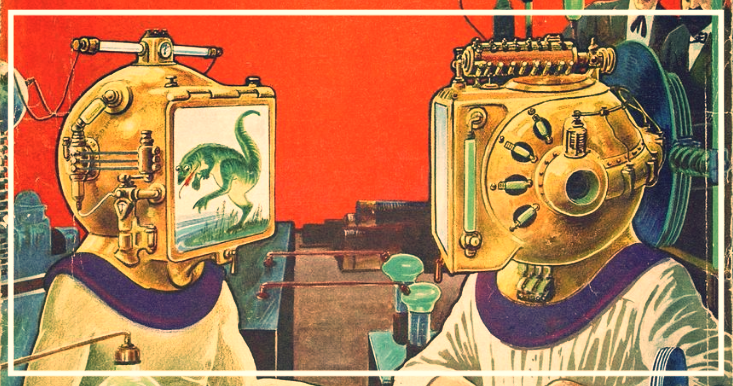 The editor of this magazine [Ray Bradbury], under the impression that I am still one of that queer tribe known as science-fiction fans, has asked me to write an article. I am no longer a science-fiction fan. I'm through! However, I have decided to do the article and explain with my chin leading just why I am through.

As to science-fiction; the trouble with me, I think, is that I have outgrown the stuff mentally - and that's not a boast, seeing the type of minds modern science-fiction is dished up for. I'll admit there are a few exceptions, but on the whole, SF fans are as arrogant, self-satisfied, conspicuously blind, and critically moronic a group as the good Lord has allowed to people the Earth. I don't blush that I was once a SF fan, starting back in '26 - I merely thank my personal gods that somewhere along the route I woke up and began to see SF as it really is. The superiority complex found in group known as science fiction fans is probably unequalled anywhere. Their certitude in their superiority, as readers of SF, over all other fiction, is representative of an absolutely incredibly stupid complacence.

Facing the business squarely, we can see why SF lays claim to such superiority: for no other obvious reason than that such fiction is the bastard child of science and the romantic temperament. But not, good lord, because it is instructive! This has too long been preached, until SF readers actually believe it! The amazing naivette of these readers who think their literature is superior merely because they think it teaches - this simply moves me to despair.

The fact is, any literature whose function it is to teach, ceases to be literature as such; it becomes didactic literature, which is the color of another horse. When literature becomes obsessed by ideas as such, it is no longer literature. Just how the delusion could have arisen that writing, because invested with scientific symbols, automatically became possessed of new and more precious values, is beyond me to explain. Ideas are out of place in literature unless they are subordinate to the spirit of the story - but SF readers have never perceived this. "Give us science!" they shriek, running with clenched fists uprisen to the stars. "We want science! Give us the Great God!" Well, they are given science, and what does it turn out to be? For the most part the off-scourings of the lunatic fringe. Talk about scientists being inspired by SF stories - whew! Why, not one SF writer in fifty has the remotest idea of what he is talking about - he just picks up some elementary idea and kicks hell out of it. I'll wager that no scientist is going to produce very spectacularly on the basis of any ideas provided by SF. It's possible, but wholly improbable. Scientists don't tick that way.

Another amusing fallacy: this well-known business of Wells and Verne doing some predicting. It's one of the biggest laughs of all. They made a flock of predictions, a few of which were realized, and some only in ways most vaguely related to the original conception. How many ideas did they have that never have been realized and never will? Give them credit for being good and often logical guessers, perhaps - but don't claim that as a merit for their writing! And how many other good guessers must there have been who never got around to setting down their predictions in print?

There is but one affectation about Wells' "scientific" stories which he published before he discovered his capability at characterization, and this is the affectation of imagination. There is no genuine imagination in beating out cleverness of the SF type; the point of view, the inventive quality necessary for their construction, is the same as with the widely circulated tales of Nick Carter. Science-fiction stories are not struck forth with a creative hand, they are manufactured products put together piece-meal - none of them being written in any but the calmest and most conscious mood. They are lacking in that important element of all really great works of the imagination: inspiration. And what is inspiration? It is essentially the soaring of one's soul without the knowledge of the mind. In the gleaming moment the mind becomes the slave of the spirit. Read Wells' Experiment in Autobiography and see why and what he thinks of his early writings of SF. He admits that they were only a means to an end, a preparation for his more serious writing that was to come later - Plato's Republic and More's Utopia also serving largely to hasten Wells' Utopian proclivities. When he really began to take his predictions seriously, he began to turn out the important stuff which now bores the average SF enthusiast silly—or should I say sillier!

As for Verne, his stuff has never been literature except for boys. It is innocuous adventure - stuff that will not pervert morals. It is not too badly written, and the language is so simple that Verne is readily to be read in the original French, in fact some of his stuff serves as textbooks in French classes in American schools.

But in the main, what I am speaking about now is SF as it is constituted today. All of this modern SF is worthless except in perhaps one minor respect, and I'm not even sure of that. It can open the minds of boys and girls reaching puberty, giving them a more catholic attitude toward startling new ideas. However, it is so very often fatal at the same time, in that these boys and girls become obsessed with it - it enmeshes them until, as I said, they become incredibly blind to all else, so certain are they of the superiority of their hobby over all other fiction. There are exceptions, but my experience has proven that the exceptions are by far a minority.

Also I will admit that SF can on occasion provide escapist flights of imagination - in fact, it can be admirable for this; but this type of SF has become exceedingly rare because this crazy superstructure of science, and even more so adventure, has become such a fetish that sound writing concerning people is rarely to be found. In pulp science-fiction, never.

And the frightful smugness fostered by the modern SF magazines is simply appalling. It seems that not only the readers, but the editors and writers as well, cannot or will not see anything beyond their own perverted models. Just as one example which I remember very well, look how Brave New World, the admirable and really important novel by Huxley, was received a few years ago. It was Clark Ashton Smith, I believe, who mentioned it as embodying some of Huxley's "habitual pornography"—simply, stunning P. Schyler Miller; whom, I might mention, I consider as one of the most intellectual authors and fans. And, reviewing the book, C.A. Brandt also decried its preoccupation with sex, but said complacently that it might, at least, bring to the attention of people that there was such a thing as the science-fictionists and their so-called literature. Of all the damned nonsense! Brave New World was, as a matter of fact, a satire on sex, and of far more importance than to "bring to the attention of people that there is such a thing as sci-fiction." Huxley conceived a future world in which Ford's mechanistic contributions had become so emphatic as to deprive the people of all but an animal interest in sex; he projects a more normal man into such a civilization for no other reason than to characterize present-day tendencies with searing satire. But Brandt - he evidently would demolish this to set up in its stead a "Space-wrecked On Mars" atrocity.

To get back to the subject, it is my honest opinion that no person of very conspicuous intelligence can subsist very considerably on SF after he begins to mature intellectually. There is simply not enough to it to provide intellectual or spiritual nourishment. He may string along with it for a few years out of habit or some mental quirk - but stuff aimed at juvenile minds cannot very long sustain a person of mature years, unless that person is himself a mental adolescent. The way the fans flocked to the SF League, indulged in "tests" to prove their "superiority" over other readers, the silly letters in the mags, the petty internal strife, and many other things, have served to widen the gulf between me and SF.

The most important thing, however, is that I have discovered that there's been too much else of importance, real importance, that has been said and written in this world (and is being and will be), for me to desire to give much attention to such a petty thing as SF any more. I shall read on the fringe of it, but increasingly less frequently I'm afraid.

I might have summed this entire thing up by saying, "I'm satiated," but that wouldn't be the entire truth. The entire truth would be: "I am satiated and much wiser." In conclusion let me point out that this is only one man's opinion. I have intentionally been harsh in my estimates, maybe some points are in need of qualification or elucidation, but by and large, I stand back of what I have written here. Amen.

First published in Futuria Fantasia (Vol 1, No. 2), Fall 1939 by Henry Hasse, under the pen name 'Foo E Onya'. Worth noting that Hasse, under his own name, wrote a rebuttal to 'Onya' in the next issue. Henry Hasse - wrote or co-wrote numerous short stories.

I've made a few small changes in punctuation and spelling, including updating the author's original 's.f.' to the more modern and aesthetically-pleasing 'SF', 'enuf' to 'enough' and 'laffs' to 'laughs'.

The editor of this magazine [Ray Bradbury], under the impression that I am still one of that queer tribe known as science-fiction fans, has asked me to write an article. I am no longer a science-fiction fan. I'm through! However, I have decided to do the article and explain with my chin leading just why I am through.