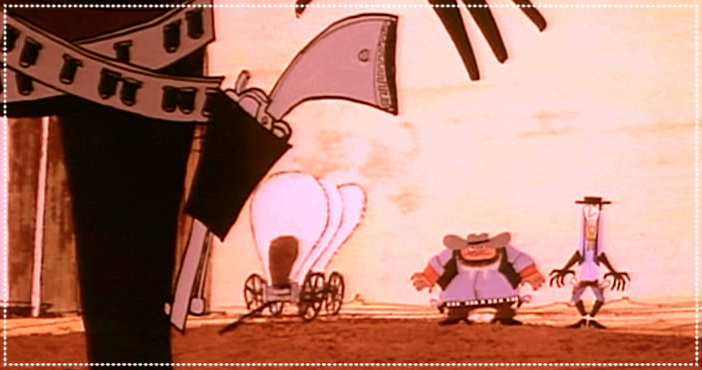 One of the most interesting things about West & Soda – and, trust me, there are many – is that it seems to have anticipated the Spaghetti Western genre, as made famous by Leone and Morricone, by a year or two. Yes, officially A Fistful of Dollars came out first in 1964, but work on West & Soda had already been going on for two years by that point, since early 1962. 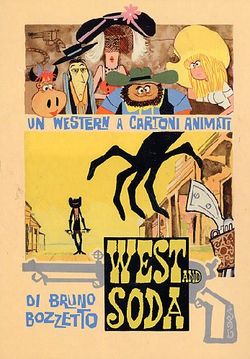 Sure, there had been Euro-Westerns before this, but they had either been out-and-out comedies or dramas. None had yet sidled, catty-cornered, up to the Western in order to tackle it with irony and wit, whilst still retaining timeless features of the West. So what was happening in Italy in the early ‘60s, that meant directors were suddenly taking an interest in a genre that was generally accepted to be past its prime? That’s a genuine question, by the way. I’ll look into it for y’all, but if anyone has any theories, do holler.

Anyway, West & Soda is a definitive Spaghetti Western. Director Bruno Bozzetto’s aim was to take elements from classic Westerns and mix them all up together, like a cocktail. Hence the name. It’s undeniably a parody, but it’s one with a great deal of love for the genre and its traditions. It’s scrappy, surreal, soulful and full of the kind of youthful virtuosity that’s impossible to fake. So without further ado, we’ll gallop on to…

Jeez, so much good. Where to start? First, I guess, the animation. Even if you’re not a Western fan, this film is worth watching for the art alone. At first glance, the style is all flat planes and hurried lines, but there’s a beautiful depth and texture to everything that’s still fresh and visually exciting, even after fifty years.

Giovanni Mulazzani, the Artistic Director and Background Artist, was only 22 when he made West & Soda and had never worked in animation before. His background scenes lend the film much of its character; they feel gritty and stained and travel-worn. Apparently, he experimented endlessly to achieve this. He’d paint scenes in tempera and wash half of it off, splash the backgrounds with ink, scratch into them with old nails…

West & Soda was, in fact, a first for most of the crew. Even Bozzetto – a veteran at 26 – had only made shorts in the past. “We started irresponsibly as beginners but had a lot of fun,” he said. “Enthusiasm and the will to work hard was there because in Italy there was no tradition of cartoons, let alone feature films…”

Unsurprisingly, inspiration came from wherever they found it, from Disney to Fellini. Bozzetto liked 8 ½’s moody, ominous score, and so asked the composer Giampiero Boneschi to write something similar. He then threw in some swooping, orchestral motifs reminiscent of classic Westerns, and a few comic sound-effects – like horsey clip-clops – for good measure. It sounds ridiculous, but somehow it comes together as a coherent soundtrack.

Similarly, some of the best parts of West & Soda are the fight sequences, without any dialogue. They’re a perfect showcase for the art and animation, combining absurdist physical comedy with damn good timing.

Witty elements criss-cross this film like wagon tracks. After kidnapping the film’s heroine “darling Clementine”, the evil and squat Land Boss Il Cattivissimo, true to his name, starts chasing her round the floor, scratching at the furniture and wigging his bum in a feline manner. Everyone knows I love a good pun, and there seems to be a lot of wordplay going on throughout the film. I say “seems” because 1. I don’t speak Italian, and 2…

The subtitles. Oh, the subtitles. They are truly awful. Most of the time you can just about get the gist of what the characters are saying, but occasionally the translation is so garbled and woolly that it’s unreadable. On the up-side, the film’s plot, characters and scenes are often simple enough to be self-explanatory, but overall, it’s a shame not to be able to get a better idea of the script and its jokes. Anyone out there speak Italian and fancy rustling up a better version?

“The Western carries a tale within itself,” Bozzetto once commented, and it’s true that West & Soda doesn’t make any attempt to stray from the well-trodden path of the Western tale. There’s an evil land boss, his slim-and-round henchmen, a perfidious saloon girl “E$merelda”, a hoard of Injuns, a ranch-owning heroine and mysterious “Johnny”, the lone gunslinger who rides in to save the day. But this is of course the point; in true revisionist style, West & Soda both revels in its inspiration and flips it on its head to create something simultaneously surreal and authentic-flavoured.

Johnny, for instance, turns out to be an unwilling gunslinger: he has “complexes” about shooting after killing his analyst in self-defence. Clementine – half wilting maiden, half pissed-off rancher – spends a lot of the film dragging him around by his feet, hindered by her alcoholic dog, or literal boozehound, Socrates.

Some of the gags, visual or otherwise, work better than others, and some are definitely showing their age. But, overall the film has an air of scruffy silliness that makes it something special, even today. “We were young and keen to do something weird,” Bozzetto once shrugged in an interview. Guess that explains it.