Here is a man who has been endlessly mocked for his previous (first and only other) single "Eye to Eye". He knows this - there’s no way he doesn't know this - but he doesn’t care.

He's back, he’s better than before and he’s got no fucks to give.

There have already been a dozen articles about Taher Shah, both in Pakistan’s local press and the international press. They’ve collectively made fun of his looks, his weight (the Washington Post calls him "Pavarotti's pudgy nephew" while reminding us that he also lacks Pavarotti’s vocal skills), his untrained, un-autotuned voice, his sartorial sense or lack thereof, the amount of make up he’s wearing, his tiara… all of it, really. He’s even been sarcastically compared to Disney Princesses because, of course, comparing a man to a cartoon princess is…emasculating? Insulting? Or something of the sort, I assume.

Let’s break this down. "Angel" features Taher Shah in make-up. Wearing a tiara, a gown. He's got wings. A wand. Long flowing locks. He has a female partner in equally camp gear, there is a baby angel too. Shah has a weak voice, admittedly, but a raw one, unadulterated and unfiltered and - let’s face it - earnest; unapologetically asking for you to be the very best you can be.

The song itself is simple enough: Shah believes that people can be as good, as kind and generous as angels on earth, living life with kindness, humility and love. Here’s the ideology behind the song, as explained by the man himself - it’s not the clearest or most succinct explanation, but it’s a very basic principle. It may not be genius philosophy, but it’s sweet and a far cry from the usual "I Just Can't Keep My Hands to Myself" line of current pop song lyrics.

(It does lead me to wonder if mermaids really do live alone though. Like any almost extinct creature may.)

The video, which has already racked up over a million views on YouTube alone (yes, we have YouTube back in action in Pakistan), features Shah walking around a golf course, dressed alternately in a purple robe, tiara and silver wings, and a blue gown and wand. 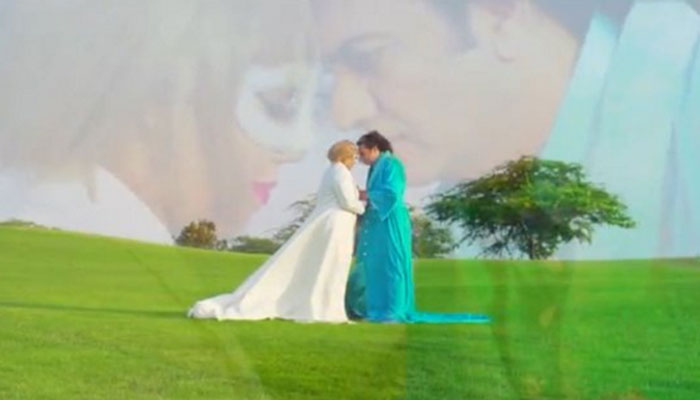 Shots of him singing are intercut with shots of a woman in a white gown, mask, tiara, wings and wand. The two angels find each other and have a baby angel who dresses just like daddy and, though he starts off blonde, he does not remain so. They all admire bougainvillea and each other and are happy. At some point, Shah does a spoken word bit, standing before a group of men in hooded white gowns. I have no explanation for these men. Are they back up angels? Ancient gods watching over the angels on earth? It matters not - they’re part of his vision and Shah did not edit that vision to what was acceptable to (or even understood by) the audience. Honestly, that pretty much makes him the China Miéville of Pakistani pop music.

Sure, maybe he’s confused angels with fairies (hell, maybe they’re the same thing - can you prove him wrong? Can you? I didn’t think so), but the entire angel reference does make me wonder about his safety. We’re in a country where the blasphemy law gets thrown about a lot; where people have been shot trying to protect those who have been jailed under this law. And here he is, dressed up as an angel -a divine being. Artistic liberties are risky here, so this is pure madness in a place where people have been jailed for less. Madness, or straight up rebellion - or are those the same thing?

People have also made fun of Shah’s English language skills. It's not his first language, yet he tries his damnedest. Sure, "Eye to Eye" featured the line "Without you/I am a butterfly/without fly", probably trying to say that he was a creature with wings that couldn't fly, even on a literal level. Before you write this off, don’t forget Fiona Apple singing in "Hot Knife" about actually, literally being a ‘pat of butter’. If she can do it, why can’t Shah?

I spoke to Mobeen Azhar, a journalist and film maker associated with the BBC who has previously documented the music of icons like Prince, about the Taher Shah phenomenon. "Sure, the lyrics are funny and the singing is a bit wonky", says Mobeen. "We can laugh if we want to. I don't think he gives a shit. There's something bigger going on here. If the purple velvet robe and cardboard angel wings were framed as exclusive, high brow performance art, many of us 'clever types’ would be rushing to applaud Taher's subversions. But he's accessible, he's fun and he's brash, so we just laugh at him instead."

Mobeen’s right. Imagine Gaga pulling off the same camp look. Didn’t Michael Stipe wear massive angel wings in "Losing My Religion"? (A hugely popular song in Pakistan, incidentally). Sure, Gaga and R.E.M have huge budgets and Taher Shah has... whatever money he earns that he can put towards his music - he’s writing and producing this all independently, there is no record label, no ace director, no cinematographer, no choreographer… you get my point. There is no one but Taher Shah and Taher Shah pulls no punches; he takes no prisoners. On his own, armed only with the knowledge that his first single was torn to shreds until it became a cult hit, he set out to do what he wanted. And it seems he’s getting away with it. Mobeen reminded me of Pakistani folk singers like Arif Lohar, who was perfectly happy to wear pink shalwar kameez', have long hair and shiny waistcoats (albeit ethnic ones) and, more importantly, Pakistani legend Abida Perveen, who thrust her way into the very male arena of qawalli and made her own space regardless of what was acceptable from a woman or not. Like them, Shah too seems to be chucking aside gender norms aside and doing what he loves best.

Mobeen adds,"he wants to dress like a cherub and sing about universal love. Good for him. Pakistani's need more tiaras. We need more sparkly velvet and we certainly need to focus on universal themes more, and what could be more universal than 'man kinds angel'? My point is, in a nation that is increasingly famed for religious conservatism and violence, Taher is doing what trans women, Abida Perveen and the men and women I see at shrines do every day - he is challenging the idea that Pakistan is a nation of burka clad doom-bots."

Not just is Shah challenging that idea, he’s giving plenty of creative Pakistanis a reason to believe that it is indeed possible to make your art the way you want to, even if it means most will tear it asunder. Sami Shah, a Pakistani comedian and writer and I discussed this, coming to the conclusion that we both had nothing but admiration for Taher Shah. "I know how hard it is to create stuff and put it out there," says Sami, "and so many of us sacrifice our dreams for practical concerns. Get day jobs, pay the bills, etc. For him to say, 'No, I want to do this,' that's cool. Yes, the work is terrible, but that's subjective (although his might be the only objectively terrible work, which is why it's so fascinating). We never have a guarantee that the art we create will actually be any good. We just do the best we can, and then the world decides. So for him to say, 'Screw it, I don't care what people think, I'll create what I want to and that's all that matters,' that's awesome. If we had created the same thing with irony, we'd all be calling him a genius. But because he did it with sincerity, it's easier to mock him. I don't like what Tahir Shah makes, but dammit I like living in a world where he makes things."

So tiaras off to Taher Shah, I say. In a world where we simultaneously tell people "you be you" and yet snicker at them when they are, he’s a vibrant star, a unicorn. Sparkly wings, rainbows, tiaras and all. This is his art, and he’s being true to it in the purest way he can. Everyone else be damned.