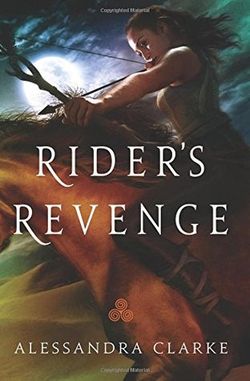 Soldiers from the Daliphate, a neighbouring empire with a wildly different culture, kill her father, and break the White Horse Tribe. K'lrsa sees everything she loved fall apart around her. She clings to two things: a vow of revenge and mysterious visions, seemingly granted by one of her people's enigmatic gods. With those propelling her, K'lrsa leaves her ancestral lands on a impossible quest to slay the almighty Daliph.

K'lrsa's quest is, to put it kindly, optimistic. She's never been outside her tribe's borders, and rides forth with some very flawed assumptions. The tribes are nomadic, honor-bound and egalitarian. The rest of the world, she finds, is definitely not.

K'lrsa enters the Daliphate as a slave, a rather naive plan that seemed a lot better in theory than practice. A fiercely proud young woman, her new lot in life is hard for her to swallow. In the Daliphate, not only is she a slave, but she's also a barbarian and a woman. By virtually every measurement, she's at the bottom of the heap; powerless and in an alien world. The only thing she can cling to is the purity of her mission, but when her visions and her vow come into conflict with one another, even her vengeance becomes unpicked.

Rider's Revenge doesn't shy away from its primary theme: K'lrsa's agency. Around her, wherever she goes, she sees people making bargains, forced into roles, having - whether by choice or not - their freedom stripped from them. Superficially, she's impressed by what 'civilisation' has to offer, from paved roads to permanent agriculture to a variety of tasty food. But the excitement of new flavours is a poor trade for the Daliphate's brutal feudalism, endemic slavery, or horrific misogyny. Frustratingly, as an outsider, only K'lrsa sees this, and a large part of her struggle comes from her trying to explain exactly why everything is so wrong. Several of the secondary characters are Riders or former Riders, which allows K'lrsa the opportunity to debate these issues at length. What prompts someone to give up their freedom - what price is worth it? Luxury? Revenge? Love?

K'lrsa's struggle - her movement from freedom to slavery to, er, a different type of slavery - is the core of this book, and makes for engrossing reading. It should be - and often is - dark and disheartening stuff. But K'lrsa is supremely strong, and clings to both her mission and her sense of self in a way that is both wondrous and encouraging.

Other aspects of Rider's Revenge are less fully realised. Her mysterious god-given romance never quite sticks the landing: they love (deeply and truly and passionately) because they have visions of loving (deeply and truly and passionately), but predestination is a poor substitute for chemistry. The core couple never get a chance to make it on their own; their connection is foreordained. And it is physical long before it is personal, meaning we're forced to take their compatibility for granted. There are also other gaps: the magic system is haphazard (I'm all for plot-focused magic systems, but this one is often a little too contrived), and the gigantic final conflict comes screaming in from far left field, featuring a Big Bad and what is best described as magical 'third act gun'.

So, let's run it through the gauntlet! In order to compare these six (very different) novels, I've created a set of criteria:

We'll tally the scores at the end, as these aren't all the same weight (the first 3 are critical, 4th is bonus points, 5th is kind of an auto-fail). And, of course, this is all utterly subjective. Bullet-point lists and use of the word 'criteria' are all very nice, but this is just a fancy-shmancy way of organising my opinions.

Is it entertaining? An easy yes. Rider's Revenge is a swift read, with K'lrsa springing from one tense situation to the next. The book quickly establishes that this is a ruthless, 'real' sort of fantasy world - characters die, betrayal happens, there's constant threat. Nor is it all set-piece action scenes - some of the book's best moments are quieter struggles, my favourite being K'lrsa's excruciating lessons in court etiquette.

Is it immersive? A very-scientific mostly. Rider's Revenge does two things very right and one thing... less so. The first is that the book brings the world and its cultures to life through K'lrsa's eyes. This means more showing than telling (huzzah!) and, for the most part, an attention to detail - the roads, the grass, the food, the clothes, the beds - that brings the experience to life in an immediate and accessible way. We're seeing K'lrsa's surroundings anew, just like she is. The attention to detail makes the little things powerful, such as K'lrsa's elaborate costume in court, or her first experience in an inn.

The magic, including the gods and K'lrsa's visions, is less solid. This is, at least partially, a thing done right: the magic very much supports the plot, not the other way around. Visions, rituals, spells - they exist to further the narrative. They're uncanny and unknowable and unquestioned.

However, as the plot thickens, the supernatural elements become less ineffable and more of a crutch. The religious visions are confusing, and detract from the love interests connecting in a more natural way. [SPOILERS] Similarly, the death magic is a mechanic bringing in a villain from out of nowhere, with no 'fair' foreshadowing. And, once introduced, having a resurrection mechanic undercuts a lot of the book's strength: atmospheric tension, supported by the threat of [permanent] death. [/SPOILERS DONE]

Similarly, other aspects of the fantastic, from K'lrsa's magic horse, Fallion, and her tribal 'moon stone', are never fully realised. They keep the plot moving, but in a hand-wavey way, existing more as MacGuffins than meaningful parts of the world. The reader never really understands what they're for, or why they're so special.

It it emotionally engaging? I think a kinda (that's not quite a 'mostly'). K'lrsa's quest for revenge is a motivational hook that gets her a-questin' in an empathetic way. That half of her internal conflict is solidly done: her drive to avenge her father, her ruthless and self-sacrificing pursuit of the Daliph - those are all simplistic motives, but understandable ones.

Her god-given visions are more ethereal. The enigmatic deities and foggy sex scenes do their best, but they really don't hold up their half of the bargain. K'lrsa's romantic plot, as noted above, comes without a real spark. So when K'lrsa has to choose between the two possible paths of her fate, one road seems much less compelling.

However, Rider's Revenge nails a sort of page-by-page tension, and engages the reader in the unsettling atmosphere and furious frustration that surrounds K'lrsa as she is enslaved in the Daliphate. I'm not sure we care for her as much as we care about her, as she's a symbol for youth and innocence in a decadent and corrupt world.

Although never explicit, there's always threat, as K'lrsa goes from a state of innocence to a dawning awareness of the horror that surrounds her. She's, if you'll forgive the trope, a 'noble savage', from a culture that's intentionally avoided contact with the rest of the world. As a result, K'lrsa makes obvious - but never 'silly' - mistakes, because the terrible things that 'civilised' people do to one another are, at least initially, beyond the scope of her imagination. However, the moments of joy - triumphant entries, grand speeches, stalwart new friends - are all the more celebratory for it. Even in the worst of places, there are still good people. There's the tense atmosphere, but this isn't a bleak book.

Is it different? Mmph. No. I think this is a good remix of existing tropes, resulting in a very readable Young Adult fantasy.

Is it embarrassing? Tricky, but no. Rider's Revenge is absolutely uncomfortable - fundamentally, it is about a young woman that becomes a slave in a really unpleasant society, so, absolutely, there are some dark and scary moments. But the key thing is that they are dark and scary; there's never a sense of sexualisation played for laughs or titillation. Slavery, violence and misogyny are presented as terrifying, disturbing and fundamentally wrong.

I thought 'Daliphate' was a silly name -  the society portrayed has an obvious quasi-Middle Eastern aesthetic, but also there's lot that isn't, making the name an unnecessarily provocative red herring. But, as with the noble savage shtick, nothing is played as an absolute. Rider's Revenge visits multiple ways of life and different perspectives. All of the cultures have absolute villains, but also allies, heroes and just-plain-ordinary people.

In a nutshell: Rider's Revenge is a fast-moving epic, featuring a heroine that's bravely thrown herself into unimaginable peril. On her quest for revenge, K'lrsa encounters a new world - one that challenges her honour, her self-belief, and even her self-worth.

As far as some of the fantasy 'conventions' go, Rider's Revenge struggles. The magic system, the big epic plot, the romantic build-up - these are the book's weaker points. However - impressively - Rider's Revenge does the hard stuff well. It has a compelling central character, strong, well-developed themes, and a palpably tense atmosphere.

This review is part of the SPFBO. You can learn more about the competition here, and our approach to it here.