The results are noted here, in a table, because that makes things 35.7% more scientific:

All in all, you can tell that this is a very rigorous and objective set of reviews. It also just so happens that this process gives us a score out of 5, which just so happens to be how the Internet-Illuminati-Amazon Tri-Axis Conspiracy has TRAINED us how to think. #bewarethelizardpeople #truthgate #gategate

As I survey my very scientific results, three things leap out:

1) Yeah. That feels about right. It isn't exactly my personal ranking (I liked Kin of Kings more than Malevolent, for example, and Traitor Blade, which I really enjoyed, is way too low), but these aren't Goodreads Review Stars, these are criteria points, so... sure.

2) Again, these scores don't necessarily correspond with personal taste, but, handily, my Mendoza Line sits around 2.5. Of these six series - for all these books are the first in a series - I'll be pressing on with 4 of them.

3) Sort of a continuation of the above, there are three tidy divisions:

There's also, in fairness, a fourth division - the 24 books that didn't make it this far. I'm not flagging those up in order to bully them, but rather to show that the overall graph is less of a bell curve and more of a long tail. Continuing with 4 of 6 series makes that achievement sound unremarkable - a bit like the NBA playoffs. The truth is that I'm continuing with 4 out of 30. I think there's a big sweeping, self-indulgent piece about what I Discovered and Learned about Self-Published Books This Summer, but, if I write it, it'll be after the SPFBO is long over.

Which is all very nice, but let's get to the point - I can only put one through to the next round, and, judging by my Special Scoring, I've got a tie. 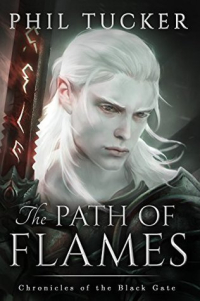 And what a tie it is! The Path of Flames is the most epic of epics, a world-spanning, wide-screen blockbuster. There's a world with a systematised, RPG-ready magic system, a thousand fascinating side-quests and nuances, multiple POV characters, each with their own quests, ambitions and secrets, and several scenes of fist-pumping whoop-ass - from cavalry charges to feisty speeches. All the best bits of the contemporary, post-Martin epic: fun, accessible and utterly immersive.

Plus, there's very, very impressive twist: a fantasy world that challenges its own system, and takes the 'high concept' secondary world conceit not at face value, but as something that should be subverted. I apologise, as that's vague, but that's also really important, and what elevates The Path of Flames something extraordinary.

There's no shortage of immensely entertaining epic worlds - from Stormlight Archive to Lightbringer to Death Gate - but, too often, the setting-shtick is all there is. These books are fantasies, of course, but they're also science fiction: SF that explores systematised, if impossible, secondary worlds. The Path of Flames goes a step further, establishing the elaborate set-up for the world... and then undercutting it dramatically; providing the book's core conflict, the characters' evolution, and a rather brilliant theme. It is a 'small' thing, but, for those of us saturated in a thousand, thousand epics, it feels like a big deal. 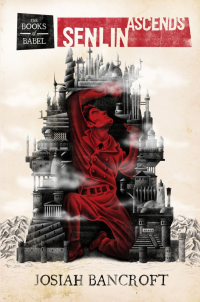 Senlin Ascends is, any many ways, the reverse. Structurally, it has a single person point of view, and is less of a sprawling quest than a single, focused, linear journey. Senlin has lost his wife somewhere in the Tower of Babel, and now he needs to find her. His path is literally linear - he goes straight up; floor by floor. But this simple structure is deceptive: each floor is its own (seemingly) discrete world. Senlin progresses from one surreal location to the next, and finds that each domain has its own set of challenges. Senlin Ascends is brilliant, abstract, distracting and maddening; a series of disconnected, but absorbing, encounters - the bastard child of Lewis Carroll and Franz Kafka.

Where The Path of Fire impressed me by being an entertaining, seemingly-conventional contemporary epic with hidden depths, Senlin Ascends surprised me by doing the opposite. The quality of Senlin is immediately and unassailably brilliant. It is a beautifully-written, lyrical series of stories, that, at first glance, strikes the reader as more of a collection than a novel. But.. what begins as a presentation of beautiful, disconnected, literary scenarios is revealed to have, well, hidden 'shallows'. There's a soaring adventure lurking beneath the surface; structured, visceral entertainment that ties together all the individual events. By the end of the book, it has turned from poetic mystery to soaring (literally!) adventure, all without losing any of its quality.

Which is a very long way of saying that it really sucks to have to choose between the two, and, to emphasise the point, here are some links:

Buy The Path of Flames

I have, as further endorsement, purchased the paperbacks of both. These are shelf-worthy books.

Anyway, I'm putting The Path of Flames forward into the next round. Fundamentally, despite all my criteria and long wordiness and self-reflection, this is a ridiculous situation with two books that can't be compared. And, after parsing over it for a week, I still don't like either of them any less. So, right now, I'm going to give it to the epic fantasy that manages to be clever rather than the clever fantasy that manages to be epic. That's a casual and dismissive way of putting it, and I may change my mind in 15 minutes, so let's post this article and move on! (srsly - read both books)

So congrats to The Path of Flames - and I look forward to seeing what the other reviewers have turned up!