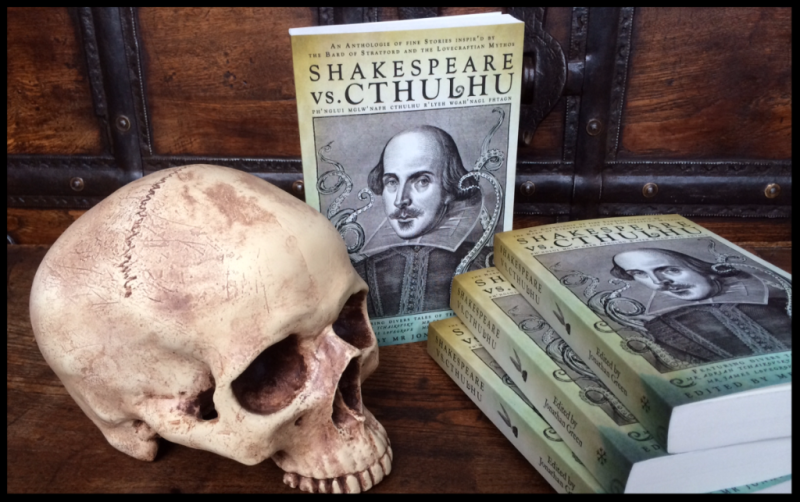 Imagine if it had been William Shakespeare, England’s greatest playwright, who had discovered the truth about the Great Old Ones and the cosmic entity we know as Cthulhu, rather than the American horror writer H P Lovecraft. Imagine if Stratford’s favourite son had been the one to learn of the dangers of seeking after forbidden knowledge and of the war waged between the Elder Gods in the Outer Darkness, and had passed on that message, to those with eyes to see it, through his plays and poetry… Welcome to the world of Shakespeare vs Cthulhu!

The 400th anniversary of the death of William Shakespeare seemed like the perfect time to bring together the fantastical worlds of the Bard’s plays and Lovecraft’s most terrifying creations – in fact, I found it hard to believe that no one had thought of doing it before – and so I set about gathering together a group of like-minded individuals: a cult, if you like, of authors who I knew could do justice to both the legacy of the Cthulhu Mythos and the greatest writer ever in the history of the English language. 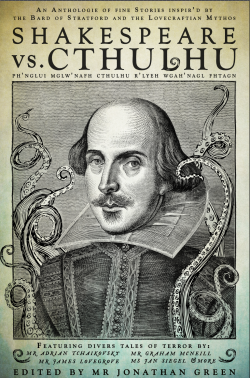 From a very personal point of view, Shakespeare has been a massive influence on my own work - and that was before I came up with the concept of Shakespeare vs Cthulhu. Like many people, I first encountered Shakespeare whilst at school, reading Lamb's Tales From Shakespeare before studying plays such as Macbeth, The Tempest and Hamlet for GCSE and A-level. Later I went to university in Shakespeare's own county of Warwickshire.

My very first published book, the Fighting Fantasy adventure Spellbreaker, was heavily influenced by Macbeth, making, as it does, witches the main focus of the story. My second book, Knights of Doom, used the driven war-hero-who-would-be-king, his fiend-like queen, and their castle home. There's even a very unsubtle reference to Banquo's ghost in the book. Bloodbones (which is now available as an app from Tin Man Games, with its own soundtrack and everything!) was inspired, in part, by The Tempest, while Night of the Necromancer drew heavily on both Hamlet and Macbeth for inspiration.

However, nothing I have had a hand in producing before has had such a direct link to the Bard as Shakespeare Vs Cthulhu. The concept of mashing Will.i.am Shakespeare’s most famous plays with Lovecraft’s most infamous monsters really inspired the authors involved as well, and some of their inspiration has, in turn, rubbed off on me.

So in some alternate reality, I like to imagine that the following plays might have been performed on the stage of The Globe, in Southwark, once upon a time…

Two warring families. Two star-crossed lovers, one of whom becomes the mortal vessel of the All-Mother, a.k.a. The Black Goat of the Woods with a Thousand Young. Fair Verona dies in blood and flames.

Never was there a story of more woe…

2) The Taming of the Shoggoth

Lucentio arrives in Padua to study and falls in love with Bianca, the younger daughter of the rich merchant Baptista. Bianca is also being wooed by Gremio and Hortensio, but Baptista will not allow her to be married until a husband is found for his older daughter Katherina, whose aggressive character has made this extremely unlikely. Gremio and Hortensio decide to join forces to find a husband for Katherina.

Petruchio agrees to help, by marrying Kate – especially when he learns the size of her dowry. At his first meeting with her, he takes no argument from her and insists on marrying her despite her angry protestations. Baptista willingly agrees, leaving Bianca’s suitors to argue their respective cases among themselves.

However, in the interim, Kate is killed and eaten by a Shoggoth, and in a typical Shakespearean example of mistaken identity, believing the amorphous monster to be his new wife, Petruchio sets about trying to tame ‘her’. All Padua dies in blood and flames…

King John receives an ambassador from France, who demands that he renounce his throne in favour of his nephew, Arthur, whom the French King, Philip, believes to be the rightful heir to the throne. John refuses.

In France, King Philip and his forces besiege the English-ruled town of Angiers, threatening to attack unless its citizens support Arthur. The English contingent arrives. Philip and John stake their claims in front of Angiers' citizens, but to no avail, the town’s representative saying that they will support the rightful king, whomsoever that turns out to be.

Another Philip (this one known as ‘The Bastard’) proposes that England and France unite to punish the rebellious citizens of Angiers, at which point they propose an alternative: King Philip's son, Louis the Dauphin, should marry King John's niece Blanche, a scheme that gives John a stronger claim to the throne, while Louis gains territory for France. Subsequently, Louis and Blanche are married.

Cardinal Pandolf arrives from Rome bearing a formal accusation that John has disobeyed the Pope and appointed an archbishop contrary to his desires. John refuses to recant, whereupon he is excommunicated.

John promptly becomes a living host for the Whisperer in Darkness and proceeds to devour Prince Arthur. War breaks out and thirteenth century England and France die amidst blood and flames…

Mark Antony – one of the triumvirs of the Roman Republic, along with Octavius and Lepidus – has neglected his soldierly duties after being beguiled by Egypt's Queen, Cleopatra. He ignores Rome's domestic problems, and Octavius, seeking to become the sole Emperor of Rome, puts Lepidus in prison and dares Antony to fight him on the sea.

Antony, against the advice of all his advisers, accepts the dare. To ensure their victory in the battle to come, Anthony and Cleopatra make a pact with the ancient pharaoh Nyarlathotep, who has mysteriously returned from the dead, only to discover that he is in fact the malign deity known as the Crawling Chaos.

The ancient world dies in blood and flames…

5) The Merry Wives of Azathoth

Falstaff arrives in Windsor very short on cash. He improve his financial situation, he decides to court two wealthy married women, Mistress Ford and Mistress Page. He writes the women identical love letters and asks his servants – Pistol and Nym – to deliver them. When they refuse, Falstaff sacks them, and, in revenge, the men tell Ford and Page (the husbands of the wives in question) of Falstaff's intentions.

Page is not concerned, but the jealous Ford calls upon that amorphous blight of nethermost confusion which blasphemes and bubbles at the centre of all infinity – the boundless daemon sultan Azathoth, whose name no lips dare speak aloud, and who gnaws hungrily in inconceivable, unlighted chambers beyond time and space amidst the muffled, maddening beating of vile drums and the thin monotonous whine of accursed flutes – to thwart Falstaff’s plans.

Much hilarity ensues until all Windsor dies in blood and –

Anyway, you get the idea…

Jonathan Green is the editor of Shakespeare vs Cthulhu - which is available now! The official launch is taking place at London's Forbidden Planet on Saturday 13th August.

Imagine if it had been William Shakespeare, England’s greatest playwright, who had discovered the truth about the Great Old Ones and the cosmic entity we know as Cthulhu, rather than the American horror writer H P Lovecraft. Imagine if Stratford’s favourite son had been the one to learn of the dangers of seeking after forbidden knowledge and of the war waged between the Elder Gods in the Outer Darkness, and had passed on that message, to those with eyes to see it, through his plays and poetry… Welcome to the world of Shakespeare vs Cthulhu!