Hate by Peter Bagge, or, Buddy Bradley is You and Me 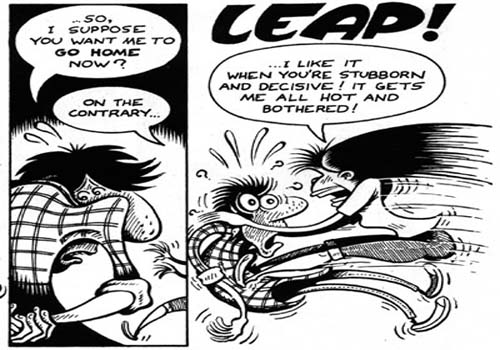 If the recent and successful relaunch of Archie Comics is any indication, it appears that the age of youthful cynicism is dead. While punk had a rebellious spirit, it was the grunge movement that solidified the apathetic and bleak outlook of the 90s MTV Generation X-ers, which might have faded before now had it not been swept up in the chain of catastrophes in the noughties. Optimism had no place in the world of 9/11, the War on Terror, natural disasters, climate change and financial crises instead fatalism and malaise carried on the grunge spirit of the previous decade. 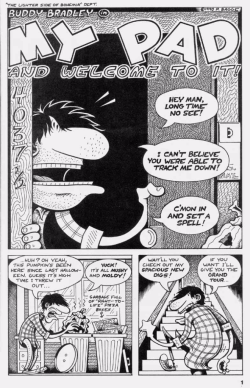 But now that Archie Andrews, America’s typical teen-ager is back on the comics scene in a big way (and soon to be on TV screens, too) it looks like cynicism may be dead. So perhaps it’s a good time to go back and look at one of the comics that helped mould the grunge movement; if you love cynicism, prepare for Hate comics.

Hate, written and drawn by Peter Bagge ran for 30 issues, starting in 1990 and running through most of the decade. Hate tells the story of Buddy Bradley, a 24-year old slacker who drifts from suburban New Jersey to Seattle after deciding California was a bit too far to go. While 24 puts him a little out of the teenage bracket, this is very much a coming-of-age story. Archie Andrews becomes Buddy Bradley and the hijinks of a sunny high-schooler become the real world problems we all face in our 20s. Getting a job, finding somewhere to live, having terrible flatmates, getting way too drunk.

Of course, it would be reductive to see Hate solely as a spoof of Archie. Bagge has stated that Hate is a semi-autobiographical account of his own life ten years earlier and so denies any real involvement with the grunge movement. (Keepin in mind that what an author thinks about his own work isn’t necessarily true.) In the early 90s Bagge was presenting a look at contemporary societal change. As he says in an interview at the start of one of the collected editions, "I would make up something outlandish [...] but someone would ALWAYS write to me and say 'I did that once'".

One of the big appeals of Bagge’s work is the recognisable and flawed nature of his characters. Unlike the squeaky-clean teens of Archie’s Riverdale, the assorted cast of Hate show all the arrogance, narcissism and neuroses of people we all know. Buddy, for starters, is in some ways the original hipster. He drinks only expensive beer from a local micro-brewery, he sees any popular music as lame despite once liking it himself ‘before it was cool’. In a way that is now condemned in modern comics, Bagge portrays the casual sexism and objectification of women that is common in day-to-day life both then and now. Women are ‘sluts’ or ‘crazy bitches’ and infidelity is de rigueur. Buddy is our hero in Hate, but no one is asking you to like him.

Rounding out the main cast are Buddy’s oldest friend Leonard (‘Stinky’ to his friends) and Buddy’s girls Valerie and Lisa, very much taking the places of Jughead, Veronica and Betty respectively. These characters are no better than Buddy in many ways, although they often act as foils to show up his flaws. Leonard is the quintessential roommate from hell; obnoxious, loud, with low standards of personal hygiene and even lower morals. Valerie, just like Archie’s Veronica, is the pretty rich girl, although, this being Hate comics, she despises her wealthy parents and defiantly works in a feminist bookstore. Lisa on the other hand is a jobless trainwreck, wracked with low self-esteem and angry self-confidence in turns. While it might be tempting to think that no such group of emotional misfits could really exist, one only has to watch a little reality TV to see that, once viewed without a sympathetic lens, people really are that crazy. 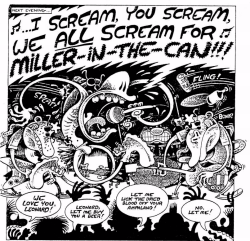 In fact one of the challenges of Bagge’s work is finding someone or something to like in it. Horrible characters, bleak plots and a fatalistic and depressing world-view: it would be easy to read about Buddy Bradley and come away horribly depressed as you see your own life reflected back at you. What saves the book from that is its humour. Hate reads almost like Friends written by Chris Morris. Arguments go from nought to nuclear in the space of a panel and to call the relationships in the series dysfunctional is an understatement. Not one for one-liners, the humour in the writing comes from the affectionate satirising of the slacker generation and on-point character traits. Buddy and Valerie's attempt to have a quiet dinner for two is straight out of a sitcom, but interruptions in the form of a naked Stinky trying to steal spaghetti and a depressed-cum-horny Lisa are purely Bagge.

But topping the written humour is the visual comedy in Bagge’s drawing. His figures can quite safely be called grotesque; backs are curved and bent, faces are stretched and features contorted to proportions occasionally reminiscent of Picasso. When Valerie drunkenly collapses at a party her body becomes totally boneless, limbs like tentacles in a heap and when Lisa rages her face grows to fill the panel, eyes and teeth becoming outrageously monstrous. Leonard’s nudity is humourous by dint of it being downright disgusting and when Lisa shaves her hair and dons a potato sack (don’t ask) she’s drawn so pathetically that it’s hard to know whether to laugh or cry. Bagge’s character artwork couldn’t be further from the upright teens of Archie, something which he plays up to by including classic comic style titles and formats, such as the one-page vignette titled ‘Hey Stinky’ or the chapter headed ‘Buddy Bradley in “Valerie’s Parents”’.

And despite their bad behaviour, their terrible habits and horrible attitudes - or perhaps because of them - you do start to feel a lot of affection for these characters. (Ok, maybe not Leonard, he’s just annoying.) Horrible dysfunctional screw-ups they may be, but they're your horrible dysfunctional screw-ups. I like the new Archie comics, it’s refreshing to have some light on the shelves, but in this new age of optimism, let’s not forget the slackers, the losers and freaks of the grunge movement from whom we can learn so much and enjoy so much uncomfortably familiar schadenfreude. But don’t take my word for it. Read Archie, then read Hate and then take a long hard look at your life; which one fits you best? Be honest now.

Hate by Peter Bagge, or, Buddy Bradley is You and Me

If the recent and successful relaunch of Archie Comics is any indication, it appears that the age of youthful cynicism is dead. While punk had a rebellious spirit, it was the grunge movement that solidified the apathetic and bleak outlook of the 90s MTV Generation X-ers, which might have faded before now had it not been swept up in the chain of catastrophes in the noughties. Optimism had no place in the world of 9/11, the War on Terror, natural disasters, climate change and financial crises instead fatalism and malaise carried on the grunge spirit of the previous decade.