Pornokitsch
Reviews Books Comics Film Fiction Index
Hate by Peter Bagge, or, Buddy Bradley is You and Me
Villain of the Month: Loki 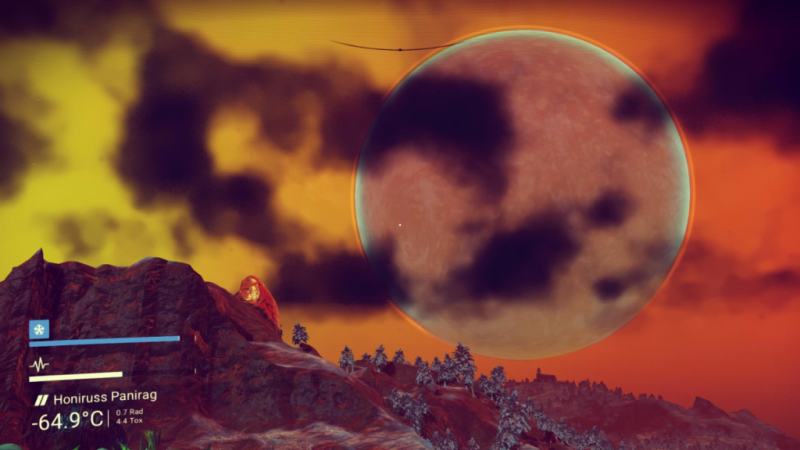 There’s something about the idea of walking somewhere that no one else ever has which connects to why I fell in love with sci-fi as a kid. The idea of walking alien soil, taking in bizarre vegetation and unknown, inexplicable wildlife appealed to me far more than the epic space battles or the jetpack and robot futurescapes. That moment of arrival; that sense of what have you got for me today, universe? Exploration for its own sake is at the heart of my sci-fi.

So No Man’s Sky is at the heart of my sci-fi. 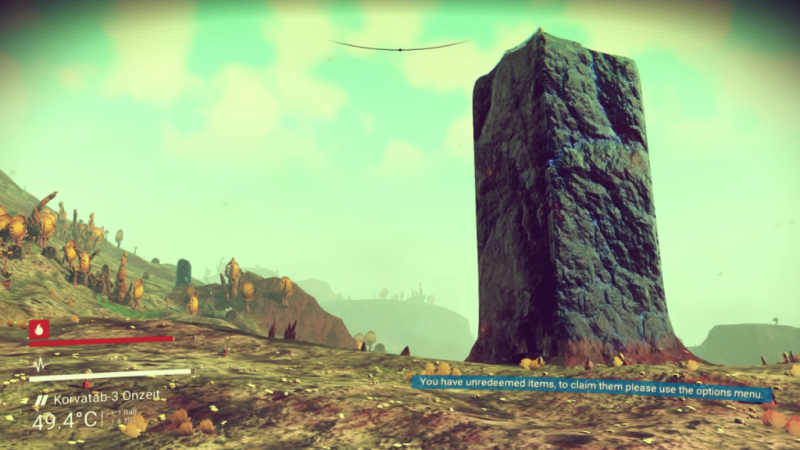 Ahead of the launch of this latest “little game that could” from developer Hello Games, I was happy to nerd-out to anyone and everyone about the maths. The procedurally-generated worlds that populate its universe are, to every practical intent, infinite in their variety.

The developers’ planet-generating algorithm is based on a 64-bit seed number - they famously upped it from 32-bit when people complained that the billions of planets that allowed didn’t feel like it lived up to their ‘infinite’ claim. With 64-bit there are potentially 18,446,744,073,709,551,616 – that’s over eighteen quintillion – different planets to be discovered. Or put another way, enough planets that if you spent one second on each, it would take you 585 billion years to visit them all. And unlike most game worlds, they're not pre-designed. The only restriction is the separate items in the planet-assembling toolkit, so every world is as fresh to the developers as is it to the player.

If only I’d known that the nerdy stuff was the least of what was going to impress me I might have been better prepared for it. I wasn't prepared. 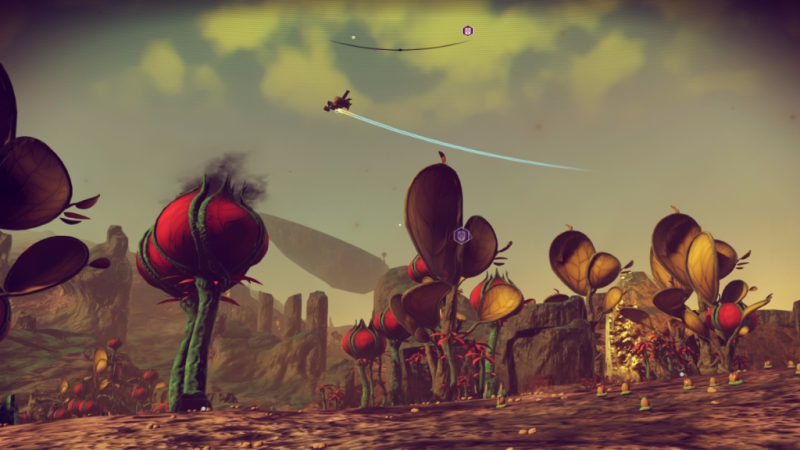 Because in No Man’s Sky, you’re not only able to walk where no one else has, you’re able to walk where there’s a better than reasonable chance that no one else ever will. And that’s (literally) awesome. The game somehow manages a fine line between making the universe feel populated - other ships cross the sky, NPC aliens occupy scattered outposts, occasional pirates will attack you for your cargo - while nevertheless stressing at every opportunity that you’re on your own. The odds of you physically encountering another player by chance are vanishingly small. When I saw a distant star system on my Galactic Map that had been discovered by someone else (hi, wolf_reign) it was an actual shock. The sense of scale, the feeling of being alone in an incomprehensibly vast universe, the inability even to imagine what exactly will come next - these are No Man’s Sky’s triumphs. Bitching about the quality of the textures should be the last thing on anyone’s mind.

Every planet has its own character, from its physical structure to its specific combination of minerals to be mined, to the sometimes literally incredible flora and fauna that populate it. And yes, to address one of the criticisms that occasionally surfaces in reviews and comments, some of the individual combinations end up a little similar, partly because there’s a limited set of components that can be randomly assembled, and partly because there have to be some standards that apply in order to make everything hang together in a consistent universe.

But believe me, every single new world, even the barren ones, reticks the ‘awesome’ box. I didn’t leave my starter world for an entire day, so constantly surprised was I by every single new thing I found; so determined was I to get the reward for discovering everything it had to offer.

I’ve managed to temper this urge a very little bit. My new rule is that I have to at least land on every world in a system I visit in order that I can officially discover and name each one and name the system.* I’ll only actively explore those worlds that seem interesting or offer something I need.

Which brings us to the actual 'game' component of the game. There’s a definite survival game aspect to the experience: planetary conditions might tax your exo-suit’s protective capabilities, you’ll need resources to power the suit and your ship, and not all the innumerable creatures will be friendly (never mind the mysterious electronic Sentinels, which take exception to your exploration). In the early stages especially you’ll constantly juggle resources you need with the space you have to carry them. Learning which elements do what, which to carry with you and which you can leave on the ship, and ultimately how to spot the telltale signs that a particular world will provide your needs is all part of the game’s curve.

Then there’s the ‘story’ component. No spoilers, but there are multiple ways to ‘progress’, to the extent that such a concept is relevant to a game like No Man’s Sky. As you explore you’ll find some pieces of a puzzle, be given others, and be led to yet more. These have me intrigued enough that I actually skipped through one system en route to a potential clue in another, too distant for a single warp jump. It was painful not to explore further, but I’m having to strike a balance if I’m ever going to get out of my own backyard. 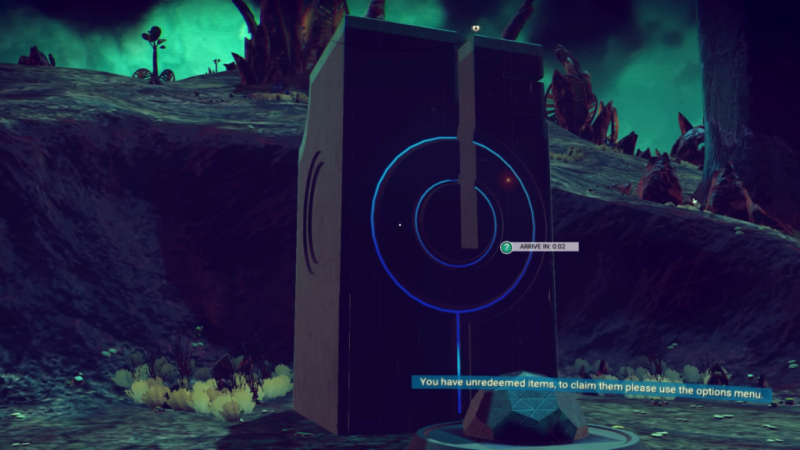 Even that you don’t have to do. There’s no timer, no deadline, and no easy to discern objective beyond the suggestion that the centre of the galaxy is a potential destination. If this is a sandbox, it’s the biggest sandbox in history. And one in which you can walk on an alien planet, enter your ship, blast off into space, warp to another star system, arrive, descend through the atmosphere of a new world, land and get out again, all without a loading screen or any other interruption to the experience.

No Man’s Sky rewards a lot of different approaches to game play, including the kind of mix and match that I’m currently attempting, between extensive and detailed exploration, a seemingly mystical quest, and the tantalising prospect of getting to The Centre. But what grabbed me from the first - and grabs me again every time it happens - is that moment when your ship’s canopy pops open and you step out onto a new planet that no one else has ever seen before and wonder what the universe has for you today.

* My starter system was called Parnassus and the planets are named for Muses. My second was named after Morlocks from the X-Men. What can I say? I'm a nerd of many flavours.

There’s something about the idea of walking somewhere that no one else ever has which connects to why I fell in love with sci-fi as a kid. The idea of walking alien soil, taking in bizarre vegetation and unknown, inexplicable wildlife appealed to me far more than the epic space battles or the jetpack and robot futurescapes. That moment of arrival; that sense of what have you got for me today, universe? Exploration for its own sake is at the heart of my sci-fi.

So No Man’s Sky is at the heart of my sci-fi.