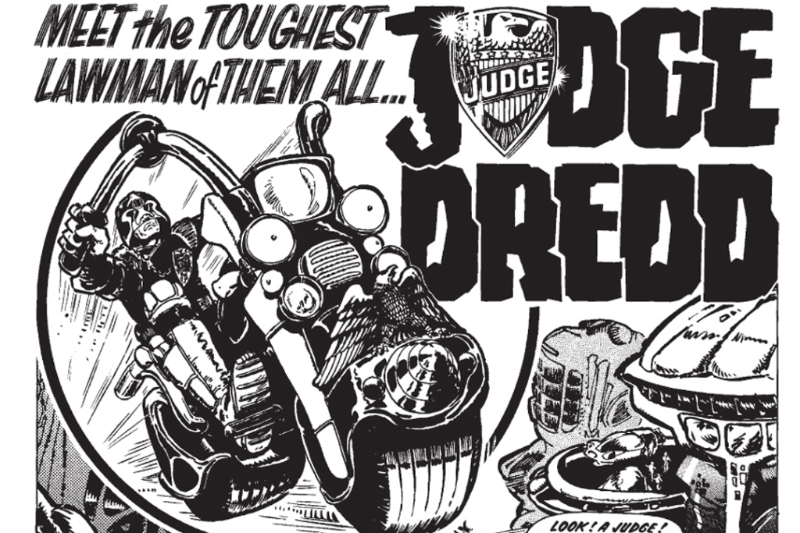 Now I’m a self confessed lefty-liberal type (admittedly I’m pretty vague on political terminology) so this is especially puzzling. Why does a violent, conservative-fascist type appeal to me so much? On the surface, Dredd and the entire concept of the Judges are symbols of a dark authoritarian future. Judge Dredd is without mercy. He's slavishly devoted to the rule of law and ruthless in the execution of his duty. And when I say execution, I mean it.

Judges not only enforce the law, but also sentence and, if needs be, execute lawbreakers. This has seen Dredd gunning down women, children (‘juves’) and, at one point, wiping out the entirety of the Soviet Mega City, East Meg One, killing 500 million people. But somehow this has done nothing to tarnish his appeal as a character - and not just with those that are attracted to dark anti-heroes like Punisher or Lobo. 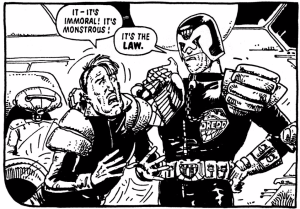 The comparison to the anti-heroes of the ‘80s and ‘90s is perhaps a good place to start when unpacking Dredd’s appeal. Although he was created in the late ‘70s in Great Britain, he shares many traits with those characters that came after and gained such popularity in the United States. Watchmen’s Rorschach, Punisher, and in some incarnations, Wolverine or Batman all share traits with Judge Dredd. They have a lack of mercy, hatred of crime and wrongdoing, a tendency to see the world in black and white, and are emotionless and with few ties of friendship or family. Punisher is arguably his closest analogue: a ruthless killer dispensing justice and killing bad guys without remorse or compromise. But something about Punisher has always left a bad taste in my mouth in a way Dredd never has.
The key difference could well be the world in which each operates. Mega-City One is a nightmare version of a future. It is so twisted that merely living in it can create a condition called ‘future shock’, causing ordinary citizens to lose their minds in a wave of violence. Punisher, however, exists ostensibly in the "real" world, and we know from living in it that the real world has much more grey than black and white. Another key difference is that Dredd - whether one agrees with the Judges or not - is an official law enforcement officer; Punisher is a vigilante. While Punisher is motivated by revenge and grief, Dredd is a man doing his job, dedicated to his duty in upholding justice. As he often says: ‘I AM THE LAW’.

This brings me on to another possible part of the appeal of Judge Dredd.  Like the Jedi, Judges can know no love, have no family and generally live monastic lives. There’s a purity to Judge Dredd; Judges are (theoretically) above corruption and vice and Dredd is more incorruptible than anyone. In a world as crazy as the world of Mega-City One, Dredd is the constant, the pole star, the rock. This might just be my daddy issues talking, but there’s something solid and distant about Dredd that gives him an air of paternal reassurance. In the same way fathers are emblematic of safety and security, Dredd’s presence lets you know that everything will be alright. 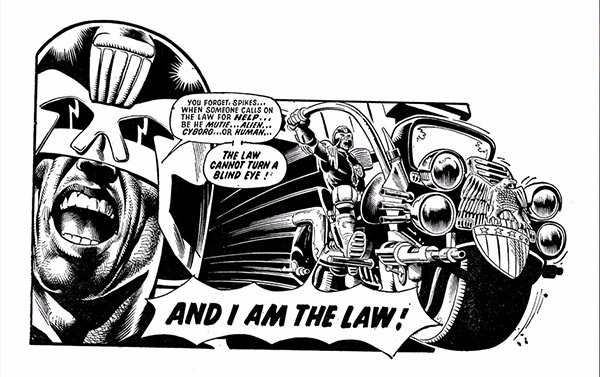 By elevating him away from family and friends (he’s a clone too, so he doesn’t even have something as pathetically human as parents to tie him down) Dredd becomes something both less and more than human. His assurance that ‘[he] is the law’, and his position at the forefront of law enforcement in the Mega-Cit encourages readers to see Dredd as a superhuman or preternatural force of justice. Like the furies or Nemesis from Greek mythology, representing vengeance and retribution respectively, Dredd is a physical embodiment or anthropomorphic representation of a concept: the concept of law.  He is beyond human concerns and this too can have an appeal of its own. Take the different approaches toward superheroes taken by Marvel and DC. While Marvel purport to present regular people with powers, DC’s superheroes have always been closer to gods in their presentation and iconography. Dredd is treated as, and has the attitude of, a godlike being - so he can appeal to those looking for stories of the truly superhuman. But at the same time he’s much closer to humanity in terms of his powers, abilities and limitations. Who is the other prominent character in comics who best fits this description? Batman. And I don’t need to tell you how popular Batman is.

But Judge Dredd isn’t merely a cold avatar of the law or an emotionless robot. Joe Dredd is a clone of the founder of the Judge system, the so-called ‘Father of Justice’, Judge Fargo. He was literally purpose-built to be a Judge and uphold the law. In lesser hands, this could easily lead to the duty vs. free will narrative but the 2000 AD scribes haven’t been swept into this path. Dredd does uphold the law and he places duty above all, but sometimes, somehow, a little humanity manages to slip through. His almost begrudging quasi-friendships with his fellow Judges, such as Anderson, Hershey or Giant, show that he can form emotional ties no matter how he tries to deny them.

Dredd also suffers the occasional crisis of confidence or uncertainty, like the time he took the Long Walk into the Cursed Earth (a form of exile which is the only way a Judge can retire) during the story ‘Tale of the Dead Man’.  And very, very occasionally, Dredd isn’t without mercy. Take the example of Chopper, for instance. Chopper was a juve graffiti artist turned sky-surfer who repeatedly crossed paths with Dredd until, at the climax of the ‘Oz’ storyline, Dredd hesitates on a clear shot allowing Chopper to fly off to freedom. These occasional slices of self-doubt, friendship or clemency allow the reader to remember that Dredd, although he may not show it for years at a time, does have feelings deep inside.  The fact that his helmet hides most of his face is a visual reminder of this trait. It masks most of his expressions and only gives hints of his emotions.

Dredd has the ruthlessness and lack of compromise so admired in the dark anti-heroes of the ‘80s and ‘90s, but without the difficult philosophical arguments about the morality of vigilantism, and also devoid of the emotional baggage. He combines the godlike status of DC’s best and brightest, while retaining his humanity, a few emotional ties and hints of human vulnerability. Dredd is a character who speaks more with actions than with words, which, even in a visual medium like comics, is quite rare.  Readers know he has cares and fears, but that he puts duty first and carries on regardless. Dredd is also a paternal figure: one that will keep you safe in an unsafe world, and and who provides sanity in an insane one.

Unless you’ve committed a crime, of course, in which case... you’re in trouble. And there’s no point trying to hide it; he’ll know. You can’t run from the law - it’s the iso-cubes for you. Creep.