Alice’s Wild West Show was released in May 1924 which makes it ninety-two years old! Ninety-two! I stumbled across it the other day, and couldn’t let it pass without a few (hundred) words, mostly because it’s given me a whole new world of Western gifs. Begone, shifty-eyed Leones! I have Alice now: 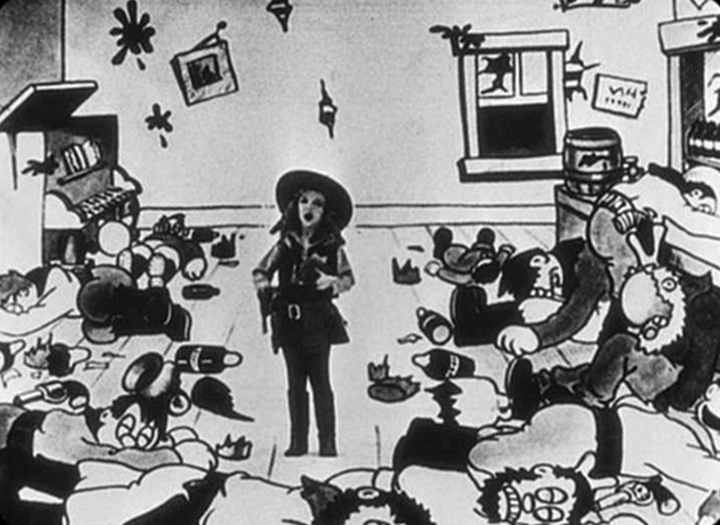 A bit of background if you’ve never heard of the Alice series: they’re some of Walt Disney’s earliest work, pre-Oswald the rabbit, and quite a few years pre-Mickey Mouse. He started shooting them as a fresh-faced animator, champing at the bit in Kansas City. When his first small studio, Laugh-o-Gram, went bust, he sold his camera, bought a train ticket and hot-footed it out West, an unusual move at a time when the animation industry was mostly based in New York. So far, so Western, right?

After setting up shop in his uncle’s garage, Walt sold six Alice films to Margaret J. Winkler: the first woman to produce and distribute animated films. At the start of her collaboration with Disney she was pretty firm, and insisted on editing the Alice films herself. Winkler is actually responsible for the presence of barroom scene in Alice’s Wild West Show, which otherwise would’ve been left on the cutting room floor.

So there’s ya background. Let’s move on to: 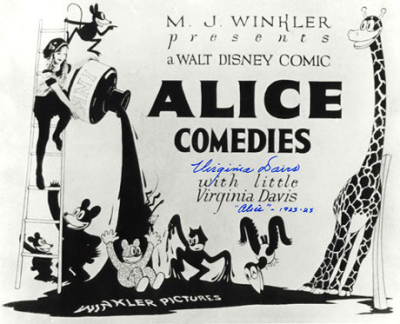 All too often child actors – especially ones from early cinema – can be weird, lady-in-the-radiator-style, “cuties” but not Virginia Davis. She’s brilliant! Throughout the film she has great character and physicality; especially in the animation sequences, considering she was acting against invisible characters and scenes. She was only six at the time, but was so good in the role the Winkler insisted she star in the films, leaving Walt to persuade Davis’ parents to relocate from Kansas City to California.

“One of my favorite pictures was Alice's Wild West Show,” Davis once recalled. “I was always the kid with the curls, but I was really a tomboy, and that picture allowed me to act tough. I took great joy in that.”

Alice’s Wild West Show is probably the most visually striking of all the Alice films. It’s no surprise that articles about them are usually illustrated with a picture of Virginia Davis dressed up in cowboy gear, boots, gun-belt and all. On the subject of which: what film now would have little girl disappearing into a fantasy cartoon world to play the sheriff, where she puffs away on a cigar, blows smoke rings, shoots up a saloon and foils a bank robbery to walk away with the money herself?

Throughout his career, Disney seemed to have a knack for taking popular forms and shifting them subtly but effectively. Much of the appeal of Alice’s Wild West Show – then and now – is that it places Wild West stories, which were considered entertainment for boys at the time, in the hands of a girl. And far more than just a gimmick, we end up with a character who drives the film through her actions: the Wild West show is her show, she is the ringleader, the director, the entrepreneur, the narrator, the protagonist of the adventures.

Alice’s Wild West Show is the third of six original Alice films, and the fact that Disney chose the Wild West as an early theme is telling in itself. In their day, Wild West Shows were a highly popular entertainment form that – like cartoons – blurred art and life, fact and fiction. The Wild West Show presented a domesticated, mythologised, unreal version of the West: where desperate men and killers became larger-than-life caricatures, there to entertain.

Likewise, in Alice’s Wild West Show we see fantasy clashing with reality; Wild Bill Hicock is reimagined as “Wild Bill Hiccup”. Visual jokes and twists on real life abound. In the barroom scenes, signs declare: NO SHOOTING ALOUD, NEER BEER and EVERYBODY GIT DRUNK. In the animated sequence, the safe that Wild Bill attempts to steal is made by the “Unsafe Safe Co.”, and hanging behind him is a framed picture bearing the words: HOME WAS NEVER LIKE THIS.

Violence too is often part of the fantastical appeal of the West, where characters shoot each other with impunity. Early cartoons were frequently rather casually sadistic, made palatable by the unreal nature of the setting (Who Framed Roger Rabbit being the perfect riff on this concept) and Alice’s Wild West Show is no exception. In the second of the animated scenes, a saloon brawl devolves into a shootout that leaves all but Alice ­– and her dog sidekick – dead. “Darn!” she mimes, swiping her gun, before running out to catch Wild Bill.

Tonally, yes, it might make the film – ostensibly a cute little story about a girl putting on a show – a bit odd to modern audiences, but hell, at least it makes it interesting. I have a feeling that a few years down the line, post 1930 and the Hays Code, this wouldn’t have made it past the censors.

Since we’re dealing with a Western from the 1920s, there’s the usual raft of racial stereotypes to contend with. In Alice’s Wild West Show that means – unsurprisingly – a host of identical, loin-cloth clad “Injuns” with feathers on their heads, attacking a stagecoach with bows and arrows. We also see the same-old same-old stereotyping of larger kid “Tubby O’Brien” as the bully, accompanied by a standard-issue “prissy” kid with glasses.

The presence of Alice’s animated dog friend is an odd one too. Story goes that Margaret Winkler was keen for Disney to get in as many visual gags as possible; in other Alice films that job is filled by a blatant rip-off of Felix the Cat called Julius. (Literally, Winkler told Disney to copy Felix). In Alice’s Wild West Show, the dog character is one of the pieces of animation that lets the film down. In other areas though – such as the opening chase scene – the interaction between live-action Alice and animated world works well, regardless of the occasionally clunky style.

The early Alice films tend to divide Disney fans, mostly because there’s not actually a huge amount of animation. Alice’s Wild West Show is split pretty evenly between live action and cartoon. While a lot of that is due to the fact Walt was shooting everything behind a garage and had pretty much no cash, to me, it’s what gives this particular film its unique appeal. By the end of the Alice series (fifty-seven in all) Alice herself appears only as a sort of bookend to the animation. What’s so charming and fun about Alice’s Wild West Show is the presence of Alice as a storyteller, along with her bunch of friends and rivals. In fact, the entire cast is made of up children, something undoubtedly inspired by Hal Roach’s Our Gang series; the first of which was released two years previously. Virginia Davis commented that: “having other children in it made it great”.

With my Western Reviewing hat on, Alice’s Wild West Show is fascinating for another reason. Time and again I keep coming across filmmakers who explored the Western genre at early points in their careers; look at Jack Nicholson and Monte Hellman, Jodorowsky, animator Bruno Bozzetto, even Edgar Wright (yes, that Edgar Wright: more on this later). It seems that, though an unlikely candidate, Disney was no exception to this rule*, drawn to the Western for its striking visuals, its rich landscapes, and its promises of excitement and danger.

As a side note: while I was doing a bit of digging about the Alice series I discovered that there are RICH pickings online in the general area of Disney conspiracy theories, including whole books with titles like The Disney Fetish and Bloodlines of the Illuminati. I clicked on some of them so am now probably being monitored by an underground network of anti-Disney-conspirators.