If Gomez-Alonso’s speculation has any truth to it, vampirism is one of the earliest, and most influential, influences of parasite ecology on speculative fiction. But it’s far from unique. Since Dracula, parasites have been a steady source of inspiration of speculative fiction authors, especially in horror and scifi. Parasite ecology served as a catalogue of body horror grotesques for scifi B-movies. Many-toothed maws, mucilaginous worms crawling into orifices, and the skin-splitting chest-bursting emergence--and of course the perennial favorite, mind control--all made for great posters and memorable effects sequences. 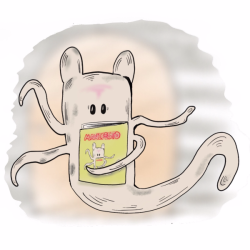 That lurid, sensational approach has, however, curated a pretty limited palette for painting parasites, a palette that has shades of gross, hideous, terrifying, and the ceaseless urge to kill humans. Parasite actors can expect to be typecast into one of three well-established roles: the avatar of plague and death (a la Nosferatu); the ravenous monster with a limitless appetite for human flesh (like Alien’s Xenomorph); and the mind-controlling worm bent on world domination (eg Animorphs’ Yeerks).

On the other hand, the recent movement toward gritty realism in fantasy has been constantly hectored about its failure to depict the prevalence of everyday diseases like dysentery in medieval life. This has always struck me as a bit unfair - there are, after all, dozens of vastly important elements of historical causality and daily life that authors habitually neglect. It is, I think, a consequence of the distinction we draw between “parasites” and “diseases” - the former large, wiggly and usually chitinous, the latter invisible, detectable only by symptomatic cough, fever, or flux. This is a colloquial misconception; they are all parasites, ecologically speaking: they spend much of their life cycles feeding inside their host’s body.

Parasitism as a lifestyle spans the whole gamut, from whale-gut tapeworms to the brain-eating neti pot amoeba all the way down to the sub-viral-sized prions you catch when you eat too many human brains. Yet in fiction, macro-scale parasites have agency and imaginative flavor (even if that agency is restricted to willing a grotesque death to humans). Microbial parasites, on the other hand, are handled more like a status ailment than organisms, rarely taken as an opportunity to enrich the story world with wondrous and fateful creatures. 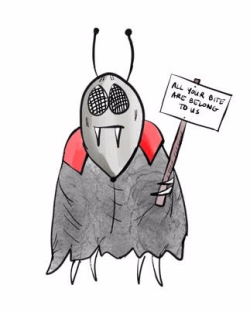 Despite a century of mining parasite ecology for inspiration, speculative fiction has barely scratched the surface on what parasites have to offer. This was, for a while, an error of ignorance - ecology has only recently discovered the scope of what parasitic organisms do in ecosystems. Because parasitism is an unusually efficient lifestyle (hard to be more of a couch potato than living inside your food), parasites have undergone an astonishing diversification into a huge array of bizarre and particular niches. Many dramatically alter host sexual biology and behavior, or cause monstrous disfiguration. Others migrate between several very different hosts, transforming beyond recognition each time. There are even parasites that feed only on other parasites. These are some of the most peculiar stories in ecology, still an untapped well of inspiration for fantasists.

Parasitism is only one form of symbiosis, and defining a symbiont as a parasite depends on a negative effect that in some cases can be quite hard to prove. The human gut microbiome is the leading edge of the cultural rehabilitation of microbial symbionts, popularizing the idea that human health depends on “good germs” to exclude pathogens. Yet it’s somewhat misleading to categorize symbionts even at the species level. Ed Yong explains this eloquently:

In reality, bacteria exist along a continuum of lifestyles. If they do us harm, we describe them as parasites or pathogens. If they exist neutrally, we call them commensals. If they benefit us, we bill them as mutualists. But these are hardly fixed categories. Some microbes can slide from one end of this parasite-mutualist spectrum to the other, depending on the strain and on the host they find themselves in. . . . All of this means that labels like mutualist, commensal, pathogen or parasite don’t work as definitive badges of identity. These terms are more like states of being, like hungry or awake or alive, or behaviours like cooperating or fighting. They are adjectives and verbs rather than nouns. They describe how two partners relate to one another at a given time and place.

This ecological contingency may not be necessary for a simple slasher film, but it introduces a sort of nuance that dovetails beautifully with the current wave of post-Grimdark epic fantasy. Following Martin, this trend derives much of its MO from history, following characters through the machinations of complex social and magical systems. This historical approach also rectifies the tendency to present parasites as sudden, ahistorical intrusions. It’s typical to make such parasites “alien” even when there’s no clear reason to do so. The problem is that parasites aren’t aberrant - their absence is. Parasites are everywhere, and their life cycles structure practically everything about life on our planet - they are, almost inevitably, deeply woven into the patterns of power and influence epic fantasy is increasingly interested in depicting. 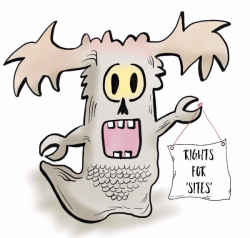 Though small individually, parasites often equal predators in terms of total biomass. And they’re arguably far more influential. Parasites thread together major links in the ecosystem. That predators tend to kill the old and sick among their prey is a pattern I’ve heard so many times that it never occurred to me to question it. But when you learn that it’s rather common for parasites to require time in the body of the predator and the prey (cat and mouse; bird and fish; mantis and mayfly), that they would engage in sinister biochemical puppeteering seems inevitable.

Indeed, there is plenty of evidence that many parasites endanger their hosts not just by weakening them, but by directing them to particular situations in which they’re likely to be eaten by the parasite’s next host. Science journalism loves to term these interactions “zombification,” but mirroring that back to speculative fiction is a travesty of unimaginativeness. There’s so much potential here! After all, up to 50% of the human population may have Toxoplasma, a parasite that has been tentatively shown to alter personality, motor skills, and suicide risk in humans, but that doesn’t make us mindless. 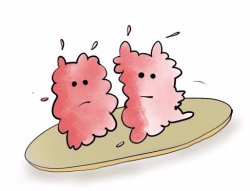 Of all the weird things about parasite ecology, sex and reproduction are probably the most compelling. In order to favor investment in their goals over host reproduction, parasites often chemically castrate their hosts. Some parasites co-opt the host’s reproductive system more directly, like the barnacle that makes male crabs inject its eggs instead of sperm - which are then cared for by the female as if they were her babies - an astonishingly direct mirror of the changeling baby trope, given how recently this phenomenon was documented. In social insects, parasitic castration changes how individuals relate to their nestmates, enabling social mobility and creating novel sex roles.

These processes can be brutal, and they’re often a total loss for host animals, but we now take a more enthusiastic view to sexual nonconformity. As long as we’re careful to avoid using parasitism to convey monstrousness in the execution, I think they could inspire a whole world of imaginative queer worldbuilding. Personally I’m hoping for a domestic drama about a nest of paper wasps living through the changing social and reproductive roles imposed on them by the flies in their abdomens.

A few works have started integrating a broader, more naturalistic perspective on parasite ecology into fantasy. Mushishi, the gold standard in fantasy ecology, is premised on creating dozens of these little life cycles, half natural history and half folkloric fancy. In a sense, I wrote this piece because I want to see more things like Mushishi. There’s also a message and an opportunity here. Despite their importance as architects of ecosystems, parasites are neglected and even denigrated as targets of conservation. When endangered animals are bred in captivity and reintroduced to the wild, their parasites are often killed as a matter of course, seen not as a part of their host’s ecosystem role but a hindrance to it. While it’s not fair to blame speculative fiction entirely for this image problem, it certainly hasn’t helped. But it could. A few good stories with empathetic and compelling portrayals of parasites could make a world of difference in the conservation of real parasites and the ecosystems they structure.

Adam Kranz is a graduate student in insect ecology at the University of Illinois Urbana-Champaign. He writes about fantasy, games, postmodernism, and environmental history.

Does your iPhone need more parasites? You can find them in the iTunes store.