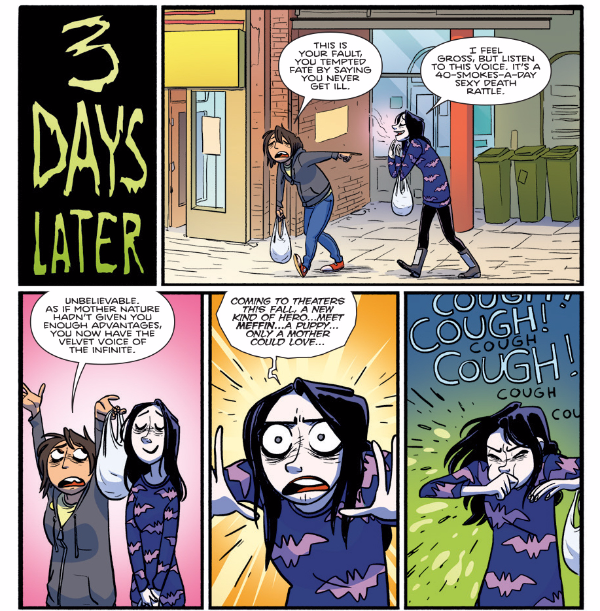 As the comics market matured, the desire for original art pieces and the practice of including supplementary material like writer’s scripts in comics or graphic novels allowed fans to see exactly how the sausage was made. An excellent recent example of our ability to trace the organic growth of a concept over different iterations is the series Giant Days, originally created, written and drawn by John Allison and later drawn by Lissa Treiman for the first six issues of its current run being published by Boom!.

Giant Days was first published in 2011. A small press spinoff of the ongoing webcomic Scary Go Round, Allison created Giant Days during a crisis of confidence after ending Scary Go Round proper and beginning its now successor, the supernatural teen detective series Bad Machinery. However, the actual creation of some of the characters featured in the original three issues of Giant Days goes back many years earlier. Esther de Groot, for instance, first appeared, unnamed, way back in September 2004 as an angry goth gatekeeper type.

Five months later, Esther got a name in a strip from January 2005 and from there she appeared with increasing frequency as unlikely love interest to Eustace ‘The Boy’ Boyce. From those early appearances both Esther’s character and Allison’s art style have developed immensely. The early Scary Go Round, while showing all the weird promise of Allison’s later work, was undeniably... rough around the edges. 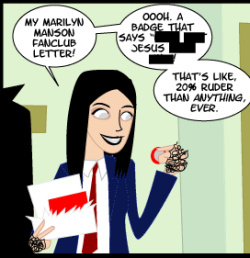 By the time Scary Go Round ends, Esther and The Boy have gone from occasional subplot to full on supporting characters. It makes sense, therefore, that Esther would be considered for the breakout spinoff treatment. Like so many spinoffs, however, a popular character, change of location and new supporting cast doesn’t necessarily make a surefire hit.

Unfortunately Allison falls into the classic trap of the TV spinoff: Esther is the star and the rest of the cast don’t really have much to do. Having worked on/with Esther for so long it’s understandable that Allison sticks with her as a comfortable and known quantity, but keeping the focus on Esther leaves the stories imbalanced. While Esther uses her immense boxing skills to take down a coven of prefects and almost gets inducted into a black metal cult, Susan and Daisy are left with the rather more mundane stories of joining Indie Soc or going jogging, talking about Esther all the while.

There’s still plenty to enjoy in these early issues, not least the fact that Allison’s art style has by this time vastly improved over his work of nearly a decade earlier. The first issue is presented, I expect because of printing costs, in blue scale. The artwork is still quite spiky and has a scruffy, sketchy quality. By the third issue of Giant Days the artwork has already become smoother and rounder and the choice to go full colour gives the stories a greater range of expression and brings the characters more fully to life. Fast forward three years - and, I'm sure, a lot of networking, stressful meetings and planning - and Giant Days is put out as a monthly comic book by Boom! publishers. Allison retains writing duties and is joined for the initial run by Lissa Treiman illustrating, with Whitney Cogar and Jim Campbell on colours and letters respectively. Allison makes the brave choice to keep his original, self-published (and largely unavailable) works totally in continuity with a one page flashback catching readers up. 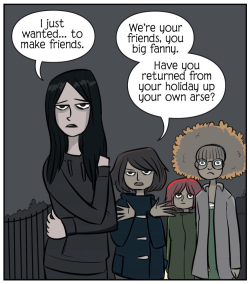 While this makes sense in some ways, there is a definite tonal shift in the series. Allison moves away from some of the more supernatural or surreal elements of his early issues and focuses instead on something closer to Channel 4's Fresh Meat, but with fewer jokes about masturbation. The drinking and smoking may have also been toned down (understandably for a mainstream U.S. comic book) but this doesn't damage Allison's ability to accurately represent uni life. In fact, if there's anyone better at writing realistic young men and women in comics, I haven't seen them. Allison also manages to iron out the early character imbalance by giving Susan and Daisy convincing and interesting plots of their own and shifting Esther's role down to an equal level. Susan’s fight against ‘lad’ culture and Daisy’s experiences with drug use are particular highlights.

The real sea change is the addition of other creators into what had until now been Allison's solo project. Lissa Treiman's artwork is larger and more open than Allison's, with big eyes and expressive, mobile faces that are appropriate for an artist that had previously worked in Disney animation. Extra humour is added with expansive, over the top faces and bodies, warping and growing to exaggerate emotions when needed.

The colouring and lettering, too, add to the humour of the title. When Daisy takes some pills in a club the colours take on a psychedelic rainbow quality and when the characters all catch freshers' flu a snotty '3 Days Later' really succinctly captures the onset of a phlegmy cold.

While Allison’s writing is full of all the snark and sarcasm you’d want from a Britteen drama, Treiman’s art adds a more innocent, cartoony air that balances out the humour of the book.

Giant Days is very much the little series that could. A spinoff title for a secondary character from a web comic which, while popular, isn't one of the ones that many people have heard of, especially back in 2004. About half a decade later, Giant Days was born only as a backup in case Bad Machinery flopped and almost never saw the light of day at all.

Even when it was picked up by Boom!, Giant Days was only planned as a miniseries. But due to the popularity of its first issues, the series was extended and then finally made a ongoing title. Its popularity is a testament to the skills of those who work on it, because who on earth would have thought that a monthly comic book about the goings on at a small English university would ever be a big hit? But it is.

It was by returning to this concept as his skills as a writer and artist grew that Allison made this series work and finding the right people to collaborate on it with him that made it a success. Which goes to show, I guess, that no one knows where the next big hit might come from; maybe it's time you dusted off that old story or script that's been sitting at the back of a cupboard for years and give it another go, after all, there could be giant days ahead.

P.S. Many thanks to the people at the Tackleford Wikia, without which this article would have taken much longer to research.