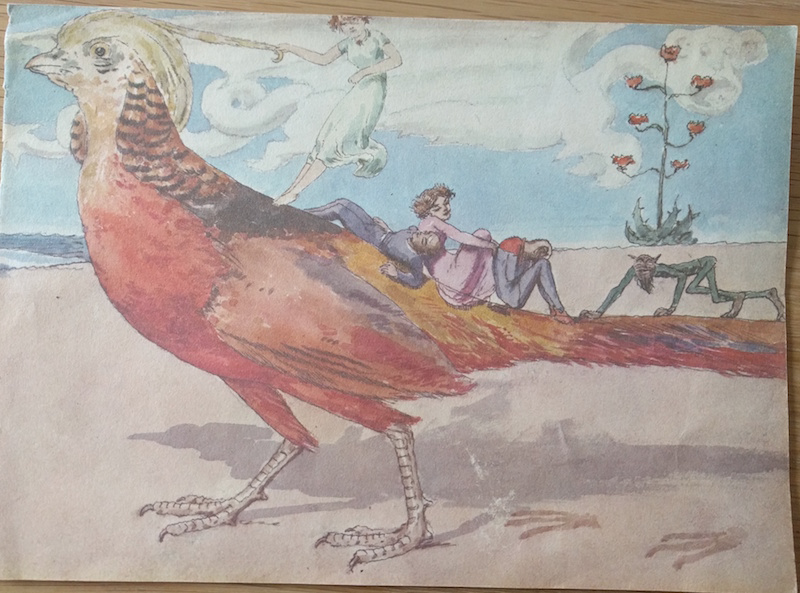 Thanks to the magic of image searching, we learned that this prime piece of weirdness is actually a drawing by Charles Altamont Doyle - father of Sir Arthur Conan Doyle, who wrote Sherlock Holmes (well, originally, before the internet decided that he got it wrong and added in more sex and Cthulhu monsters).

A very handy piece on the "mystery" of Charles Doyle, over on the blog of artist Vladimir Zimakov. Zimakov found a reprint of Doyle Senior's sketchbook (which contains UR-PHEASANT) and writes about it:

The drawings and writings in the journal were created in the late 19th century while Charles was a patient of “Sunnyside”, a part of the Montrose Royal Lunatic Asylum in Scotland. Epileptic and ailing, he would spend the rest of his days in asylums. After Charles’s death, the journal was lost and discovered only in 1975. It features truly exquisite watercolor sketches, cartoons, curious observations, allegories and puns. Here is the introduction to the journal: “Keep steadily in view that this Book is ascribed wholly to the produce of a MADMAN. Whereabouts would you say was the deficiency of Intellect? or deprived taste? If in the whole Book you can find a single evidence of either, mark it and record it against me.”

Our print is (yet another) mystery for the pile. It does seem torn out of a book, so I'm assuming this is from the 1978 reprint of of Doyle's library. However, the landscape on the back doesn't seem to be in the book (at least, in any of the illustrations Zimakov shares). I think it is actually a sketch-sketch - not by Doyle, of course - but by someone drawing on the back of ... this earlier print? I have no idea. Our copy of the sketchbook reprint is on its way. Will report back then.

Anyway, I'll confess I had no idea that Arthur Conan Doyle's father was an artist - or that he apparently illustrated an edition of A Study in Scarlet - you can find some of the artwork here.