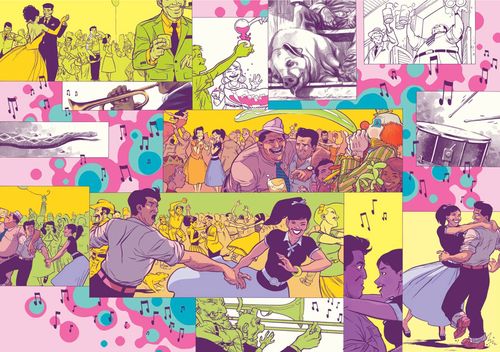 Pérez was born in the 1970s to immigrant parents in southern Ontario and worked in comics and as a cartoonist in such diverse fields as advertising, children’s books and role playing games for some years before really making a splash in the comics world with his adaptation of Tale of Sand.

Published by Archaia shortly before it was bought by Boom!, Tale of Sand is the realization in graphic novel form of a never-filmed screenplay by Muppets creator and all-round nice guy/legend Jim Henson and long-time collaborator Jerry Juhl.  Those who know Henson purely for his Muppet work may be surprised by the metaphysical and philosophical nature of Tale of Sand, a story which Pérez himself described as “a Rorschach test” in which anyone can read their own interpretation. To try to describe the plot is almost impossible, but it involves a man on a mad, dream-like and deeply symbolic quest across the desert, complete with car chases, hot blondes, psychotic jocks and murderous Arabs.

In order to bring to life this strange and oneiric story, Pérez uses two very different art styles.  In the main his characters and settings are rendered with thick, clear lines and bold, flat colours.  This style, so redolent of the French ligne claire made famous by Hergé, really makes characters pop off the page.  The bold colours (a team effort between Pérez and colourist Ian Herring), largely reds, yellows and purples, give the whole book an otherworldly feel.  These are the colours of a desert sunset, but instead of peaceful, they are dialled up and made challenging. 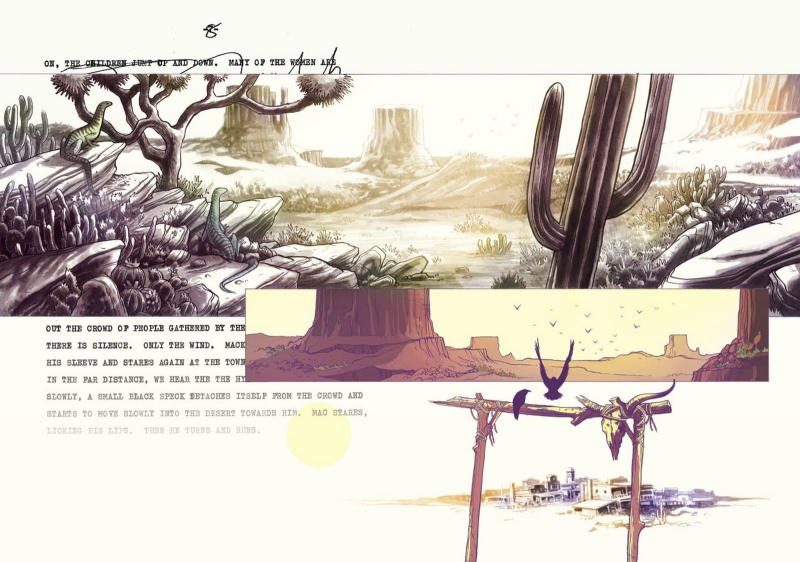 However, against this bright, clear style, Pérez juxtaposes delicate watercolours, used sparingly but effectively throughout the book. These watercolour sections are generally finished in purple washes and appear far calmer and introspective than the more in-your-face clarity of ligne claire. This calmness is cleverly played against type, however, as it is used to present things uncomfortable or threatening; a snake, the endless desert, our hero’s nemesis, Patch, all things which sneak up on the reader under the guise of pleasing, undramatic watercolours. One particularly nice use of blended styles is a page in which a watercolour limousine pulls up and out pops a clear and boldly rendered lion, an unexpected occurrence using an unexpected art style.

While Tale of Sand uses watercolours intermittently throughout to highlight, contrast or to create breathing space, it is in Pérez’s run on Marvel’s Hawkeye that his use of opposing styles is really employed to its full.  Collaborating with fellow Canadian, Jeff Lemire, and Ian Herring again joining in with colour work, Pérez completed eleven issues of the series following on from the smash hit run by Matt Fraction, David Aja and Kelly Wu. 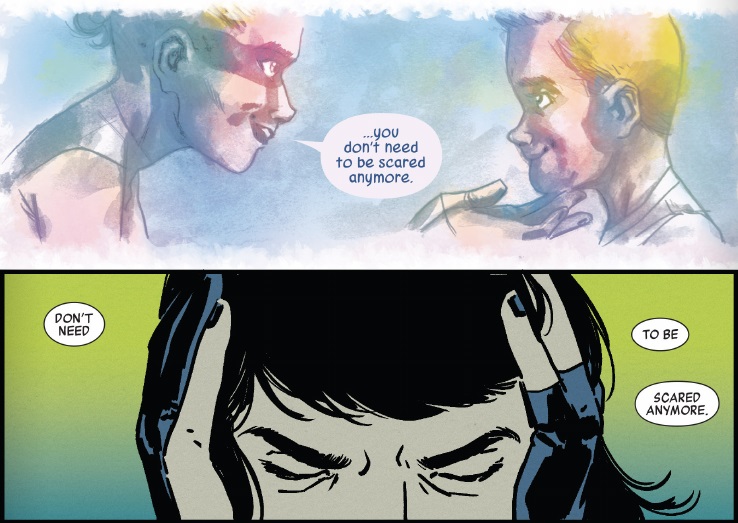 These issues use a dual narrative which juxtaposes a story of the Hawkeyes, Clint Barton and Kate Bishop, attempting to save three super-powered children against stories from the childhoods of Barton and Bishop themselves. The entire arc deals with the consequences of childhood abuse and disillusionment, with the Hawkeyes’ current struggle to rescue children driven by their own childhood traumas. Both Barton and Bishop were failed by adults, parents and idols as children and their attempts to save other children from a similar fate is complicated by their own ongoing issues. By combining two art styles the thematic relationship between the two plots can be played out on one page without muddying or muddling the integrity of either strand of the story. 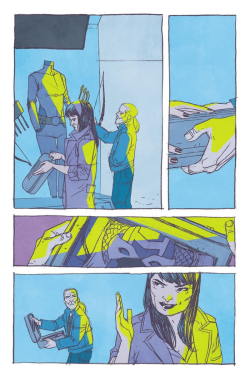 For the present day parts of this story, Pérez uses a more kinetic and sketchy version of his ligne claire style. By making his lines scratchier and less polished the art becomes, appropriately for a superhero comic, more frenetic and spontaneous. Alongside this story, Pérez employs his watercolours for the flashback tales, the first of which follows Clint and his brother Barney as they flee their abusive foster-father and join the morally murky world of the circus. Watercolours are an apt choice for the hazy, mutable nature of memory and the choice to use predominantly purples (very much Hawkeye’s colour) and blues evoke something otherworldly and half-forgotten. During moments of violence disturbing bloody splotches of red seep into the panels and so Pérez’s watercolours retain the sense of threat they had in Tale of Sand.

During his time on Hawkeye, Pérez actually uses a third style for a portion of the story that consists of a flash-forward to a long-estranged Clint Barton and Kate Bishop. In the future sequences the art becomes sketchier than it is in the present day: bodies and faces are not so clearly realized, linework is thinner and more disjointed and the colours are paler, flatter and less complex. Not content to merely draw the past or future, Pérez changes his technique to evoke the metaphoric and literal qualities of the future, past and present: the future is both narratively and artistically uncertain, just as his watercolour past is hazy and unclear while the present is comparatively stable and clear.

Mixing different styles and techniques makes the eye and mind work harder when looking at a page and leads to a richer reading experience. If this were all Pérez were doing he would still be a great cartoonist and well worth a look, but he’s employing his techniques for so much more. In Tale of Sand the multiple styles heighten the dreamlike aspects of the story and create a sense of unease and threat.  In Hawkeye, different styles are used to a greater extent, interweaving multiple time periods and commenting on the nature of consequence, memory and time.  It’s this kind of work that demonstrates just what’s so good about the comics medium: not only the narrative, the dialogue, the layouts, the colours and the pencils help tell a story, but even the technique the artist chooses to use can add so much to our understanding and enjoyment.