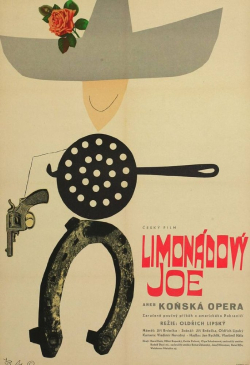 A bit of history first: Lemonade Joe, or The Horse Opera (Limonádový Joe aneb Koňská opera) was originally created by satirist Jiří Brdečka in the 1940s, as a parody of the Western epics and dime novels that had been popular pre-Stalin. As is often the case with parodies, Brdečka actually loved Westerns, and even wrote a non-fiction book about historical figures of the American frontier.

Before being made into a film, the Lemonade Joe stories were turned a stage play, which went on to inspire a stop-motion film (Song of the Prairie, 1949) and two other animated shorts from Soviet-occupied countries: the fairly sinister Cowboy Jimmie (former Yugoslavia, 1956) and the wonderful Mały Western (1961) by Polish master animator Witold Giersz.

ALL of which make for fascinating viewing, by the way. In fact, who wants to pay for me to do a PhD in cross-cultural animated Westerns of the 1960s? Anyone? No? Fine. Back to Lemonade Joe. Although it’s live-action rather than animated, it has some fascinating parallels with the world of animation and cartoons. Think Bruno Bozzetto’s 1965 film West & Soda but with real people.

Needless to say, the early 1960s were an unusual time to be making a Western in the Czech Republic. Even though de-Stalinization and the Khrushchev Thaw had relaxed the stance on American influences, Westerns weren’t that cool in the eyes of the censors. What’s especially interesting is that Lemonade Joe was released on October 16th 1964, two days after Khrushchev was ousted by Brezhnev, who would once more crack down on western influences in culture. One way to make a Western and not evoke official wrath in the process? Make it a parody…

This really is a strange ol’ film. It’s colourful, comic and cartoonishly absurd but definitely not suitable for kids. The colour grading alone is bonkers. The songs veer wildly from sweeping cowboy melodies to honky-tonk; gravelly blues to something I can only describe as “evil oompa”. It works. Sort of. Mostly. At least, I accepted it.

“This movie is dedicated to the rough heroes of the Wild West”, we are told, after an opening credit sequence filled old-timey advertisements for Everything Western: corsets, steamships, photography equipment, horses, guns… The message is clear: the West – or at least, the popular conception of the West – is for sale. This is America, land of capitalism, and the Wild West is just another asset.

So far, so political, but that’s not to say Lemonade Joe stays that way. It soon strays into standard Western parody territory at the Trigger Whiskey Saloon, with one of the most gleeful bar brawls I’ve ever seen. It’s interrupted by the appearance of another stereotype; sultry chanteuse Tornado Lou (cue a Roxanne colour-grade), who is being pursued by the saloon’s owner, the very subtly named Doug Badman, accompanied by his brother, the disguise-toting, cape-swirling, lustful villain Horace Badman, A.K.A. Hogofogo.

And you think thems caricatures? You wait – because here comes Ezra Goodman, the town’s teetotal “Arizona Revivalist” and his blonde, wide-eyed daughter, Winnifred. When they’re hassled by a standard-issue (but very fun) glass-eating thug, who should appear to save them, like a knight in white chaps? Who but Lemonade Joe himself, so called for his love of the soft stuff: Kolaloka Lemonade.

At this point you’d be forgiven for thinking that the rest of the film is going to be painted in similarly broad and primary-coloured brush strokes, but you’d only be half right. Lemonade Joe’s satire isn’t so one-sided as it first appears; it’s as much of a lampoon of the society that produced it as of its supposed target.

Lemonade Joe: I have returned. And with me comes the law!

Lemonade Joe: The Kolaloka is the law.

There are moments where this film seems to be spitting on the idea of capitalism and the American Dream, but in reality are so silly, they’re impossible to take too seriously. On a poster of Kolaloka Lemonade, a picture of Benjamin Franklin declares: “If I were alive, I’d drink only Kolaloka!” “Me too!” answers a picture of Abe Lincoln.

Tonally, this film is sort of a softer-tongued, Soviet cousin of Blazing Saddles (1974). It’s self-aware without being insufferable, and – rather than jabbing an angry finger at the Western all the time – includes several depictions of the genre’s conventions that can only be described as loving. The song “Balada Mexico Kida” is shot almost like a stylized music video, giving us the silhouettes of two drifters against the moon, singing what it pretty much a straight-up American folk song.

Like Blazing Saddles, Lemonade Joe is rather a film of its time, by which I mean, it just wouldn’t be made now. It also means it has a few anachronistic tendencies; Hogofogo’s rather bizarre blackface disguise, for one, and the two female characters filling the same-old roles of strumpet and angel, for another. As you might expect, the characters are all standard-issue, straight outta a corny dime novel: the nice old do-gooder, the oily villain, the trio of thugs… Utilising and subverting these tropes is of course the point of a parody, but the overall success hinges on how well they have been subverted.

Lemonade Joe does manage to turn most of its tropes on their heads, to a greater or lesser extent. Joe is revealed not to be (SPOILERS!) an altruistic, teetotal saviour, but a Sales Agent for Kolaloka Lemonade. Winnifred is less motivated by religious zeal than the prospect of sharing his bonus. Tornado Lou has a change of heart, then another, then another… In the end, even the traditional villain’s role is subsumed by capitalism.

This subversion of character stereotypes provides a lot of the comedy. Apart from that, some of the jokes are a bit ham-fisted and nudge-nudge-wink-wink; Lemonade Joe is described as “all in white, with his Smith & Wessons hanging low”. And some lines seem to have been crammed in indiscriminately for the sake of a laugh:

Lemonade Joe: I asked whether nights are cold here.

Lemonade Joe: Then I ought to take... my warm woollies!

Song-wise, there are some good ‘uns, but a few of them – including Hogofogo’s “Horácův pohřební blues” are pretty bizarre. Not bad, just... weird. 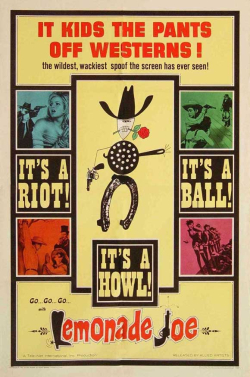 Lemonade Joe doesn’t have the most coherent or original of plotlines, but then, that’s not the point. Stylistically, it’s brilliantly higgledy-piggeldy, as if director Oldřich Lipský was trying to cram in as much Americana as possible, jumping from folk to jazz to vaudeville. It also borrows techniques from animation: fast and slow-motion, superimposed backgrounds, animated smoke rings… Sometimes, it seems like the film might be falling back on these to conceal a few cut corners, but overall, Lemonade Joe takes its limitations and turns them into strengths, or at least, unique characteristics. Bold, brash locations like the God Bless Kolaloka Saloon and Fata Morgana Valley prop up the comedy, while the colour-grading manages to evoke both the sepia tone of a bygone age and the bright plasticity of the 1960s.

One of the criticisms leveled at Lemonade Joe at the time of its release was that it wouldn’t work as a satire, since Czech audiences were – ostensibly – not familiar enough with Western tropes to get the jokes. One look at the animated shorts that were inspired by the 1940 Lemonade Joe stories puts paid to that idea. There’s no doubt that audiences of the time were not only aware of Westerns, but were continuing to enjoy and explore them, even while they were banned.

As entertainment, Lemonade Joe is fun, slightly baffling and difficult to hate. But as a Western it’s remarkable: a double-edged satire that waltzed into cinemas at a time when the Soviet world was about to be hit by another wave of repression. Not only is it remembered today in the Czech Republic, it's considered a cult classic.