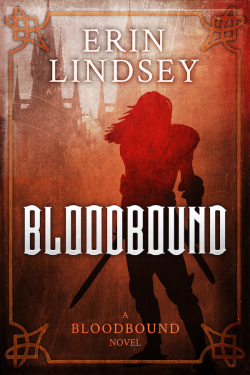 Erin Lindsey's Bloodbound was first published in 2014. The trilogy, continued with Bloodforged and concluded last year with Bloodsworn. The series is now - finally - out in the UK, which gives me an excuse to rave about it again.

Alix Black, one of the scouts for the Kingdom of Alden, is watching a battle unfold. Her king is being overwhelmed by the invading forces of the Oridian empire, and, much to her horror, she can see that the King's brother is very much not executing his part of the plan. Treason is afoot, and both the King and the Kingdom are at risk.

In move that defines Alix - and to some degree, the entire series - Alix plunges recklessly into battle. There's only the slimmest chance of victory. Hell, there's only a fractional chance of survival, but Alix makes up her mind, trusts her gut and goes barrelling forward.

From its initial, breath-taking charge, Bloodbound never slows down. The book isn't wall to wall warfare, as the early pages might indicate, but Alix has a wonderful knack for getting into trouble. In her defense, that's apparently a family tradition, and, before long, we're introduced to her equally headstrong brother, who becomes a (scene-stealing) secondary character throughout.

After the initial battle, Alix is reappointed as a member of the King's bodyguard. Through her eyes the reader gets a front-row view of the political and military action, as King Erik tries to juggle an invading army, his own retreating army, and the betrayal of his brother (and his army). Add to that assassination attempts, espionage and a hint of black magic, Erik and Alix have their hands full.

To add one final ingredient into the mix - Alix is a member of one of Alden's noble banner houses. Although she's more or less 'slumming it' as a scout (she should be all armoured-and-horsed-up as a knight with the other nobility), she still has all the perks - and responsibilities - of one of the kingdom's elite. In the perks category: a magic sword and the ability to hob-nob with the Kingdom's ruling class. In the responsibilities? Try as she might, she's not 'one of' her comrades, and, somewhere on the horizon looms the inevitable arranged marriage. Alix is fairly understanding of the situation - that's just what happens with people of her rank, men and women alike - but it does cast a pall over her budding frisson with Liam, a fellow scout. Or, for that matter, King Erik.

On paper, here's what we've got: the heroic remnants of a noble army, an invading empire of oppressive evil, a love triangle involving three people and sixteen thousand crossed stars, an dark sorcerer, a magic sword and a fairly Chosen sort of heroine that's a multiclass noblewoman/spy/scout/strategist/swordswoman/everything.

That is to say, nothing new under the sun. And there's nothing wrong with these particular plot points and set-pieces. Skilfully combined, as they are here, it turns Bloodbound is one of the most enjoyable fantasies I've read in a long time; a book I cheerfully devoured in a single sitting.

But... and here's the thing with Bloodbound. It might not be abandoning the traditions, but it does bring them up to date. If anything, this is an immensely reassuring book. It provides all the high fantasy comfort we love, but with fresh, high quality ingredients and presented in a contemporary fashion. Bloodbound is the gastropub of high fantasy.

For one, although Bloodbound is by no means erotica, it also doesn't pretend that everyone is a virgin or that consensual physical contact is a literary taboo. Bloodbound treats sex and violence with equal weight. Sometimes this is 'casual': Alix kills people on the battlefield; she has a rendezvous with a sexy man-friend. Sometimes this is more meaningful: a sorcerer's ritual killing affects her deeply; a midnight encounter in her tent leaves her equally touched. At the risk of generalising a little too broadly, this makes Bloodbound doubly-exceptional. First, for not hiding the sex (so many fantasies are cavalier about killing but assume anything remotely risque is too naughty for readers); second, for showing this range of significance. Just like violence in fantasy novels, sex is a means of developing characters, demonstrating growth, providing entertainment, and creating powerful impact.

Another: although I wish it went without saying, Alix is still a novelty - a female character with agency, intelligence and capability. Bloodbound also treats the equality of men and women with a lovely casualness that normalises gender equality in a secondary world. Alix has to deal with an arranged marriage - but so do all the men and women of her rank. She saves Erik and Liam's lives. Erik and Liam save her life. And one another's. She's in the military - all men and women have to serve in the military. She has issues with romance, her upbringing, getting taken seriously - so do the male characters. Her agency is further reinforced as her love triangle heads to a conclusion: the menfolk swiftly realise that it isn't their decision who she loves. It gets to the point where, when the book notes that Oridians have an all-male army, it is a subtle piece of world-building; illustrating not that Alden is particularly enlightened, but that Oridia is stuck in the past. That's actually another point in favour of Bloodbound. There's very little in the way of explicit world-building. The various cultures and kingdoms are brought to life through details like the above or the occasional conversational snippet. No appendix. No map. The way magic works is explained in a matter of sentences, not chapters. Even the names are almost ridiculously simple, take, for example, the banner houses of Green, Grey, Black, White and Gold. The plot is complex, the characters are deep - but the world itself is there to support, not distract. Just as Bloodbound hits the ground running with its opening battle, the decision to keep everything uninterrupted by exposition helps the pace immensely. Bloodbound isn't a dense doorstopper of an epic, it is fast, fun and - despite being the first in a series - self-contained.

The other two books - and I'm trying to keep this spoiler free - as just as strong. Bloodforged, which is almost entirely political schemery, might be my favourite of the three. Alix and her friends have to divide and conquer to prevent being, er, divided and conquered. The teams of heroes travel to different parts of the world in search of allies, but, as you might expect, wind up getting buried in local drama. The final volume, Bloodsworn, is suitably epic, and takes place both in the halls of power and back on the battlefield. As the series grows, so does Alix, and it is a pleasure to watch her grow. Always an enjoyable, likeable character, Alix never loses her deeply-engrained sense of right-ness, nor the recklessness that makes her so much fun to read. She does, however, grow more confident, and more capable: owning the unique combination of nature and nurture that makes her her. In Bloodbound, Alix is in the field, swinging the sword, crawling the proverbial dungeon. In Bloodforged, she's half-adventurer, half-politician, putting a greater range of her skills to use, and solving problems more mental than physical. And in Bloodsworn, she's putting it all together... the brawn, the brains and the heart. Her final tests are ones of leadership and conviction, not swordplay or guile.

This is a fun, fast, invigorating and inspiring series, packed to the gills with tension, heroics, twists and adventure. And, more than that, Bloodbound and its sequels are also a symbol of something more: epic fantasy with all the scale and excitement we demand, but infused with a casual modernity that shows the genre is far from fatigued. This is an ideal gateway series for new fantasy readers, and something pleasantly fresh for existing fans.

A version of this review first appeared on this site in February 2015.

Erin Lindsey's Bloodbound was first published in 2014. The trilogy, continued with Bloodforged and concluded last year with Bloodsworn. The series is now - finally - out in the UK, which gives me an excuse to rave about it again.

Alix Black, one of the scouts for the Kingdom of Alden, is watching a battle unfold. Her king is being overwhelmed by the invading forces of the Oridian empire, and, much to her horror, she can see that the King's brother is very much not executing his part of the plan. Treason is afoot, and both the King and the Kingdom are at risk.

In move that defines Alix - and to some degree, the entire series - Alix plunges recklessly into battle. There's only the slimmest chance of victory. Hell, there's only a fractional chance of survival, but Alix makes up her mind, trusts her gut and goes barrelling forward.