Gray is an insult to real moral ambiguity 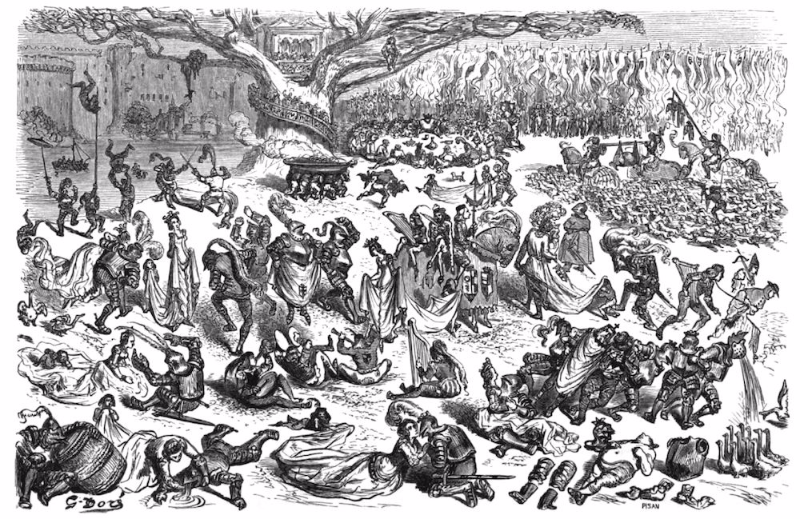 Jaufry the Knight and The Fair Brunissende by Mary Lafon (1886); illustration by Gustave Dore

When Gareth Edwards wanted to make the case that his new Star Wars film, Rogue One, was something new for the franchise, he called it “gray.”

In some world, this is still an odd adjective to sell an entertainment product--connoting, as it does, dreary weather, concrete, and the absence of light, color, and action. But in the world we live in, Donald Trump is President and we all know that “gray” means that a work is for educated adults who have acquired a taste for watching characters they like get murdered.

The metaphor is used so much these days that it’s become a cliche. It’s become synonymous with all sorts of things we like as critics and people of good taste: nuance, depth, ambiguity, complexity. And above all, “realism.” The gray metaphor, however, is not well suited to communicating those traits - in fact, it’s uniquely unsuited for the task.

I’ll start with the obvious. Gray describes combinations of white and black. Every shade of gray exists on a one-dimensional scale where 0 is black and 100 is white.

As a metaphor for morality, it purports to be a rejection of simple good versus evil frameworks. Yet its very framing reaffirms the premise of that framework: there are two moral poles, and every person can be defined by their relationship to those two poles. Far from rejecting monochrome morality and pointing to a new one, the gray metaphor carries it forward, insidiously, into our efforts to shrug it off and see color once more.

One of the best illustrations of the gray metaphor’s limitations is in a work that doesn’t show any pretense to abandoning black and white at all: Star Wars: Knights of the Old Republic. KOTOR provides a helpful scale for the player, as well as their companion characters, letting you know exactly how good or bad a person they are. (The funny thing about this scale is that they re-coded the Light and Dark sides as blue and red, and then had to reshade the middle to be gray instead of purple.) It leaves no question about how the developers weighted personality traits. Carth is idealistic in his support for the Republic, so he gets a 75. Jolee is disillusioned with the Jedi and Republic as institutions, so he gets a 55, despite clearly retaining the Jedi’s sense of justice. Reducing these things to numbers does a disservice to their diversity for no good reason. Even when they’re less explicit, differentiating gray from black is only a matter of numbers.

It’s easy to establish that the metaphor doesn’t literally describe what we mean by it. But that’s true of lots of metaphors. The question is, do we really all know what is meant when we read and write it? I don’t think it’s at all clear that we do. For instance: Does it simply mean avoiding characters with extreme, purist approaches (as in KOTOR), selfish and altruistic in turns? Does it mean that characters tend to act in ways that aren’t clearly coded as good or evil? Does it mean that “bad guys” are humanized and given comprehensible motivations? Does it mean that the narration frames each character’s actions relative to a socially contingent moral framework rather than a timeless and universal one? You may have one of those in mind when you use the metaphor, or some other definition, but they’re all in common usage, and they’re all rather different.

To frame things in terms of a simple dichotomy (they have their advantages!), let’s say that some people use gray to describe mixed or moderate positions on a single moral compass assumed to be shared by the author and their audience, using coding that refers to that external compass. And on the other side of the spectrum, there are those of us who use gray to describe morality that refers to moral compasses internal to the story’s world, built up by the logic of its own social and cultural context. In case it’s not obvious that there are people who buy into the former position, sometimes in very embarrassing ways... well, take a look at this: 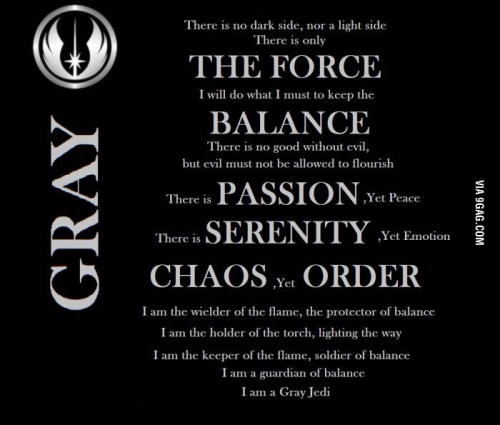 I’m proceeding on the assumption that the latter definition is the one most critics mean to praise and encourage, that what we want is more context, not more waffling equivocation and edge. To elaborate just a bit, we’re talking about morality and ethics on many variables, judged by a living community that feels present in the story. Peter Christiansen at Play the Past explores how Crusader Kings 2 illustrates this principle in a medieval Christian context very familiar to fantasy readers. This framework is naturalistic, agnostic on questions of human nature and eternal souls. It is interested in what characters believe to be true about their morals, and why they believe such things, but not in measuring them against ideals that exist outside the story’s world. It is, not coincidentally, cousin to the framework of academic history. My favorite example is the Starz show Black Sails, which manages to define its characters not just by greed and faction but by how their personalities and worldviews play out in complex scenarios.

There’s no real way to know how much the confusion around the gray metaphor has held back efforts to move beyond black and white morality. It certainly hasn’t stopped the authors already publishing fantasy rich in context and getting critical acclaim for it, from Daniel Abraham to N.K. Jemisin to China Miéville to Seth Dickinson. But I do buy into the power of language and metaphors to shape our reality and limit our imaginations.

If you set out to create a book with gray characters, you’re setting as an end in itself a trait that should be the emergent outcome of the dynamic social context characters are navigating. That makes it much easier to reach for easy signifiers, behaviors that have clear moral cues for the reader but may not do much to flesh out the world of the story as a foreign and fantastic place. Instead of building a world and letting it shape your character, you can just pick up an off-the-shelf anti-hero. There’s nothing wrong with anti-heroes, but they’re no substitute for the context that creates moral relativism.

These questions are likely familiar to many of you, from one angle or another, from the endless debates about the nature and desirability of the grimdark trend that has overshadowed the fantasy market since A Song of Ice and Fire. Grimdark represents a generation of authors throwing off the yoke of black and white morality and trying to figure out what we can do without it. On one hand, that made it, for a while, the vanguard of historicism and “realism” in fantasy. On the other, it is perhaps the place where the gray metaphor has caused the most confusion. Grimdark is where grayness has truly taken on a life of its own, where cynicism and anti-heroics and self-conscious indulgence of toxic masculinity have become not just substitutes for moral context but the trappings of a genre. Far from posing difficult questions about particular dilemmas, gray as often as not simply presents a third default, another faction to vote for straight-ticket.

Having become its own aesthetic, with its own set of genre signifiers, grimdark no longer connotes the desire for realism that motivated us to move beyond black and white in the first place. And that means it’s not really clear what we’re left with when we strip away the tone and tropes of the subgenre - so unclear, in fact, that some readers don’t see any way out besides returning to the black and white framework. If people only see the superficial trappings they’re missing the endless diversity of stories that has been opened to them by abandoning the confines of monochrome morality. They’ve left the cave and entered a world full of color, only to put on a pair of sunglasses. Readers, despite experiencing more moral ambiguity than any fictional character, don’t typically identify as “morally gray.” The term is limp and indirect as laudatory praise, and at best ambiguous as a selling point. So is there an alternative to the “gray” character metaphor, some language that better sells these stories? I don’t know of any, so I’ll propose one. Let’s praise characters who are prisms of their world, taking in a complex array of cues and refracting them back out into something new. It’s not quite as catchy, maybe, and of course it won’t catch on, but it does what I want it to. There’s no judgment, it’s colorful, it changes depending on the angle it’s viewed from, and it emphasizes the interaction between individuals and their environment. Either way, it’s time to use language that does justice to the brilliant spectrum of moral behaviors and motivations in contemporary fantasy.

Adam Kranz is a graduate student in insect ecology at the University of Illinois Urbana-Champaign. He writes about fantasy, games, postmodernism, and environmental history.

Gray is an insult to real moral ambiguity

Jaufry the Knight and The Fair Brunissende by Mary Lafon (1886); illustration by Gustave Dore

When Gareth Edwards wanted to make the case that his new Star Wars film, Rogue One, was something new for the franchise, he called it “gray.”

In some world, this is still an odd adjective to sell an entertainment product--connoting, as it does, dreary weather, concrete, and the absence of light, color, and action. But in the world we live in, Donald Trump is President and we all know that “gray” means that a work is for educated adults who have acquired a taste for watching characters they like get murdered.