Acids, if you haven’t come across them before, are known, and named, for their counterculture tendencies; the desire to kick the western away from the glowy sunset of manifest destiny and into the dark corners of the soul. Made right on the cusp of the 1950s – the decade of the Western Epic – Yellow Sky is a surprisingly off-beat film. Adapted from a novel by W.R. Burnett, who flitted with ease between Westerns and gangster noir, and directed by ex-World-War-One fighter pilot and all round hell-raiser, William A. Wellman, it’s easy to see how Yellow Sky had the potential to stand out as an unusual Western from the start.

Gregory Peck plays Stretch, the leader of a gang of bank robbers and ruffians, who, after looting a small-town bank, are pursued onto seventy miles of deadly alkaline salt flats. With no choice but to cross, they find themselves dying of thirst in the isolated ghost town of Yellow Sky, inhabited only by an old prospector (James Barton) and his granddaughter (Anne Baxter). Apparently loosely based on Shakespeare’s The Tempest, what follows is a clashing of morals, loyalties and greed set within a claustrophobic, visually compelling pressure-cooker.

Without a doubt, the setting is the real star of this film. Yellow Sky looks great, almost alarmingly so compared to other Westerns of the same era, which were often forced to make do with B-movie budgets and materials. Even the quality of the film stock is a surprise, incredibly crisp and clear for something shot almost seventy years ago. Working in black and white, MacDonald makes full use of the Death Valley location with its the arid, inhospitable, terrain; boulder fields in the sun are exploited for chiaroscuro effect, pale dust clouds are kicked into dark angles of shade, silhouettes and shadows abound. Perhaps most memorable in this respect is the final duel between Lengthy, Dude and Stretch; rather than showing the shoot-out itself, we’re presented with the outside wall of the saloon, with its broken window, where the silhouettes of two horses rear in fright.

It all adds to the general feel that the town of Yellow Sky is a no-place, like Hellman’s desert in The Shooting or the snow-locked wastes of Day of the Outlaw. A setting that both highlights and reflects the stark, brutal and often arbitrary nature of humanity; how a person might behave when denuded of society and civilisation. 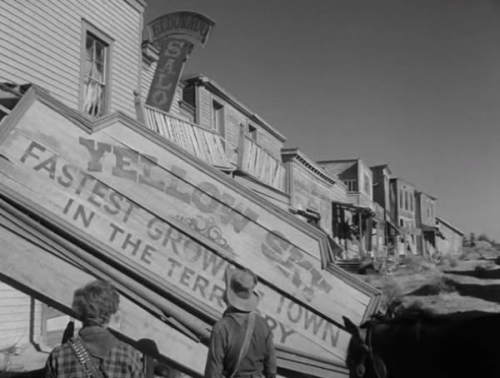 But what of the actors? Oh yes, them. Gregory Peck is a decent lead, playing a former hard-hearted bandit who finds his moral compass swinging towards honesty. However, Richard Widmark (who you might recognise as the lead from Jules Dassin’s wonderful 1950 noir, Night and the City) steals the show as Dude, Stretch’s treacherous second-in-command. Neatly dressed in a white shirt and tie where the others are scruffy, Widmark is a wonderful foil. He plays Dude with a casual viciousness tempered only by a lust for gold.

Yellow Sky is a bit of a smorgasbord of Western character actors. John Russell – star of Lawman and, many years later, crooked Marshal Stockburn in Pale Rider – gives a good turn as brooding lout Lengthy, while Harry Morgan, (aka Col. Sherman T. Potter in M*A*S*H) does a decent job with not many lines as turncoat-turned-ally Half Pint.

Anne Baxter (who was, incidentally, the granddaughter of Frank Lloyd Wright!) does a great job here as the trouser-wearing, shotgun-toting Mike. When Stretch attempts to bully her into giving them food, she threatens him with her gun. He swipes it off her, only to get socked in the face. This being 1948, there are plenty more opportunities for Harassment of The Female Character (more on this later), but not without Mike rather skilfully shooting off some of Stretch’s scalp the next time he tries anything. All in all, Baxter is a compelling lead; she plays Mike as tough, resilient and hot-headed, without being too clichéd. HOWEVER:

As we might suspect from the grabby-grabby poster, there’s a lot of that ol’ Hollywood favourite: kiss-first-don’t-ask-later. Wellman’s guilty of exploiting this, leaning rather heavily on sexual threats to create tension. The film opens with a scene of the gang leering at a painting of a woman on horseback, commenting: “I sure would like to know what she plans to do after she gets done riding that horse”. The subsequent introduction of Mike, a young woman alone in an isolated town with only her grandfather for back-up, has a predictable effect on the gang. She is mocked by Walrus, quietly idolized by youngster Bull Run, and harassed by Lengthy, subjected to constant not-so idle threats. 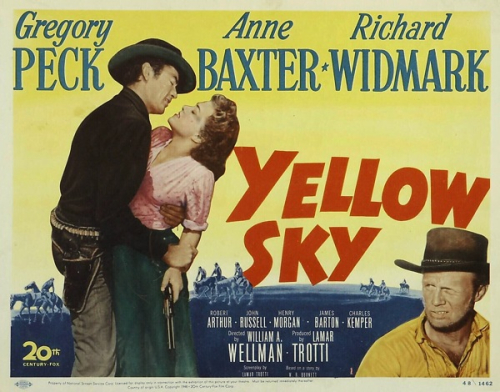 Again, after seeing that poster, we also shouldn’t be surprised to discover that one of the worst physical offenders is the upstanding Stretch himself. After sternly forbidding his men to bother Mike, he can’t help but break his own rule, firstly by insulting her: “You know if you was prettied up a bit you’d look almost like a female,” and secondly by dive-tackling her to the ground to assault her, just to prove that he can. Although she wins both rounds, shooting him in the head and insulting him right back "You smell. Didn't anyone ever tell you before that you smell bad?" eventually forcing him to – literally – clean up his act, it’s still frustrating stuff. But then, this is 1948. Although she rides off at the end in the company of Stretch, wearing a flowery hat,  I suppose the fact she does it as part of a gang, on her own horse, wearing her usual shirt, trousers and gun-belt is some sort of minor victory.

One thing: don’t let the opening of the film fool you. In the first frame we’re told that this is THE WEST, 1867 while an instrumental version of Oh! Susanna plays. Ignore that. Things are about to get better. Also ignore the first line of the film: “Hey! Look at that!” followed by someone pointing to a skull with an arrow through it. IT GETS BETTER. I PROMISE. Of course, we encounter the usual Native American stereotypes and racial slurs, in this case focused on Apaches. Grandpa does comment that Mike was “raised by Apaches… fine people if you can understand them”, and although there’s some standard nonsense whooping and shooting, it’s mostly offscreen, thankfully.

All in all, Yellow Sky is a mixed bag; a Western of its time that makes a decent attempt to side-step the usual tropes, a visually compelling piece that uses the landscape to reflect its overall themes, and a film that has more than a few hidden currents beneath its surface… As Grandpa says: "Guess the war upset a lot of those boys. Got them off on the wrong foot.” What was true of 1867 could be as true of 1948: yet another group of young men, spat out by war, suddenly adrift in a world that has made its moral fragility abundantly clear. A precursor to the Acid Western indeed.