Bellatrix Lestrange is… mostly strange. Her brand of psychopathy is too cartoonish to be genuinely chilling. Draco Malfoy is a child, and his father is basically just a grown-up version of his snivelling, sneering kid, so we can’t really take him all that seriously either. And Snape… well, he isn’t really a proper villain, is he?

Which brings us back to Umbridge. She’s not the toughest or the cruellest or even the most cunning, but it doesn’t matter. She’s something much more sinister: an evil bureaucrat. 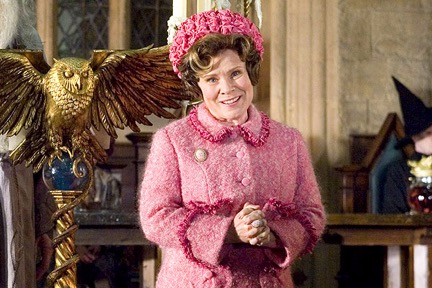 Those manic eyes. That brittle smile. This woman is terrifying.

The words “evil bureaucrat” might not send a shiver down every spine, but if you’ve ever worked for a bureaucracy, or run afoul of one, then you understand the terrible potential of such an adversary. A skilled bureaucrat can wield tremendous power. They know how to pull the levers of great lumbering machines, behemoths that can pummel you into the pavement. Think of them like the human pilots of those giant robots in Pacific Rim: on their own, not so impressive, but put them in a jaeger, and they can smash, slash, and blast their way through just about anything. Such is the canny bureaucrat. 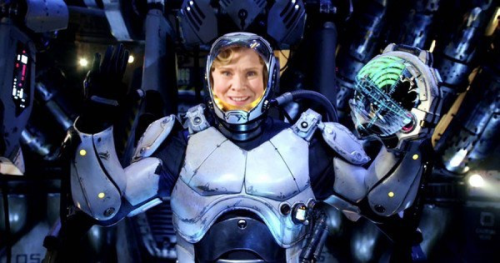 Umbridge’s jaeger is the Ministry of Magic, and she uses its full arsenal of discretionary powers to come after Harry and his friends. Not only that, she uses it to come after the teachers at Hogwarts, and even the almighty Dumbledore is powerless to stop her. This last marks a turning point in the series. Until now, the teachers have been the ultimate authorities, practically demigods in the eyes of the students (and thus, the reader). For much of Phoenix, however, the faculty are every bit as cowed as the students, and several of them are even run off the property. It’s an unsettling development, a bit like that moment in childhood when you realize your parents are just people after all, and not the invincible, all-knowing beings you once took them for.

Which is not a bad analogy, come to think of it, because in many ways, Harry Potter and the Order of the Phoenix marks a sort of coming of age for the series. The pivot point, if you will, between children’s series and something darker. If the pivot first comes in the final pages of Goblet of Fire, with the death of Cedric Diggory and the reappearance of Voldemort, it’s Phoenix where this new direction takes shape.

Appropriately, the first villain Harry faces on this new path is arguably the most adult of the series’ villains. As we established last month, the villains in children’s books tend to be simpler (and, paradoxically, more brutally evil) than their adult fiction counterparts. This is certainly true of Voldemort and most of the Death Eaters. Umbridge’s nuance sets her apart from that crew. And it’s this nuance, this realism, that makes her the scariest of all.

For one thing, unlike Voldemort – and indeed most of Rowling’s villains – she doesn’t telegraph her evilness from miles away. One of Rowling’s signature moves is offering clues about her characters through the phonetics or etymologies of their names: Voldemort, Malfoy, Lestrange. Dolores Umbridge offers no such whiff of malevolence. Neither does her person: she’s described as short, girlish, and outrageously twee, “like somebody’s maiden aunt”. Her mannerisms, too, are deceptively unassuming. She’s a master of passive aggression, disguising her threats behind delicate hem-hems and I-do-beg-your-pardons. In this way, she manages to worm herself into the fold at the Ministry – and eventually at Hogwarts – without anyone being the wiser about her motivations until it’s too late.

And speaking of motivations, here’s where things get really sinister. Not only is Umbridge more realistic as a person, her motivations and methods are very much rooted in the real world. Specifically, in fascism. Not casual fascism, mind you – the soft sort of arbitrary authority every teenager rails against – but the real deal, the kind that genuinely believes the state should enjoy an unquestioned monopoly over power, loyalty, and values. The kind that says some races are inherently inferior and should be ruthlessly controlled. The kind that that turns people against one another, and progressively curtails rights and freedoms until all that’s left is a single leader, accountable to no one, against which ordinary citizens have no legal recourse.

The story of Hogwarts’s descent into authoritarianism is meticulous in its telling. Rowling spares us none of the trappings of early twentieth century fascism, from the endless executive decrees to the increasingly brutal tactics to the student Inquisitorial Squad. Racism – in Umbridge’s case, against half-humans like Hagrid and the centaur Firenze – is on full display. She even uses the obfuscating jargon of a bureaucrat:

“Let us move forward, then, into a new era of openness, effectiveness, and accountability, intent on preserving what ought to be preserved, perfecting what needs to be perfected, and pruning wherever we find practices that ought to be prohibited…”

And the thing is – and this is key – unlike villains in the previous books, Umbridge doesn’t work for Voldemort. She would squeal in horror at the very suggestion. The man she does work for, the fatuous Minister of Magic, is as terrified of the Dark Lord as anyone, but doesn’t believe Voldemort has truly returned. Ignorant and endlessly self-aggrandizing, Minister Fudge is the perfect puppet for Voldemort, unwittingly throwing the wizarding world into chaos, leaving it divided and distrustful. Umbridge, for her part, is a true believer, fighting – in her mind – the good fight, utterly oblivious to the ways in which her methods till the soil for evil to sprout.

It’s about as real-world as it gets – a little too real-world for comfort these days, frankly.

Before I get too political, let’s turn to The Machine, but first – I’d be remiss if I didn’t spare a word for Imelda Staunton, who does such a brilliant job of bringing Umbridge to life in the films. I struggle to think of an on-screen portrayal that more faithfully captures the literary version, right down to the twinkle of unhinged zeal in her eyes. As much as I loathed Dolores Umbridge, Staunton made me want to see more of her.

In the movies, that is.

Strengths: Umbridge is no dummy. She knows when you’re playing her, and she’s pretty resourceful about getting her way. Her direct line to the Minister of Magic helps, giving her the authority to do pretty much whatever she damn well likes.

Weaknesses: Struggles to control her tongue and her temper, especially around half-humans. Massively unpopular, leading to pretty much everyone – students and teachers alike – opposing her just for the sake of it. Not a particularly powerful witch, either, and most definitely a coward.

Best Quote: “I think they deserve rather more than detentions.”

Lair: An office full of kitsch decorations, including cat-themed china, vases of dried flowers, and lacy covers and cloths. More off-putting than scary, though the fireplace that lets you confer magically with anyone is worth at least 2 points.

Toys: A magic wand made of birch and dragon heartstring, plus a pen that can slice words into your flesh and write with your own blood. Not bad. 5 points.

Henchmen: Filch, the Inquisitorial Squad, and her own pet Minister of Magic. Put together, they reign over Hogwarts with an iron fist. 5 points.

Schemes - Scope: I might be stretching it, but I have a feeling this woman would have become Minister and presided over a humans-only dictatorship if she could have. 5 points.

Schemes - Complexity: She’s resourceful, but mainly reactive, and eventually she runs out of rope. 2 points.

Next month: The Operative. And check out the previous villains here.

(Plus some impressive Photoshop skillz by Erin.)