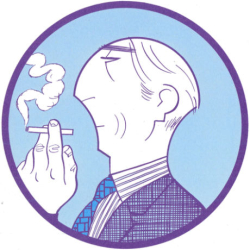 Asterios Polyp is what’s called a paper architect; “that is to say, he was an esteemed architect whose reputation rested on his designs, rather than on the buildings constructed from them… In fact, none of his designs had ever been built.” Contradictions such as this one occur constantly throughout Asterios Polyp, leading the reader to question their assumptions and beliefs, as well as opening the door to philosophical debate. In this case there is the seeming opposition of the theoretical and the actual; theory isn’t ‘real’ in the same way a building is, but the building could not stand without the theory. Mazzucchelli takes this starting point in the rarefied world of academic architecture and moves on to explore all manner of human interactions and endeavours.

Asterios’ key relationship in Asterios Polyp is with his wife, Hana, who is seemingly his total opposite.  Asterios is a formalist, rigidly academic and analytical, while Hana, a sculptor, creates organic and wildly decorative pieces motivated by her own emotional landscape. In these sculptures Asterios sees Hana as “grappling with the reconciliation of opposites”.  In a wonderful piece of visual storytelling, a spotlight literally shifts from Hana to Asterios as he applies his intellectual faculties to her art, analysing instead of feeling; viewing the pieces only on his own terms. This illustrates not only our hero’s arrogance (I use the word ‘hero’ with reservations as he’s not the nicest guy), but also the tension between creation and analysis.

Mazzucchelli uses the dichotomy between Hana and Asterios’ approaches to art to ask what it means to create. Are theory and criticism themselves creative? Conversely, what is it to create art without meaning? And, as Asterios is only an architect on paper, one wonders whether ideas are creations in themselves - or do you need to produce something tangible to be called an artist? Mazzucchelli is kind enough to not supply his conclusion to the problem of where ‘art’ lies - in creation or in meaning. He is satisfied to leave it, like so much in this book, up to the reader.

Art informs Asterios’ and Hana’s approaches to life, and divisions like these lead to the breakdown of their marriage. Opposites in human relationships is another of the frames through which Mazzucchelli works out his philosophy. As Asterios’ reflects on his marriage and life through flashback, the ‘present’ narrative finds him in working as a mechanic in a small town called Apogee (meaning ‘culmination’, just one of dozens of witty jokes throughout this work). 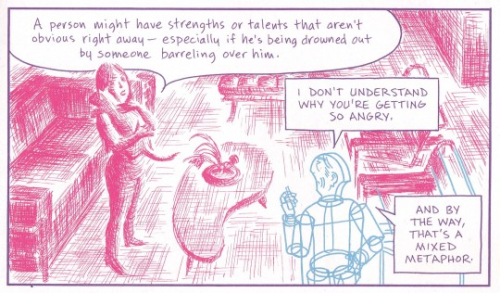 Like so many small towns in literature, this one is used to explore the nature of the human race in microcosm. Here opposition and balance is worked out in the juxtapositions inherent in people. Mostly this centers on the couple who take him in: the mechanic, Stiffly, and his wife, Ursula Major. This pair are a wealth of contradictions, the kind seen all over art and real life: the sweet-hearted brute, the quiet husband and his overbearing wife, the housewife and mother with a rich inner life, the simple mechanic with a big dream. Ursula Major introduces herself as “a shaman in a past life” and is interested in feng shui, dreamcatchers and everything between. Of course, that doesn’t stop her yelling and throwing things at her husband when he brings a stranger to dinner without warning.  Similarly, Stiffly has built his own solar-powered Cadillac (itself a form of contradiction - a notoriously polluting vehicle that runs on sunlight) as a way of preparing for a possible disaster. In creating these contradictory characters, Mazzucchelli reminds the reader that everyone has an inner invisible life, one that, more often than not, is totally at odds with appearances. It’s the awareness of the invisible, hidden lives of people that makes Mazzucchelli’s characters so compelling and fun.

The invisible world is another way in which Mazzucchelli confronts the idea of opposition. Asterios was born one half of a pair of identical twins and, put simply, “one was alive...the other was dead”. With this statement the babies are depicted as opposites: Mazzucchelli deploying the most famous symbol of balance in division, the yin-yang. At times, Asterios is shadowed by the dotted outline of his dead brother, Ignazio. Asterios talks to him in strange, oneiric sequences, with the ghost of Ignazio seemingly living out his own life reflecting Asterios’.

To fill this void in his life Asterios sets up cameras in his home, filming everything that happens and creating his “own video doppelgänger”, a constant invisible version of his life. As a metaphor, it can be used to talk about our inner emotional lives, invisibly present within our physical bodies, or perhaps to express meaning in art, the invisible part of a real object, and, of course, the emptiness of loss. Ursula and Stiffly’s son has an invisible friend and, as Ursula says, “if he sees him, if he hears him... he must exist somewhere, y’know” asking the question, just how real is the imaginary? As real as our own personalities or thoughts, or as the ghost of Asterios’ brother, perhaps.

Artistically, Mazzucchelli carries the theme of opposition throughout Asterios Polyp - to recount all the ways that’s done would take pages and pages. The book is presented in two colour pairs: red and blue shades for flashbacks and yellow and purple for present day. These pairs are opposite sides of the colour wheel, one more way the theme of balanced opposites is expressed. They’re also excellent choices for their settings: the pale blues of the past evoke a colder, washed out history; the warmer yellows make the present more vibrant as well as creating the desert-y, middle-of-nowhere setting of the small town.  Characters are rendered simply but expressively, almost caricatures. 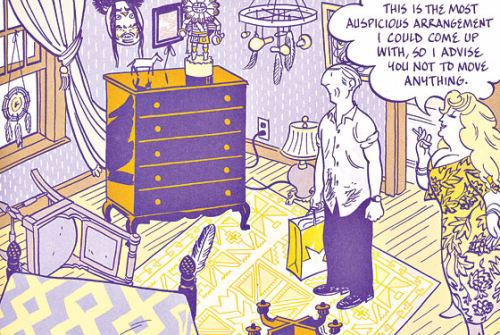 In Asterios Polyp, the art carries every bit as much meaning as the text does, such as having Asterios and Hana rendered as blue polygons or, by using more fluid red cross-hatching as a way to show their different personalities and perspectives. Similarly, each character is given a font that suits them and informs the reader’s awareness of them. Asterios’ font is straightforward, uncomplicated, functional capitals. Hana’s is slimmer, lower case, and with rounded balloons rather than square, while Asterios’ elderly mother speaks in old fashioned curlicues with wavering, uncertain speech bubbles.

Asterios Polyp begins with the introduction of a paper architect, someone who designs buildings but never makes them. From that simple premise Mazzucchelli extracts multiple strands of connecting philosophy. I’ve looked at just three of them: art, the contradictory nature of people, and the presence of an invisible world, but there’s so much more to be found within Asterios Polyp. I’ve not even touched on many other expressions of these themes, such as the clumsy choreographer, the big hole in the ground, or the small-town punk/communist.  In a world that is increasingly drawn into us/them, Asterios Polyp reminds the reader that it’s in these oppositions, divisions, and occasional juxtapositions, that love, art and life are created.