"I certainly do love to read fantasy." 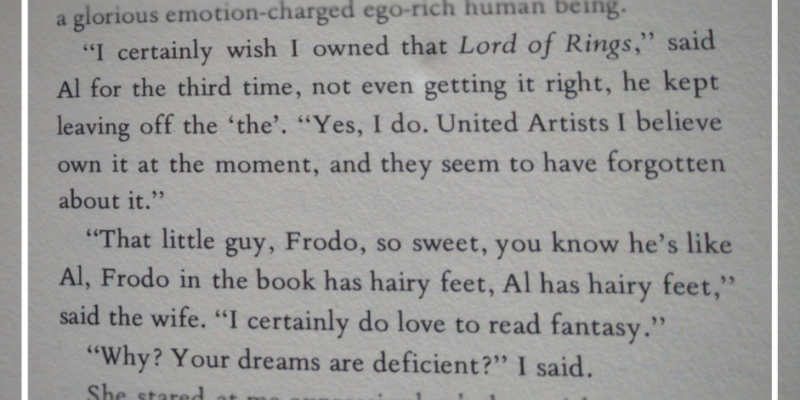 I have had so many Lord of the Rings conversations by now that I can give an effect of having read it, without having to wade through the endless volumes of self-indulgent childish fairy-story escapism itself. Who could remember all those names for a start? I know some people pretend to have got through it all, very pleased with themselves for being so fashionable as to adore "Fantasy." I know what perhaps is great, on those lines but full of truth, the way Dostoievsky is - surreal, lots of linked facts you think are leading in one direction, and the characters think they're leading in one direction, and it turns out that the facts themselves know otherwise - and that's The Ring not Lord of but that nice old family tale of Wagner's, packed with fascist goodies, and incest, which is the highest mark of respect and affection you can pay your family, and obsessions are best kept revolving round and round in the family too, and you learn a lot from all that concentrated distillation. Whereas Tolkien, that's all about nothing, it's about a fight between something called "good" and something called "evil". How I wish somebody write a book for a change in which "evil" wins.

Of course, I do know that in real life nothing ever wins. Something else sneaks up on it and makes another pattern. But in a book it would be a minor and momentary joy to find the something called "evil" winning hands down.

The narrator, as you might be able to tell - even from this short extract, is of the unreliable type. And Gaskell herself wrote several self-indulgent fairy-tale escapes. So don't bust out the torches and pitchforks - rather, enjoy the little slice of life, and admire that time, 40 years ago, when "Fantasy" was unbearably chic.

"I certainly do love to read fantasy."