Pornokitsch
Reviews Books Comics Film Fiction Index
The Djinn Falls in Love - Out Now! Events, Reviews & More! [Updated]
Wolverine rides off into the sunset - with heart, style, and more than a few scars 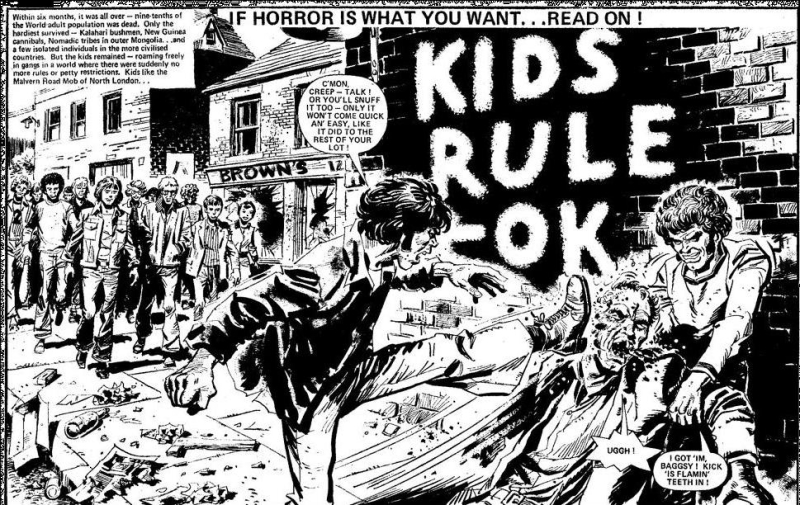 The most intriguing part of Judge Dredd’s origin isn’t the fictional character’s designer birth by DNA cloning, nor that he was based in part on a disciplinarian monk, nor even that when the strip first appeared in the second issue of 2000AD, the original creators had already quit. It’s that Dredd's embryonic form is found in an unpublished issue of different comic – one that was scandalously violent, allegedly dangerous, and deliciously subversive. 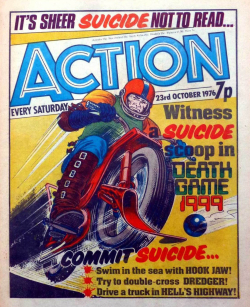 Action was conceived by Pat Mills as a way to bring the stories of adult action films into a boys’ weekly comic.  He had already created Battle Picture Weekly, a war comic intended to displace officer nobility with a squaddies’ cynical pragmatism, and Action had a similar sentiment. Unsubtle homages were developed for Jaws, Dirty Harry, Rollerball and plenty of others, and always with a relish for their violence. These films had ratings that kept under-18s from seeing them in British cinemas, but kids might still enjoy their scabrous equivalents if they could slip a copy of Action under the parental radar.

Yet the strip that Action became notorious for was an original creation. Kids Rule OK was a story of Britain after a worldwide disease that had killed most adults, leaving the children to manage society on their own. It did not predict a noble outcome: the kids descend into Lord of the Flies tribal violence on a nationwide scale.

It was thrilling, but also the undoing of the comic.  One particularly unfortunate cover showed an exultant teenager apparently thrashing a prone policeman with a chain. In a slow summer, the tabloids were incensed – Action was tarred and feathered in the press, and as the media storm grew, barely a parent in the country could have been unaware of its content.  The stories were toned down by the chastened publisher, and eventually, less than a year after its debut, Action was withdrawn.

While this was happening, Pat Mills devised 2000AD. He became the first editor, and oversaw a slate of stories that mapped his transgressive style onto science fiction. It was ‘a retreat’, said Mills much later, but also a useful veneer: where parents might fear the example set by violent hooligans, robots and aliens were much easier to sneak past household censors. There’s unusual consensus amongst those around during its creation – John Wager, Alan Grant, Steve MacManus – that 2000AD was intended to continue the down the path that had been blocked for Action. 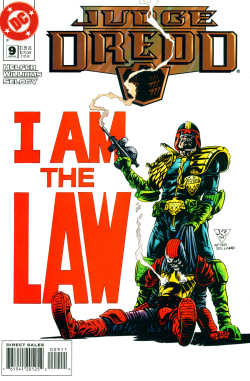 Most famously, this shows in 2000AD’s most popular strip and character: the future lawman Judge Dredd. There is a second star in the strip though – the beat Dredd polices, Mega City One, is a crowded, chaotic mess of inventive crime, borne of both its creative culture, and an inflexible legal system that turns every human impulse into an act of rebellion. It’s the Action philosophy as a metropolis.

And so Dredd is more than a cop.  There’s an oft-repeated précis of his powers: ‘judge, jury and executioner, all rolled into one’.  It’s been used since his inception – Steve McManus recalls exactly that phrase from the earliest editorial discussions of the character, and it’s been repeated in blurbs, movie preambles and advertising copy ever since.  Versions of it are still used in the character’s bio today.

Dredd is an autocratic law-giver for a totalitarian state, he’s Dirty Harry’s inflexibility baked society wide, justice distributed with unflinching brutality.  He’s the embodiment of a stony police state, yet his unchecked jurisdiction allows readers to thrill in his absolute power.  He often proclaims this himself, with his famous declaration of authority – ‘I am the law!’

The influence of Action on this strip’s subversive, satirical, contradiction-rich sentiment is well explored, but I think there’s another, more direct sign.

After the tabloid campaign, Action was briefly withdrawn and many of the strips were sanitised into more anodyne, establishment-acceptable versions. Often this was done by replacing dialogue and erasing violence, but in the case of Kids Rule OK an appeasement had already been envisaged: a swift and absurd conclusion was written in which good-will spontaneously breaks out amongst all the belligerents.

It was – perhaps thankfully – never published, and one consequence was that original art and dialogue remained in storage, more or less unbowdlerised. When they surfaced in the book Action by Martin Barker, two panels in particular jumped out:

The child hero of Kids Rule OK has been captured by one of the few remaining systems of uniformed authority, the police cadets. Their leader is Chief Inspector Stryde, and from him we hear a surviving adult’s take on the new world order: ‘I’m the law... judge, jury and punishment-giver all rolled into one, lad!’

Not only is the similarity to Dredd is unmissable, the mapping is the same too: order for a post-apocalyptic chaos; the kids’ world and Dredd’s Megacity One both fun, corrupted, toxic playgrounds in need of authoritarian law. But a vital pivot separates them. The mob were the protagonists in Kids Rule OK, while Dredd is the anti-hero of his establishment. The subversion of Action that had so animated tabloid interest was concealed, but not neutered, with a shift in perspective.

That’s the version that’s persisted – where the crushing authority figure is the anti-hero, even as the stories hardened into epic sci-fi and satire shifted around it. If the echoes of Action can still be heard in 2000AD, it’s never more so than in its lead character, with all the cynicism and triumph his name evokes. Dredd Rules OK.

Judge Dredd was created by John Wagner and Carlos Ezquerra, Kids Rule OK was written by Christopher Lowder under the name Jack Adrian. Pat Mills created both Action and 2000AD.

The most intriguing part of Judge Dredd’s origin isn’t the fictional character’s designer birth by DNA cloning, nor that he was based in part on a disciplinarian monk, nor even that when the strip first appeared in the second issue of 2000AD, the original creators had already quit. It’s that Dredd's embryonic form is found in an unpublished issue of different comic – one that was scandalously violent, allegedly dangerous, and deliciously subversive.