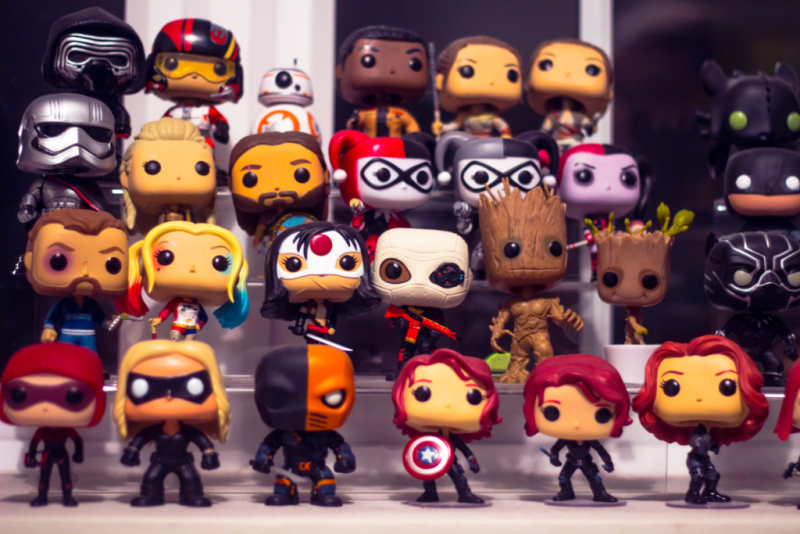 Anne: OMG I have so many opinions. Let's start with the obvious: they're cute. I mean, seriously, they are cute. There's that hypothesis that adult humans are naturally drawn to animals with big heads and big eyes relative to the size of their bodies because those proportions remind us of babies. And what's a Funko Pop but a big-eyed, big-headed, tiny-bodied thing that makes even the most cynical bastard go d'awwww.

But I think that equally - if not even more - important is that they represent the mainstreaming of niche geek culture. At risk of going off on that subject for 5000 words I'll pass the ball back to you.

Jared: I'm always ready to bounce around the ball of mainstreaming niche geek culture. Going back to the 'press release' of the new toys (square quotes for disbelief - press release! toys! still weird to me!), it is fascinating that the Funko news was really picked up everywhere. Having a Funko made of a niche culture legitimises it; a third-party endorsement of a fandom's size, scale and passion.

What's also amazing is the variety - these are toys that represent dozens of shit-hot video games, nostalgic 90s (and 80s) (and 00s) TV shows, comic books, book-books, movies, cartoons... Even the Rugrats memorabilia that, apparently, someone wanted?

Yet, even as I make fun of Rugrats (because, Rugrats, ffs), I'm secretly scouring Amazon for SpaceJam toys.

Thinking about that list above. Many of them - most, even? - also seem to be backwards facing. Is Funko love borne out of nostalgia? Or is that just a function of cheaper merchandising rights?

Anne: I certainly think that nostalgia is a major factor in the Funko Pop! appeal - certainly because Funko is making merchandise for properties that haven't had any merchandise for years - and in some cases, ever. And I think we can't discount the price-point: Funkos are super affordable for everyone with a little disposable income and a fandom of some stripe.

I mean, I think back to the heady days of my dollar-a-week allowance and I just know I'd have been incredibly excited about saving up for a She-Ra Funko - and I would have been able to in relatively short order (unlike, say, saving up for an American Girl doll, which I did when I was eleven; it took the better part of a year because they're expensive as fuck.) So they're affordable and obtainable.

They're also high-quality, which appeals to me as an adult. I love my £5 Jyn Erso action figure, but damn, that paint job is shoddy. I've only ever gotten a single Funko with a wonky paint-job, and it was a very early one. Overall, they feel like good value for money. High-quality merchandise in the geek world tends to be really expensive - I'm thinking specifically of the beautifully crafted maquettes you see in comic book shops, those lovingly sculpted action-heroes-in-heroic-poses (or female-action-heroes-in-provocative-poses) that cost a hundred pounds or more.

But those are secondary considerations. I think the other major factor in the Fukno Pop appeal comes from their accessibility. Unlike the maquettes I mentioned above, Funkos are not cheesy or provocative, and they're not remotely sexualised. They're cute.

Jared: Which leads beautifully to this quote from Holliday & Potts' Kitsch! (2012) that you know I've been dying to use:

[Consuming 'cool' culture'] can, then, be likened to a process of outsourcing; through the appropriation of subcultural identity, insiders get to contract out their feelings while remaining securely inside

I really like the idea of Funkos as emotional outsourcing. A Funko - a super-simplified, almost unrecognisable, adorabilised, de-sexualised, harmless representation of a fandom identity. It is agreeably Bowdlerised, so it doesn't capture any negativity: the the Alien isn't scary, Leeloo isn't basically naked, even Red Sonja's chainmail bikini seems innocuous when Funkofied. These are safely 'appropriated' fan-cultural icons. They represent all the warm and fuzzy feelings, but don't force me to confront the problematic nature (with myself) or ridicule (with others). They're safe.

Basically, a Funko Venom can sit comfortably on my desk at work. The Official Premium 72-Points-of-Articulation Todd MacFarlane Venom cannot. So is that the Funko appeal? They let us fly our geek flags high?

Anne: For us, you and I and our fellow geeks, the answer is yes. The action figures on my desk at work make me look like a giant geek, but my Beast-from-Beauty-and-the-Beast Funko is simply and unaggressively cute.

But Funko simply wouldn't be as successful if it wasn't appealing to a broader market. The first licensing rights the company had were from Marvel, DC and Lucasfilm - all very mainstream properties in 2012, when the first Funko Pops were sold. And they're not children's toys, even though they have clear all-ages appeal, so one doesn't have to shamefacedly skulk through the kids' section of a store, or go to a comic shop, to find them. In a way, owning a Funko doesn't say anything about the owner the way a lot of geeky collectibles do (pace, my beloved Star Wars action figure collection). In a word, Funkos are safe. They're just mainstream and impersonal enough that owning them doesn't automatically identify the owner as a geek, while still permitting a (safe) degree of tribal recognition when someone else catches sight of your rare Edna Head Funko and can say, 'gosh, she was my favourite part of that movie too - where'd you get that?'
In the long run, who knows what'll happen to Funkos. The market's pretty saturated; I'd love to know exactly how many square feet of retail space Forbidden Planet has now given over to them (a lot) and the properties they're marketing are becoming increasingly obscure. But that said, new Star Wars movies and Disney films and comic films come out every year, so there's an endless supply of 'frontlist' properties for Funko to continue to mine even as the 'backlist' stuff becomes stranger and more obscure. And Funko has been very good about not raising prices or doing any of the ludicrous stuff that has gotten other collectible trends in trouble over the years - at the end of the day, the product is what it has always been.
Long may it continue.

This week we're focusing on Funko Pop! toys, and joined by some special guests. Follow along here. And chime in with your own Pop! stories and photos at @pornokitsch.

Posted by Anne in He Said - She Said, Toyetic | Permalink | Comments (1)