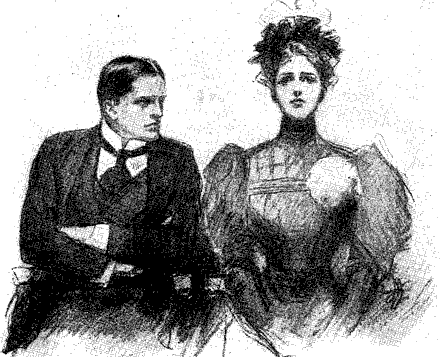 Miss Patterson, on the other hand, represented to the fullest degree the intellectual standard Mr. Augustus Richards had set up for the winner of his affections. She was fond of poetry and of music. She was a student of letters, and a clever talker on almost all the arts and sciences in which Mr. Augustus Richards delighted. But, alas! physically she was not what he could admire. She was small and insignificant in appearance. She was pallid-faced, and, it must be confessed, extremely scant of locks; and the idea of marrying her was to Mr. Augustus Richards little short of preposterous. Others, there were, too, who attracted him in some measure, but who likewise repelled him in equal, if not greater measure.

What he wanted, Mrs. Augustus Richards to be was a composite of the best in the beautiful Miss Fotheringay, the intellectual Miss Patterson, the comfortably rich but extremely loud Miss Barrows, with a dash of the virtues of all the others thrown in.

For years he looked for such a one, but season after season passed away and the ideal failed to materialize, as unfortunately most ideals have a way of doing, and hither and yon Mr. Augustus Richards went unmarried, and, as society said, a hopelessly confirmed old bachelor—more's the pity.

Miss Flora Henderson was born and bred in Boston, and, like Mr. Augustus Richards, had reached the age of thirty without having yielded to the allurements of matrimony. This was not because she had not had the opportunity, for opportunity she had had in greatest measure. She made her first appearance in society at the age of seventeen, and for every year since that interesting occasion she had averaged four proposals of marriage; and how many proposals that involved, every person who can multiply thirteen by four can easily discover. Society said she was stuck up, but she knew she wasn't. She did not reject men for the mere love of it. It was not vanity that led her to say no to so many adoring swains; it was simply the fact that not one in all the great number of would-be protectors represented her notions as to the style of man with whom she could be so happy that she would undertake the task of making him so.

Miles Dawson, for instance, was the kind of man that any ordinary girl would have snapped up the moment he declared himself. He had three safe-deposit boxes in town, and there was evidence in sight that he did not rent them for the purpose of keeping cigars in them. He had several horses and carriages. He was a regular attendant upon all the social functions of the season, and at many of them he appeared to enjoy himself hugely. At the musicals and purely literary entertainments, however, Miles Dawson always looked, as he was, extremely bored. Once Miss Henderson had seen him yawn at a Shelley reading. He was, in short, of the earth earthy, or perhaps, to be more accurate, of the horse horsey. Intellectual pleasures were naught to him but fountains of ennui, and being a very honest, frank sort of a person, he took no pains to conceal the fact, and it ruined his chances with Miss Henderson, at whose feet he had more than once laid the contents of the deposit-boxes—figuratively, of course—as well as the use of his stables and himself. The fact that he looked like a Greek god did not influence her in the least; she knew he was by nature a far cry from anything Greek or godlike, and she would have none of him.

Had he had the mental qualities of Henry Webster, the famous scholar of Cambridge, it might have been different, but he hadn't these any more than Henry Webster had Dawson's Greek godliness of person.

As for Webster, he too had laid bare a heart full of affection before the cold gaze of Miss Flora Henderson, and with no more pleasing results to himself than had attended the suit of his handsome rival, as he had considered Dawson.

"I think I can make you happy," he had said, modestly. "We have many traits in common. We are both extremely fond of reading of the better sort. You would prove of inestimable service to me in the advancement of my ambition in letters, as well as in the educational world, and I think you would find me by nature responsive to every wish you could have. I am a lover of music, and so are you. We both delight in the study of art, and there is in us both that inherent love of nature which would make of this earth a very paradise for me were you to become my life's companion."

Then Miss Flora Henderson had looked upon his stern and extremely homely face, and had unconsciously even to herself glanced rapidly at his uncouth figure, and could not bring herself to answer yes. Here was the intellectual man, but his physical shortcomings forbade the utterance of the word which should make Henry Webster the happiest of men. Had he written his proposal he would have stood a better chance, though I doubt that in any event he could have succeeded. Then he could have stood at least as an abstract mentality, but the intrusion of his physical self destroyed all. She refused him, and he went back to his books, oppressed by an overwhelming sense of loneliness, from which he did not recover for one or two hours.

So it went with all the others. No man of all those who sought Miss Henderson's favor had the godlike grace of Miles Dawson, combined with the strong intellectuality of Henry Webster, with the added virtues of wealth and amiability, steadfastness of purpose, and all that. It seemed sometimes to Miss Flora Henderson, as it had often seemed to Mr. Augustus Richards, that the standard set was too high, and that an all-wise Providence was no longer sending the perfect being of the ideal into the world, if, indeed, He had ever done so.

Both the man and the woman were yearning, they came finally to believe, after the unattainable, but each was strong enough of character to do with nothing less excellent.

III. A GLANCE AT MISS FLORA HENDERSON HERSELF

In the first place, she was tall and stately—Junoesque some people called her. She had an eye fit for all things. It was soft or hard, as one wished it. It was melting or fixed, according to the mood one would have her betray. She was never flippant, and while the small things of life interested her to an extent, much more absorbed was she in the great things which pertain to existence. Dance she could, and well, but she danced not to the exclusion of all other things. With dancing people she was a dancer full of the poetry of motion, and enjoying it openly and innocently. With a man of learning, however, she was equally at home as with the callow youth. With nature in her every mood was she in sympathy. She was fond of poetry and of music; indeed, to sum up her character in as few words as possible, she was everything that so critical a dreamer of the ideal as Mr. Augustus Richards could have wished for, nor was there one weak spot in the armor of her character at which he could cavil.

In short, Miss Flora Henderson, of Boston, was the ideal of whom Mr. Augustus Richards, of New York, dreamed.

And as Miss Flora Henderson represented in every way the ideal of Mr. Augustus Richards, so did he represent hers. He had the physical beauty of Miles Dawson, and was quite the equal of the latter in the matter of wealth. So many horses he had not, but he owned a sufficient number of them. He was not horse-mad, nor did he yawn over Shelley or despise aesthetic pleasures. In truth, in the pursuit of aesthetic delights he was as eager as Henry Webster. He was in all things the sort of man to whom our heroine of Boston would have been willing to intrust her hand and her heart.

But they never met.

And they lived happily ever after.

First published in The Booming of Acre Hill and Other Reminiscences of Urban and Suburban Life (1900), full text available here. John Kendrick Bangs (1862 - 1922) was an editor, journalist, humorist and author, including the 'Associated Shades' series of comedic fantasies, beginning with A Houseboat on the Styx.

Illustration by Charles Dana Gibson, from the original publication.