VINCENT PRICE IS IN THIS

Illustrious acquaintance says they would gladly eat a bowl of mixed fruit with Vincent Price.

I don’t know what that means.

Anyway I think he is an autopsy doctor person.

Did anyone see The Autopsy of Jane Doe? I enjoyed it very much. I watched it while eating some chips and the chips were very good.

Anyway, also there’s this other guy that keeps screaming.

I think Vincent Price is performing an autopsy on this dead guy and someone is just randomly watching him I don’t know anything.

He is apparently doing experimental work in fear.

Illustrious acquaintance says he is doing an autopsy like he is cutting a piece of cloth.

He kind of is tbh.

And there is no blood on his hands either but I feel we can’t be all judgy about that kind of thing if we are going to enjoy this.

I feel the portrayal of the autopsy room has become more glamourous in modern times. This autopsy room looks like a small cupboard with Vincent Price being a handsome bastard in it.

Anyway they are done and going home now.

I guess that’s how it was back then. You did an autopsy and some random person watched and then you went home together.

Also this random person shall hitherto be known as Dude.

“So let me understand this. Dude’s brother-in-law who killed two ladies was killed by electric chair so Dude watched his autopsy and became friendly with the autopsy fellow and brought said fellow home for coffee and Dude has a silent movies theatre and his wife is deaf.” Yes.

Handsome Vincent dropped his saucer in the sink and it broke and he cut his handsome hand and the wife freaked out and she literally crumpled to the floor and then on regaining consciousness, she immediately opened the safe, as one does after one faints.

We can’t tell if Handsome Vincent is chatting with his wife or daughter. Like it keeps looking like they are going in for a kiss but they never do.

I think so we are gross.

Ok so this girl is Isobel’s sister and Isobel is Handsome Vincent’s wife.

Isobel goes out with men who aren’t very nice. That is her job in this movie.

Handsome Vincent is now all by his lonesome, reading a book with a long title.

Isobel has come home in the early hours and is kissing some other guy on the face because as was mentioned earlier, that is her job.

What I can say is Handsome Vincent and Isobel have a complicated relationship which results in them speaking to each other like they are both bananas.

Aaand he just pulled a gun on her.

Seems unnecessary. And it all looks very funny for some reason. And you’re not supposed to laugh at this sort of thing anyway.

I guess he’s going to experiment on her in the lab? In his house?

But first he’s going to shoot her and make it look like suicide.

Illustrious Acquaintance thinks this movie is going the way of Aliens in the Mind.

He shot her in the stomach. How he’ll make that look like suicide I’m not sure.

For one thing, there seems to be no blood.

He is now watching her coyly from a little window.

I mean he’s doing some sciency thing with all the technologies but on the surface, it looks like he is watching her coyly from a little window.

Oh is it x-rays? Does he have an open x-ray machine in his house?

She’s not dead! Ok then.

For some reason she seems pissed off CANT IMAGINE WEI THO

Gosh these people live life in a very risky manner, on the edge, for the largeness of living largely, and all those other things that the liquor ads say.

Dave the lab assistant guy has arrived and Handsome Vincent is showing him an x-ray of…a comb?

Sry it’s a spinal column with something growing on it.

The Tingler is not the best name for this thing imho but my first book was called ‘Insects Are Just Like You and Me Except Some of Them Have Wings’ so what do I know.

Now they are hoping to find someone who will die for science and not scream while doing it so they can learn more about this badly-named phenomenon.

Handsome Vincent has locked himself in the lab and is going to try and scare the pants off himself and also no one seems to like Isobel just fyi.

He has just injected himself with all the scary things.

Dave and NotIsobel are watching him because I guess this will be very interesting.

Now he is taking of his clothes.

Not taking clothes off sry.

So now he’s trying not to scream.

Handsome Vincent is now done with all the scary things and claims to have an idle idea but I think he’s going to do something horrible because he’s been kind of a dick in this movie so far.

He’s going to harass that lady from the silent movie theatre I think so.

So the lady hasn’t been doing so well so he’s given her something and now I strongly believe various things will happen to her and then she will die.

These various things are window opening and a rocking chair rocking like the dickens because no one is the boss of it.

The lady was leaning against a door and suddenly this arm holding an axe appeared and I lol’d like anything why I don’t know I’m a terrible fellow.

The medicine cabinet just opened and on the door was the lady’s death certificate.

That wasn’t as cool as the blood tho.

So she’s dead I guess.

Now Handsome Vincent and Isobel are talking like bananas again.

Dude has come and brought the lady who apparently is not dead?

The lady who had hitherto been covered with a sheet because she was dead is now getting up and lying back down again because maybe she’s not dead?

She’s dead but she keeps sitting up for some reason.

In order to find out what gives, Handsome Vincent is now going to do an autopsy on this woman right in front of her husband. I guess this was considered a good idea back then.

He’s putting up a screen so we can see everything via artful silhouette.

Ok I think there’s something inside her.

IT’S SOME KIND OF INSECT THING

Nooooo don’t call Dude to see it he’s had a hard day as it is.

There didn’t seem to be any blood at all in this autopsy.

Meanwhile, Dude has kept his wife’s body on her bed and taken a mask and knife away I guess he was the one who scared her to death.

I feel bad for doubting Handsome Vincent but not very bad.

Meanwhile, Isobel is going to set the Tingler loose on the unconscious but still handsome Vincent.

NotIsobel heard weird noises and came and saw this Tingler making sweet love to Handsome Vincent’s throat and screamed and that was that.

Gosh life just goes on in this place.

So I think Handsome Vincent has decided that the best thing to do would be to put the Tingler back in the dead woman so he is off to the Dude’s house.

MEANWHILE! Dude is emptying the safe and planning to leave and also the Tingler has pried open the walls of its cage and is about to escape because it is the best thing in this movie.

It is now apparently loose in the theatre.

Also there is a silent movie playing inside this movie and it’s pretty rad.

So the Tingler tried to be friendly with this lady’s leg so they have given an announcement not to be alarmed and everyone is duly not alarmed.

I think the silent movie is about a mailman and his many obstacles in delivering the mail.

The Tingler is now walking across the screen so now the announcement is do not panic but do scream for your lives.

They are truly an obedient people.

Ok now the Tingler is paralyzed so they are showing the rest of the movie thankgod.

So what happened was the dead lady got up again and Dude was laughing? Or maybe he was screaming? Then it was the end.

Not going to lie, I enjoyed that, especially the Tingler itself and that time when Vincent Price kept going THE WALLS THE WALLS. I feel like this would be something to enjoy with friends, if you have them, but if you don’t, I feel that a good bag of chips would do just as well. Bai then. Please enjoy this picture of Handsome Vincent. 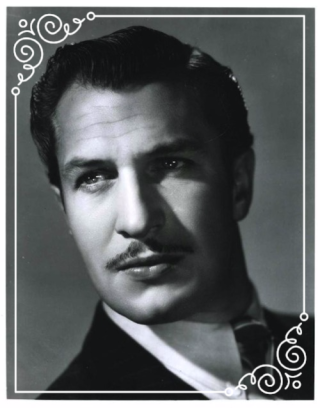