The Operative might just be the truest True Believer I’ve ever come across. His dedication to the cause is so absolute that he’s practically a cyborg. He’s such a cog in the machine that he doesn’t even have a name, so ruthless and relentless that you could swap him out for the Terminator and no one would notice. All this we’re given to understand in the space of a single scene – the opening scene, as it happens.

Serenity begins with a desperate rescue operation: Simon Tam is busting his little sister, River, out of a secret government facility where she’s been experimented on for years. The government in question, a shadowy interplanetary body known as the Alliance, has conditioned River to become a living weapon, giving her extraordinary fighting abilities that can be manipulated through subliminal suggestion. Not only that, River happens to be psychic, making her extra valuable – and a major liability should she ever escape, since she’s been psychically absorbing government secrets for years. When Simon arrives on the scene, the facility’s security squad fights tooth and nail to keep her, but ultimately fails.

As we watch Simon and River escape, the scene suddenly freezes: what we’re witnessing isn’t the actual event, but a holographic record of it, and we’re not watching alone. The Operative observes the scene impassively, hands folded behind his back, Spock-like. When the scientist in charge of the facility storms into the records room and demands to see the Operative’s clearance, the latter offers a mild apology and places his hand upon a touchscreen, and the computer primly declares, “Parliamentary override.”

The scientist stiffens. He’s afraid now. And it turns out he was right to be, because a few minutes later, he’s face-down on the floor with a sword in his guts.

The Operative has kindly offered to facilitate seppuku, the ancient samurai ritual in which a disgraced warrior takes his own life. He performs this killing matter-of-factly, not even waiting until it’s over to begin issuing crisp instructions to the scientist’s assistant while her boss slowly and noisily expires on the point of his sword. But he’s not entirely heartless, pausing mid-sentence to reassure the dying man that he is currently experiencing a good death. “There’s no shame in this. A man’s death, a man who has done fine works.” Um, thanks? 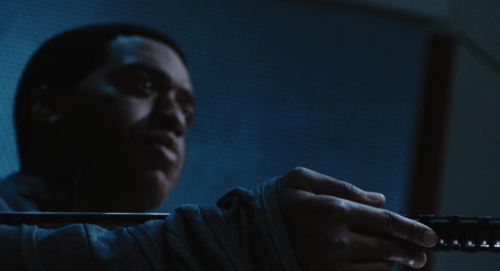 There are no small details in this scene. The juxtaposition of the Operative’s mild manners with his ruthless, efficient killing is in itself chilling. But there’s more. Perhaps because we won’t be spending all that much time with the Operative over the course of the film, Whedon stuffs this scene with as many cues about his villain as possible. When the scientist describes Simon Tam’s rescue as “madness”, the Operative begs to differ: “It’s love, in point of fact. Something a good deal more dangerous.” He recognizes zeal when he sees it – as well he should, since he’s clearly brimming with it. If his affection for bushido – a famously uncompromising code of honour – weren’t evidence enough, he’s also big on religious references. (His habit of mentioning the Seven Deadly Sins, usually while on the cusp of committing violence, is reminiscent of Samuel L. Jackson’s Ezekiel 25:17 speech in Pulp Fiction). It’s a master class in showing without telling – which makes it all the more clunky when, later in the film, numerous characters go out of their way to tell us what kind of man the Operative is. In case we showed up at the theatre late, maybe? Or were still getting popcorn?

Anyway. What interests me about this character, and his archetype in general, is that he’s the ultimate study in the ends justifying the means. Though he probably considers himself a good man, the Operative readily acknowledges that the acts he commits are evil. He can live with that because he genuinely believes he’s working toward a greater good – one so important that there is literally nothing he is not prepared to do to achieve it. He spends most of the film looking determined but empathetic, apologizing and patiently explaining why he’s about to ram his sword through your guts. As if, once he’s explained it, you’ll just shrug and say, “Well, fair enough then.”

Consider this exchange with the movie’s main hero, Malcolm Reynolds. Mal has just discovered that every ally, every friend who’s ever sheltered him has been murdered by the Operative. As he sits staring numbly at the smoke rising outside the window his ship, the assassin himself appears on a computer screen, looking genuinely remorseful:

“I’m sorry. If your quarry goes to ground, leave no ground to go to. You should have taken my offer. Or did you think none of this was your fault?”

“Why? Do you even know why they sent you?”

“It’s not my place to ask. I believe in something greater than myself. A better world. A world without sin.”

“So me and mine gotta lay down and die so you can live in your better world?”

(The Operative looks sadly amused.) “I’m not going to live there. There’s no place for me there, any more than there is for you. Malcolm, I’m a monster. What I do is evil. I have no illusions about it, but it must be done.”

Admittedly, this isn’t one of Whedon’s subtler moments. But then, there isn’t anything particularly subtle about this brand of thinking, and it’s all too prevalent in the real world. Not just among terrorists and fanatics, either; the so-called “good guys” are every bit as prone to rationalize their actions in this way. World War II offers some of the most egregious examples, none more so than the twin atrocities that brought it to an end. Do the ends justify the means? International ethicists and political philosophers have been grappling with that question for decades. It’s a debate that can never really be resolved, because the answer fundamentally depends on your worldview.

There’s no question where Whedon comes down on it, though, and he can’t resist rubbing his villain’s nose in it – along with the audience’s. My biggest complaint about Serenity is that I think Whedon goes overboard here, revelling in the defeat of his True Believer a little too much, and for a little too long. By the time Mal and the Operative have their final showdown, the audience already knows the truth: that in its pursuit of a “world without sin”, the Alliance has committed the greatest sin in the galaxy, killing some thirty million people and turning another thirty thousand or so into a sub-species of murderous maniacs knows as Reavers. In other words, the Operative has sold his soul for a cause that turns out to be morally bankrupt. We know this, but the Operative doesn’t, so Mal straps him to a pole and makes him watch a video revealing the truth.

Fine, so far as it goes, but Whedon isn’t satisfied with this climax; he has to light a cigarette and linger over it. Not only do we have to listen to the video all over again, we have to watch the Operative watching it. The camera zooms in just enough to let us see the glimmer of tears in the Operative’s eyes: Whedon wants to make sure we witness the precise moment the man’s heart breaks. But wait – we’re not done. The Operative could still have Mal and his friends killed – they’re enemies of the state, after all – but he doesn’t. “Stand down,” he tells his men, sadly. Oh, and still not done: we have the denouement, in which the Operative hides Mal and his crew and repairs his ship. Mal says he never wants to see the Operative again. “You won’t,” the Operative says, sadly. “There’s nothing left to see.” He turns away. Sadly.

Not only is this entirely over the top, it doesn’t ring true to me. One of the most essential features of True Believers is their tendency to bend reality to their will. Faced with facts that don’t fit into their worldview, they attempt to torture the truth into submission, and if that doesn’t work, they just delude themselves. Would the Operative just accept the account he’s watching on that screen, instantly and without question? No way. He’d call it fake news, and if that didn’t work, he’d concoct some narrative to rationalize it. No, Whedon’s True Believer is a tad too credulous for my liking.

Of course, even this over-the-top stinker of an ending isn’t enough to dampen my love for this film. Sadly.

And now, the Machine.

Strengths: He’s smart, strong, meticulous, and you can’t make him angry. He’s so Spock-like he even does a nerve pinch thing of his own, paralyzing his victims before running them through with a sword. (How weird is that?) A cunning and ruthless tactician, and oh yeah – he has super secret clearance and the whole Alliance fleet as his disposal. Jeebus.

Weaknesses: Absolutely none – until he finds out that his whole mission is a lie, and then he folds like a house of cards. He’s like an Ultimate Killing Machine with a handy “off” switch.

Best Quote: “Secrets are not my concern. Keeping them is.”

Lair: None to speak of. He spends the entire film chasing Mal wherever he goes. 0 points.

Toys: A sword (how weird is that?), full body armour, and a ship or fifty to take him anywhere he needs to go. 5 points.

Next month: Special feature! In the mean time, enjoy the dastardly deeds of these other villains.