Pornokitsch
Reviews Books Comics Film Fiction Index
"This slum of literature"
Otared, Graustark and The Winning of Barbara Worth 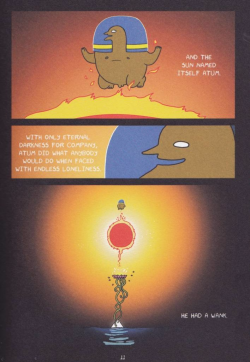 The respective deities of these cultures tend to be treated similarly; their intricacies and strangenesses flattened out and replaced with a whitewash of aloof regality.  In actuality the ancient gods were most often capricious, ill-tempered and petty.  Take for instance Athena, Greek goddess of several things, wisdom famously being one of them. Athena may be wise but that doesn’t mean she’s above squabbling with her sisters over who was the most beautiful and punishing the poor mortals who were trapped into judging these competitions. Athena picked her side in the Trojan War based off just such a contest. Paris picked Aphrodite over her: definitely an offence worth getting into a war over.

In Pantheon, Hamish Steele tackles the Egyptian deities in a way described by Steele as “a faithful retelling of […] the battle between the gods Horus and Set for the throne of Egypt.”  Perhaps the most interesting word in that quote is ‘faithful’.  I’m no expert on Egyptian mythology, so I’ll have to take the author’s word on the majority of the facts but I somehow doubt that any of the gods referred to Set as “a notorious cock”.  It’s exactly this mixture of genuine mythological weirdness (and we’re talking totally batshit) and modern irreverence that creates Pantheon’s unique and very successful blend of humour.

Pantheon was originally created as a black and white graphic novel, funded via Kickstarter in 2014. Fast forward a few years and now a full colour version has been released from Nobrow Press. The book starts like this: in the beginning a giant pyramid named Benben (cos sometimes pyramids have names) rose out of the sea and grew a lotus which in turn flowered the sun.  The sun named itself Atum and “did what anybody would do when faced with endless loneliness… He had a wank”.  And that, boys and girls, is the beginning of the entire Egyptian pantheon. Don’t we all feel better now we’re learning. From there, we see how the gods originally lived amongst people (until they totally fuck it up), how they leave to a higher plane, and then onto the meat of the story: Set angling for the throne, killing Osiris in the process, and going head-to-head with Horus.

The plot, as mental as it is (seriously, a lot hinges on a magic dildo) is really only the jumping off point. Steele has been incredibly clever in how he handles the sprawling cast of characters in this story. While the bulk of the story focuses on Isis’ attempt to avenge Osiris and remove Set from the throne of Egypt, as well as the ensuing contest between Set and Horus, there are cameos or scenes featuring numerous other members of the pantheon.  You’re sure to have your favourite, be it Horus, the well-meaning meathead, Set, the scheming douchebag, or even one of the side characters like Sekhmet and her unfortunate love for killing people. My personal choice would be the perpetually perplexed Thoth, the only one of the gods who seems to realise how truly insane this all is, especially when he somehow ends up being born (again) as the son of Horus and Set.

To aid readers with this sprawling skein of interrelated characters and relationships, Steele provides a handy, if baffling, family tree at the beginning of the book. I found myself referring to it more than once in an attempt to make all this make sense (spoilers: it doesn’t).  Of course, that’s part of why this is described as a “faithful” retelling; these stories are part allegory, part fable, part legend - they’re not really supposed to follow logical rules. 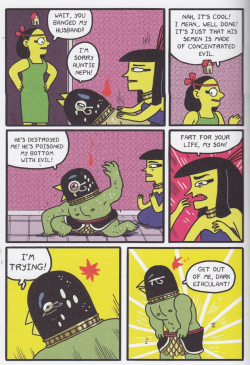 As the plot, such as it is, was created by the ancient Egyptians, we can’t give Hamish Steele too much credit for it, if, indeed, he even wants any - have I mentioned how weird it is? However, we can rightfully congratulate him for the way in which he has amalgamated different sources and versions of overlapping narratives into one (more or less) coherent story. I’ve also rarely read a funnier graphic novel, nor one that manages to blend its art style and humour so cleverly. The figures are rendered in a two-dimensional style reminiscent of the notorious Egyptian side-profile art we’re all familiar with. Instead of the straight-backed, austere friezes of the ancient world, Steele’s characters have a bouncy roundness, invoking the innocence of children’s books and pleasingly juxtaposing its mature themes and graphic content.

A word should be said on the colours as well. The original Kickstarter version of Pantheon was black and white, but the new edition from Nobrow is presented in marvellous technicolour. And I do mean technicolour. As befits a desert setting, you get a lot of flat yellow here, but it’s bright and warm and complemented with purples and reds. Also, I know you shouldn’t judge a book by its cover, but Horus kicking Set in the balls is a delightfully childish choice. It is also an inspired one when paired with metallic gold text; a perfect illustration of the way Steele undercuts the pretension with which we treat mythology.

In an author’s note at the end of the book Steele writes that, for him, the only way to present a truly faithful version of these stories was to put humour back into our dry and academic versions of the ancient myths.  As he points out, these myths were “never meant to be taken completely literally [but] supposed to be funny and entertaining”.  Well, they certainly are now.