Pornokitsch
Reviews Books Comics Film Fiction Index
Amazon is a Slytherpuff and Other Revelations
What if Apple bought publishing?

But for all of my cringing… I can’t help but feel strangely proud of that first manuscript. It has an exuberance, a what the hell-ness I would never be able to replicate now.

Anyone who has read these reviews will know that I'm a big fan of low-budget films, and of early works, which go hand in hand most of the time. The thing I love about debuts is that they aren’t complete and polished; they let us see the rawness of a director’s ideas, their preoccupations, the tones and ticks that might go on to appear time and again in their later works.

Thankfully for us, Edgar Wright's debut feature, A Fistful of Fingers, doesn't have the luxury of hiding at the back of a filing cabinet. True, it's not an easy film to get hold of; it never had an official release through a distributor and, apart from a handful of screenings over the years, is rarely shown in public. But! Your own Pornokitsch Western reviewer is nothing if not dogged, and with the persistence of a mangy buzzard stalking a dying man across the desert, I managed to find me a copy.

And you know what? A Fistful of Fingers is much better film than I was expecting. In classic Western fashion, it opens with two ne’er-do-wells, rifling through a murdered man’s possessions, only to be interrupted by the arrival of an ominous pair of boots and a pair of narrowed eyes. It's Graham Low’s Man with No-Name; a husky-voiced drifter with an extreme Eastwood squint and painted-on stubble. It’s also clear, straight off, that this is going to be a homage to the Western genre with a hefty dose of British absurdist comedy and tongue-poking thrown in:

Bandit: This is none of your business. I suggest you get out of here.

No-Name: Well I suggest… you stick it up your ass.

No-Name: You know I can’t do that.

For all the opening scene’s joyfully ropy American accents and overt comedy, it’s still a tidy bit of filmaking, with an accomplished shot-reverse-shot sequence and some rather fine long shots. It hints that, although the film might not take itself too seriously, the director himself is serious about his business. 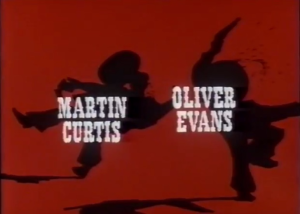 If we needed further confirmation of that, we find it in the animated title sequence. Created by Oscar Wright (Edgar’s brother), it’s a fantastically characterful piece of work that blows many bigger budget title credits out of the water. With its red background and silhouetted figures, it recalls the titles of The Good, The Bad and the Ugly (1966) while the gunshots, fired directly at the screen, hark back even further to the early days of Western filmmaking and The Great Train Robbery (1903). Combine this with a lively, original orchestral score, and the film is hefted firmly above amateur-hour, even before we reach the first scene…

…which opens with a classic Leone-style haze, as our nameless drifter rides onto the crest of a ridge. Although the ridge is more of a pleasant, rolling Somerset hillside, and the horse one of the hobby variety. “DEADWOOD TOWN, THAT AWAY” reads a sign, beneath which a poster advertises a notorious desperado by the name of The Squint, wanted “for killing 1000 men dead”. Recognition flares in No-Name’s eyes. Presto, we have our set-up.

Many of the cast and crew of A Fistful of Fingers were Wright’s childhood friends rather than professionals, but nevertheless, Oli van de Vijver works his false moustache and eye muscles and gives a good turn as The Squint, “the baddest rustler in the West”, who causes the death of No Name’s beloved horse, Easy. (These days he’s an Art Director, currently working on the new Star Wars film. Van de Vijver, that is, not the horse). Martin Curtis also holds his own, and is a sport, as No-Name’s “Injun” companion, Running Sore (groan) who agrees to help No Name get his revenge on The Squint. “Why not?” he shrugs. “I could use a good quest.” 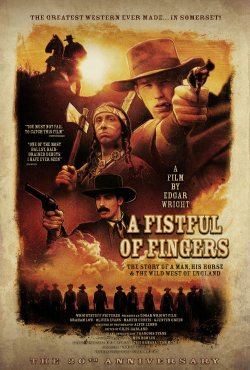 As you can probably tell by now, A Fistful of Fingers is a trove of Western and genre influences, from Blazing Saddles­-esque visual gags, to Monty Python absurdities. But, even though the film has more ingredients thrown in than a bottle of rot-gut, Wright still manages to bring his own distinctive style and humour to the fore. The scene in the saloon (“salon”, the sign reads), with its rhythmic ticking clock, wiped glass and swished fan, is a recognizable precursor to everyone’s favourite rave-head Tyres in Spaced.

This sort of rich, dense visual humour, coupled with cult references and choppy editing, is part of Wright's distinctive directorial style. In light of this, his choice to make a comedy Western as a debut feature, although initially surprising, is a logical one.

Cinematically, the Western is defined by its tropes, and as a result, affords a director more stylistic visual opportunities than almost any other genre (except perhaps horror). There are so many established motifs to play with; Leone-style extreme close-ups, lingering long shots, fast-cut quick-draw sequences, elevated angles, hazes, flashbacks… Wright tackles all of these in A Fistful of Fingers, and for the most part, makes them work.

But it's also interesting that A Fistful of Fingers seems to lean more towards Leone than any other Western director. Leone’s Westerns are necessarily cut-off from the American-made Westerns of the earlier twentieth century. They explore the cinematic mythology of the West with great zeal and energy, even when that mythology has become a worn, clichéd parody of itself. As a result, they are disconnected to the point of surrealism, knowing, irreverent, and yet, still Westerns; passionate homages to one of the most visually resonant genres in cinema and literature.

And, comic though it is, A Fistful of Fingers is part of this tradition. Cut-off from the visual grandeur of Monument Valley, from a Hollywood budget and horses on tap, Wright uses limitations to his advantage, and manages to evoke, affectionately lampoon and subvert the Western genre; hobby horses, melon-heads on sticks and bad fake moustaches included.

Sure, there are some clunky elements. I’m sure Wright now looks back on the character of Running Sore, for instance, with a bit of a wince. Some of the gags fall flat, some of the timing is off, and yeah, it would have been nice to have a few more female characters. (Even with the inclusion of Amy Bowles as an “Injun” hostage, a sign around her neck that reads “Token Female”. “Do I get any lines?” she asks. “Of course not,” is the answer. “Now run!”)

As a Western, it’s good fun, and as a debut, it’s a hell of an effort. At the age of twenty, Wright obviously had a real eye for the visual language of cinema. Not to mention the element of surprise; there’s a killer cameo in the finale that will have any viewer of 1990s UK television gripping their seats and shouting WHAT THE ACTUAL FUCK??!! at the screen.

So, I hear you ask, if it’s a decent film, why is A Fistful of Fingers not more widely available? I don't know, is the answer. Perhaps it’s because early debuts can be strange beasts. There’s a tendency, especially in the light of new work, to see them as somehow definitive of artist. Wright himself said at a recent screening of A Fistful of Fingers that it’s no Citizen Kane. But viewing a director’s earliest effort as somehow their most true and complete discounts the reality that, as artists, they will be constantly evolving, learning fresh techniques and drawing on new influences; even if a few old tricks still crop up from time to time.

Wright has come a long way from the grassy hills of Somerset and hand-painted toy guns, as his latest, highly-grossing, Baby Driver, shows. And so whilst A Fistful of Fingers may not be the work he wants future generations to remember or judge him by, it’s sure as hell one he shouldn’t be ashamed of either.