Pornokitsch
Reviews Books Comics Film Fiction Index
Growing Up On The Ice: Tillie Walden's Spinning
10 Films We've Outgrown (But Were There For Us When We Needed Them)

Among Trek fans, the scripture is clear: there is but one Khan, and He has a silver mullet. The existence of a small Benedictine branch of the faithful does nothing to sway the orthodoxy; these poor misguided souls are merely apostates.

So pervasive is this sentiment that 2013’s Star Trek: Into Darkness, in spite of being broadly well reviewed, was the object of considerable backlash from Trek fans, its many merits overshadowed by this one central flaw. In fact, I’d suggest that the merits of the film’s villain, and of the actor who portrayed him, were similarly overlooked, in some ways unfairly.

I know, I know. I can practically hear the cries of “heresy!” from here. But before you reach for the holy water, hear me out.

There’s no question of who’s the better villain, still less who’s the better Khan. And yet, on paper at least, there should be. By virtually every objective measure, Khan 2.0 (Benedict Cumberbatch) is clearly superior – yet he still falls flat compared to the original. Why is that? 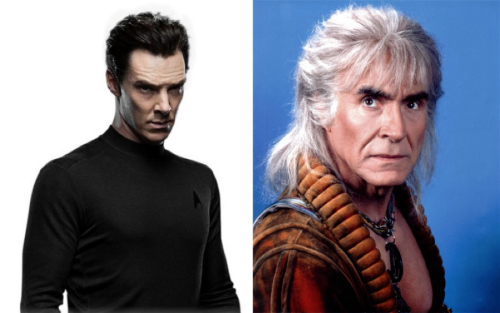 Mirror mirror on the wall, who’s the Khaniest Khan of all?

Two things I won’t consider in this analysis: Ethnicity and legacy. On the first, neither actor is South Asian, so that’s not a useful point of comparison.* On the second, it’s silly to argue that Cumberbatch fails simply because his portrayal doesn’t respect Ricardo Montalbán’s “legacy”. If his performance had been half as hammy as his predecessor’s, it would never have worked (just as it wouldn’t have worked if Chris Pine’s Kirk had been a quarter as hammy as William Shatner’s). These films are from different eras, with very different sensibilities, so a straight-up comparison of their portrayals is neither fair nor interesting.

Take those two things away, and what’s left is a pretty good window onto what separates a great villain from a merely adequate one.

Let’s start with the OG.

Khan Noonien Singh first appears in the original series episode, “Space Seed”. The Enterprise comes upon an ancient Earth vessel adrift since the late 1990s, its crew in cryogenic stasis (presumably listening to Fiona Apple’s Sleep to Dream on perpetual loop). The leader wakes up, and before he’s even opened his eyes, the Enterprise’s historian (is that even a thing?) has fallen madly in love with him. Lest we think she’s just a silly, impressionable girl, McCoy declares, “He has a magnetism. Almost electric,” which is clearly his medical opinion, and Kirk later explains to a puzzled Spock that “we can be against him and admire him all at the same time”. In other words, we are shown, but mostly told, that Khan is one irresistible hunk of man-chest. We are also told that he has superhuman strength and intellect.

In “Space Seed”, Khan only manages to wreak havoc because Kirk is dumb enough to give this total stranger access to the blueprints of his bloody ship. (Really, Jim? Why not hook the guy up with some keys to the armoury while you’re at it?) Similarly, in Wrath, Khan gains the upper hand because Kirk – in spite of expressly being warned not to – approaches the USS Reliant with his shields down, even though it’s plain to everyone on the bridge that something fishy is going on. Later, Kirk gets caught with his pants down yet again when Chekov betrays him while under the influence of a mind-controlling space bug (the Ceti Eel, which to this day is one of the creepiest, most traumatic things I’ve ever seen on screen).

This is SO NOT OK

Kirk might be forgiven for falling for this trickery had Chekov not literally just finished telling him that he’s been subjected to mind-controlling space bugs. Nobody thought to scan the guy to make sure the space bugs were gone? Bones? Jim? Bueller?

Point being, although we’re repeatedly told that Khan has superhuman intellect, he doesn’t actually get a chance to prove it, because Kirk is such a bonehead.

Then there’s the muscle. Again, we’re told that Khan is supercharged, but apart from bountiful views of that manly chest and an early moment where he hoists Chekov off the ground with one hand, we don’t actually see much evidence of this. (Kirk even manages to beat him down with a pipe in “Space Seed”, seemingly without breaking a sweat.)

Contrast all this to Khan 2.0. Within the first half hour of Into Darkness, he saves the life of a terminally ill child, guns down most of Starfleet’s senior officers, and wipes out an entire patrol of Klingons more or less single-handedly. He patiently allows Kirk to beat on him – over and over and over – until the captain is too exhausted to continue, all the while looking somewhere between bored and amused. He anticipates his enemy’s every move, and shrewdly manipulates Kirk into helping him. Later, he develops a weird affection for crushing people’s skulls with his bare hands. He can jump from thirty-metre heights, resist a Vulcan nerve pinch, and regenerate a dead man with his “super blood”. Plus, he’s got serial killer eyes and a sepulchral voice.

Might alone does not a great villain make. In fact, this version of Khan perfectly illustrates the pitfalls of having an overpowered antagonist. For one thing, it opens the door to too many plot holes – chief among them the whole “super blood” angle, which culminates in the deus ex machina moment of Kirk’s resurrection. (If this “super blood” has existed since the 1990s, doctors would presumably have been synthesizing it for centuries.) It also paints the story into a corner, whereby in order to overcome this superhuman foe, either our heroes must achieve something that ought to be out of their grasp, or our villain must do something uncharacteristically stupid. Into Darkness chooses the latter option, with Khan inexplicably failing to consider the possibility that the torpedoes he’s ordered Spock to beam over to his ship might be armed. Of course they would be armed. Even the boneheaded Kirk from Wrath could have called that one. 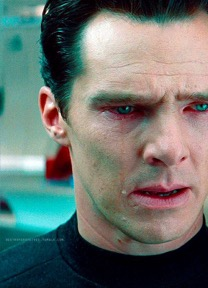 Even your single man-tear can’t fool us.

I could have lived with these problems were it not for the fact that Khan 2.0 is also completely without soul – and herein lies the fatal flaw. His motivations are too remote and generic to be interesting. He wants to save his crew, whom we’ve never met – oh, and also lay waste to worlds for some reason? These objectives have nothing to do with Kirk and the Enterprise, and his eventual antagonism towards them is purely opportunistic; they are a fly in his ointment, nothing more. So in spite of the film’s best efforts to generate pathos by convincing us that Khan has feels, we really don’t care.

In contrast, the conflict in Wrath of Khan is intensely personal. It turns the above formula on its head: Yes, Khan steals the Genesis torpedo and would presumably have used it to lay waste to worlds, but for him, this is the opportunistic bit. What he really wants is Kirk. He’s waited fifteen years for a chance at revenge, and when it comes, he seizes on it with singular devotion, putting aside all other distractions in his relentless pursuit of our heroes. When his crew protest that he should forget Kirk and be satisfied with his world-killing torpedo, Khan dismisses the idea:

“He tasks me. He tasks me and I shall have him! I’ll chase him round the moons of Nibia and round the Antares Maelstrom and round perdition’s flames before I give him up!”

Not only does this obsession keep the tension high, it provides a plausible answer to the problem of how to overcome a villain this powerful: Khan’s lust for revenge is so white-hot, his pride so inflamed, that he would rather die and take Kirk with him than live and rule the galaxy (a rage Kirk cleverly exploits, somewhat making up for his earlier dipshittery). In other words, our heroes don’t really need to overcome this supervillain; he’ll manage that more or less on his own. 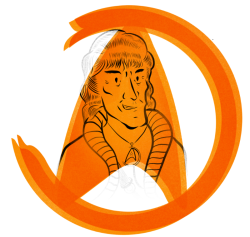 These deeply personal stakes are what make the film – and more importantly, it’s what makes Khan, Khan. Absent that, Cumberbatch’s villain is merely John Harrison (the alias he adopts early in the movie). And the thing is, John Harrison is a decent enough villain, stacking up pretty favourably against most of the franchise’s baddies. Cumberbatch, moreover, chews plenty of scenery, and is downright chilling at several key moments. He’s just… soulless.

Into Darkness does its best to fill this void with destruction and mayhem. In this, the film is very much a product of our time, in which we apparently feel the need to turn everything up to eleven. (My biggest complaint about Into Darkness is the casual kill count, especially when Khan crashes a dreadnaught-class starship into downtown San Francisco, scything through skyscrapers and presumably killing thousands, but we don’t really know, because who cares, because that’s just how we like our summer blockbusters these days. Et tu, Star Trek?). In so doing, the movie proves – if more proof were needed – that all the explosions and trench coats in the world can’t disguise a two-dimensional villain.

Meanwhile, the original Khan deserves a better fight than he got, one in which he has the opportunity to show us, instead of just telling us, how badass he really is.

At this point, I hope they give the character a much-deserved rest. But if they ever do resurrect him, I hope they’ll combine the best of these two Khans – the machine (Khan 2.0) and the soul (Khan 1.0). Now that would be a supervillain.

And speaking of machines, it’s time for ours. But since we can’t put both of these very different Khans through at the same time, we’ll stick to Version 1.0.

Weaknesses: Khan’s only real weakness is his single-minded obsession with James T. Kirk, but it’s a pretty debilitating one. I mean, really – the guy has his own starship, a crew of supermen, and a world-destroying/world-creating missile, and he blows it all for an aging admiral in a toupée? Yeesh. 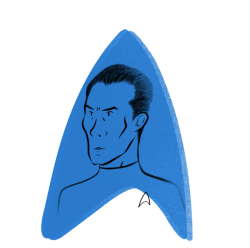 Lair: The wreckage of the Botany Bay looks more like a desert bunker than a lair, though you have to give him credit for making a home of it. 1 point.

Toys: A stolen starship, the Genesis torpedo, and a mind-controlling space bug. This is about as good as it gets, folks. 9 points.

Henchmen: A super genetically-enhanced crew of ex-Chippendale exotic dancers willing to die for him. Again, it’s tough to top that. 9 points.

Schmes - Complexity: Adopting a thin disguise and hoping your nemesis is too boneheaded to take appropriate precautions is hardly the most sophisticated plan in the world. On the other hand, it worked. 3 points.

Next month: Wait and see. Oh yes. Yes, indeed. For now, please enjoy the evil of these other villains.

*This isn’t to say the ethnicity of the actor isn’t a valid point of criticism – it is – just that it doesn’t help explain why one Khan is better than the other, since neither measures up in this regard.