Pornokitsch
Reviews Books Comics Film Fiction Index
Pennywise and Paper-Thin: Why IT’s clown is too two-dimensional to be terrifying
101 Explanations, or why good people are buying a bad thing

Throughout history, accusations of witchcraft have been laid upon women for untold reasons, but the narrative of patriarchy, power and violence against women transcends individual cases. Casting headstrong or independent women as witches has a long history in the arts and it is only (relatively) recently that the move to reclaim witchcraft as a symbol of feminism has really taken hold.

This is no less evident in comics as it is in other media. Recent titles like Harrow County, The Chilling Adventures of Sabrina, and Redlands all present interesting reinterpretations of witches, and what they really represent.

Harrow County, written by Cullen Bunn and illustrated by Tyler Crook, takes the reader to the deep swamps of the American south for a creepy coming-of-age horror. In its opening story-arc, ‘Countless Haints’, Emmy, a farmer’s daughter, is just about to turn eighteen when she finds herself connected to the haints: ghosts and things that go bump in the woods. 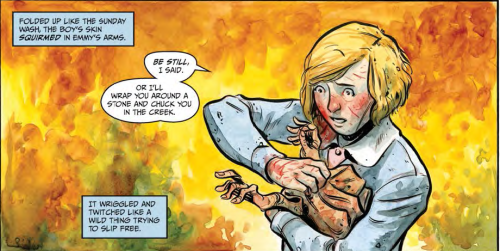 It is on the cusp of womanhood (read independence, sexuality, etc.) that Emmy’s father tries to kill her - her powers indicate the supposed 'evil' in her. Emmy escapes her father and, through her friendship with Bernice (also an outsider, due to the colour of her skin), Emmy comes to terms with being a witch.

The first arc of Harrow County tackles, head-on, the most common element of the witch story: women being punished for their inherent natures. Emmy has no control over her connection to the supernatural, yet her own father is still willing to kill her for it. That it is a man in a position of power who attempts this is both a potent metaphor and an all-too-real part of history.

Female friendship is Emmy’s saviour, and it is no surprise that sorority (another key element of witch mythology) is often depicted as part of a threat to male hegemony. Taking this element of the witch story and turning it into such a positive is part of what sets this creepy, existential, horror story apart. It is Emmy’s friendship with Bernice that, in the end, helps her overcome her fears. She even forgives her father for his actions, avoiding the ‘vengeful woman’ cliché so often tied in with the negative representations of witchcraft. In fact, it is the positive aspects of witchcraft - sisterhood, understanding and a connection with the natural world - that help Emmy overcome the brutality of her father’s actions. 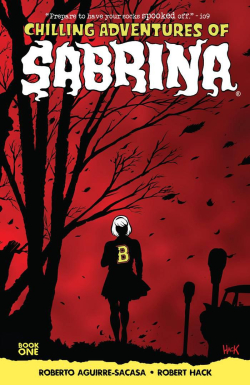 Written by Roberto Aguirre-Sacasa and illustrated by Robert Hack, Chilling Adventures is part of the Archie Comics horror line and sends Sabrina back to a 1960s setting. Using this historical time period -  a decade of changing attitudes - helps polarise Sabrina’s position not only as a girl halfway between the worlds of the witches and regular humans, between girlhood and womanhood, but also between the old and new ways of thinking. The old hidebound rules of the witches represent the old way, the coven standing in for the stratified social systems of family and motherhood that constrained women for so long.

Sabrina’s time in the human world - a normal teenage girl in high school - shows all the new attitudes of the 1960s. There, Sabrina is dating a football player, studying In Cold Blood and trying to get the big role in the school adaptation of Bye Bye Birdie. She looks up to the new drama teacher, Ms. Porter who, unfortunately, turns out to be a long-thought-dead witch with a grudge against the Spellman family.  Ms. Porter (a.k.a. Madam Satan) is herself something of a dichotomy. In her mortal guise she is a sympathetic confidante, a no-nonsense woman with the tell-tale ‘Ms.’.  When we see her in her witchy moments, however, she’s driven by jealousy, lust and vanity, a trio of sins classically assigned to 'witchy' women. In Chilling Adventures, Sabrina’s attempts to move away from this outdated view of femininity that provides so much of the comic's thematic tension and makes its witches so compelling. 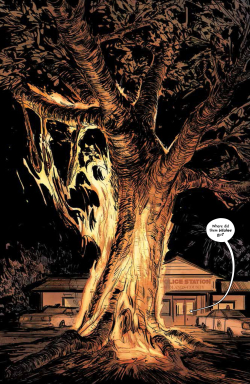 Redlands, written and coloured by Jordie Bellaire, with art by Vanesa Del Rey, is, like Harrow County, set in the South. It uses witchcraft as a lens to talk more widely about otherness and oppression.

Redlands' story begins depicting a form of fascist fantasy with the white, male police force imprisoning a group representing ‘others’; women, African Americans, alternative types with tattoos, etc. The first page of the comic depicts a burning tree with three empty nooses and the question, “Where did them bitches go?”.

The ‘bitches’ in question are actually witches and this comic starts with an act of female rebellion as they refuse to quietly go to their deaths. Instead they work bloody revenge and set free the (literal) captives of the (metaphorical) patriarchy. Redlands, therefore, casts a wider net than the coming-of-age stories of Harrow County and Chilling Adventures. While the latter extends its themes to cover societal change in the ‘60s, Redlands pushes even further.

Redlands is also the most adult of the three series. Bellaire’s script includes a lot of sex - her witches and ‘others’ are always seemingly seconds away from intercourse. Sexuality is always present in Del Rey’s artwork, with a leering focus on arms, mouths, chests and other, less family-friendly, body parts.

At time of writing, Redlands has only has three issues, so it’s harder to discuss the story without wandering into the realms of pure speculation.  So far, however, it seems clear to say that witches are symbolic of a force outside of traditional systems of control. In the first issue, they defeat the redneck police force and establish their own authority. Yet the witches continue to inhabit outsider areas: swamps and back-roads.  In this story, witches are not only powerful women but also champions for the outcast and unwanted elements of society.

In these modern depictions, then, the witch has come full circle. Originally wise women (and men) working their power to aid those they could, witches became figures of fright. Accusations of witchcraft were used to dispatch or control troublesome women and the witch became a symbol of all the negative aspects of women. The notion of a powerful or unconventional woman was something to despise or mock, lumping in virtues with vices and turning ‘independence’ into a filthy word for women. 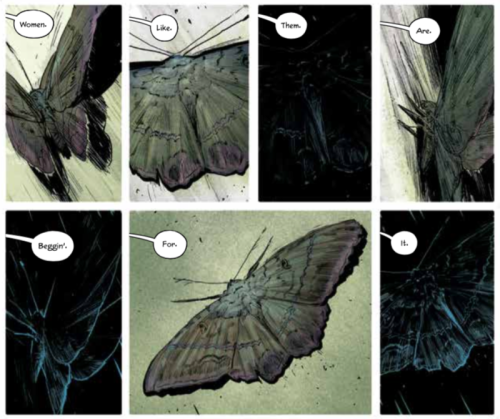 As these three comics have shown, this depiction of witches is not so prevalent as it once was. Be it a celebration of sexuality, otherness, changing attitudes, growing up or fighting for rights, witches are being used to present a multitude of positive responses to outmoded views.

It is no coincidence that both Harrow County and Redlands are set in the American South and Chilling Adventures of Sabrina in a New England(ish) town. These are parts of America with a deep connection to their historical roots - and are perfect settings for stories that involve new attitudes bumping up against old ways. It is also not strange that all three share a hazy, autumnal palette, evoking a dying off and coming rebirth.

Witches have always changed with the times - and here, in 2017, they are taking on a new and potent cultural relevance.