Pornokitsch
Reviews Books Comics Film Fiction Index
Malls, Mallrats and Browsing
Pennywise and Paper-Thin: Why IT’s clown is too two-dimensional to be terrifying 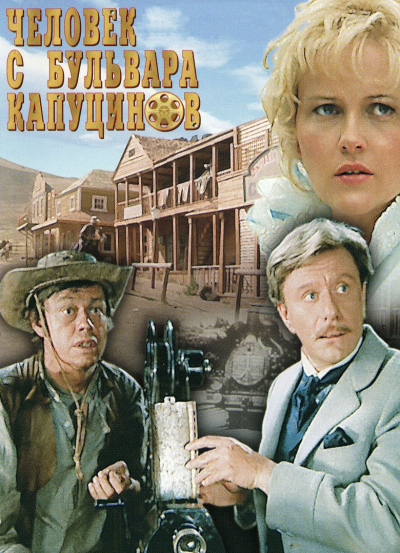 As absurd as it sounds, the film is distinctive for reasons other than its silliness. It’s unusual in several ways, being both a rare “red” western (a post-modern one at that), and also a western directed by a woman; Russian-Soviet director Alla Surikova. In a world where female-written or directed westerns are relatively few and far between (hat tip, Kelly Reichardt), A Man from the Boulevard des Capucines leapt out as being worthy of attention.

A Man from the Boulevard des Capucines is a boss-eyed sort of film, with one gaze fixed firmly on itself, the other twinkling knowingly at the audience. It parodies western conventions, as well as cinematic traditions like slapstick and melodrama with great gusto and fondness. The first scene pitches us headfirst into this mix: an old-fashioned knockabout-style stagecoach robbery, complete with gun-toting grannies.

Inside the stagecoach travels Mr First, a neatly dressed gentleman who continues to read, rather than fight. When Black Jack, the dastardly leader of the bandits finally confronts the passengers, he snatches Mr First’s book, thinking it’s a bible, only to find himself holding A History of World Cinema. The film gives the audience it’s first big, wink.

Black Jack: But even I can discern that some pages are empty.

Johnny First: It’s the place for history, sir. Dare it, and your name might be written there. They wait for their heroes.

Mr First is a cinematographer, for whom the promotion of cinema is an almost holy mission. With the above conversation, A Man from the Boulevard des Capucines fires a bullet into the dead centre of its aim: to critique the mythologization of the West, while simultaneously revealing the power of cinema to alter that reality, for better or worse.

Johnny First’s destination, the frontier town of Santa Carolina, gives us another huge dollop of old-school cinematic clowning in the form of one of the longest bar fights I’ve ever seen. Harry, the landlord, watches gleefully as ne-er-do-wells smash up his saloon (in a joyfully choreographed brawl, of course) knowing that he’ll make a tidy profit in damage charges; a brash nudge about the destructiveness of capitalism.

Into this beefsteak-eating, chair-swinging world walks the elegant Mr First, bringing cinema – not religion – to the masses. After being dazzled by the gun-toting saloon singer Diana (CUE SONG AND DANCE NUMBER), he meets hangdog cowboy Billy, who yearns for something “light and huge” in his life. First has the answer. Diana, enthralled by his charming manners, lends him her white bed sheet, and Mr First gets to work, setting up his projector to introduce the rowdy cowboys to the magic of cinema.

When he shows them the Arrival of a Train at La Ciotat (1895) by the Lumière Brothers, the cowboys flee the saloon in terror, only to return, fascinated by the new entertainment. When he shows them the world’s first comedy film, The Sprinkler Sprinkled (1895), it has them giggling like children. Billy, in particular, is smitten.

Of course, the red-faced, rapaciously capitalist Harry is keen to profit from First’s projector.

Harry: I’m sure you realise that rapture is best when it’s converted to gold.

But Mr First is no businessman. He reveals that, when he first experienced the cinematograph one night at the Lumière Theatre on the Boulevard des Capucines, he saw a way out of the “blood, sin and avarice” of the world.

The film’s satirical element is reflected in Johnny First’s actions: he literally uses the medium of cinema to shame the cowboys into improving themselves, by showing films of respectful behaviour, of how to be a “gentleman”. Almost overnight, the cowboys change, drinking milk instead of whiskey, addressing each other as “sir”, and refusing to indulge in brawls.

Once again, beyond its goofball silliness, Surikova is aiming both barrels at the film’s message. Mr First realises, and acts upon, cinema’s ability of alter reality, its ability to reshape the world, and thus manipulate history itself; just as the history of the Old West was fictionalised even as it occurred. (The pioneering 1903 film The Great Train Robbery was made only three years after the events that inspired it took place. At the time it was touted as “a faithful duplication of the genuine “Hold Ups” made famous by various outlaw bands in the far West.").

So Surikova’s film has one eye on her present reality in 1987: in this case, the faltering of ideals of the Soviet grand narrative, thanks to perestroika.

This is a pretty scatty film in many ways. It ricochets between silliness and critique, knockabout humour and knowingness, criticism and homage. The songs themselves seem to burst through at random intervals, and, to be honest, don’t add much to the film. Much better is the use of melody and refrain throughout; as the film slides between post-modernism and parody, so the music flits between diegetic and non-diegetic, the player piano of the saloon morphing boisterously into the soundtrack to accompany a town brawl.

Editing-wise, don’t expect seamless transitions. The cutting jounces us mercilessly between shots, which, during action sequences, can be a bit disorientating and confusing. On occasion too, Surikova’s nudges and winks become a little wearing, especially during the second half of the film, which seems more like a series of vignettes taped together, and definitely could have done with a few feet snipped off the reel.

But then, none of these things are particularly out of character with the rest of the film. I mean, even the sentence “Post-modern musical comedy western from the 1980s” has a lot going on. Small wonder the film feels a tad eccentric at times. 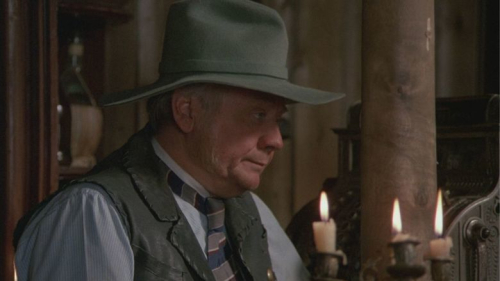 Like I said, there are several jokes and scenes that stray too far into directorial ventriloquism, and feel a bit indulgent. But there are other moments that, despite their broad brushstrokes, work with the film’s point about the power of cinema. When the lascivious town priest tries to turn the women of Santa Carolina against First and his cinematograph, the plan backfires spectacularly: the woman storm the cinema, chanting: “We want movies! A woman is a movie-goer too!”

The local drugstore owner looks on, commenting to himself:

“If a woman asks for something, she should be granted this by all means, or she’ll take it herself.”

Of course, no examination of cinema is without its dark side, just as no white hat riding into “civilise” the town is without enemies. Ultimately, the villain of A Man from the Boulevard des Capucines is not Black Jack, but money itself. Saloon owner Harry yearns for the old days, when his patrons were drunken louts he could exploit for capital gain. He tries everything to put First out of business: destroying the white sheet (it’s ok, Diana weaves another one out of her horse’s mane and her own hair), burning First’s films, even hiring Black Jack to assassinate him, all to no avail.

It’s only when Johnny leaves town for a few days to buy Diana a wedding gift that Harry finally succeeds. No sooner has he gone, than a Mr Second arrives: a cinematographer of a very different persuasion. Mr Second’s films are gratuitous, encouraging violence, vice and bad behaviour, much to Harry’s delight and profit.

A dismayed Johnny returns to find all of his civilising work undone; the townspeople worse than ever, fed on their diet of cinematic “junk”. Even Billy has fallen into his old ways. As Johnny flees the saloon, fighting his way through a literal tangle of celluloid, Mr Second clips a sheriff’s star onto his lapel. Surikova’s point is clear: Johnny's First’s mission to “civilise” Santa Carolina has failed, not due to the "savagery" of the frontier but due to the moral, intellectual and spiritual deficits within townspeople themselves.

However, in an unexpected and rather touching twist, Johnny is met on the road out of town by Black Jack. Despite First’s failure in Santa Carolina, it seems that the cinema has saved one man. Black Jack, after seeing a Charlie Chaplain film through the saloon window, is captivated, and pledges his life to First and the medium of cinema.

Black Jack: From now on my colt and my fists are at your service. But I must take revenge on Mr Second. He has desecrated the name of cinema. He sows the seeds of hatred in the audience’s souls.

Johnny First: Don’t do it Jack. To each his own. The future will judge us. Our audience is waiting.

Together, the cinematographer and the ex-bandit ride into the sunset (joined by Diana, who shoots off both of their hats).

Eccentric, silly, unexpected, and altogether cleverer than it wants you to think, A Man from the Boulevard des Capucines deserves to be better known, so it can try to, as Johnny sings over the end credits, “add a bit of light to the severe days of souls.”